In March 2012, the Physical Review Letters published results from an international collaboration of scientists’ groundbreaking calculation that showed a kaon decay into two pions, a major first step in providing evidence of asymmetry in the universe — why there is more matter than antimatter. The scientists, including four from Brookhaven Lab and the RIKEN-BNL Research Center (RBRC) on site, were recognized at the 30th International Symposium on Lattice Field Theory in June, when they were given the Ken Wilson Lattice Award for their major findings. 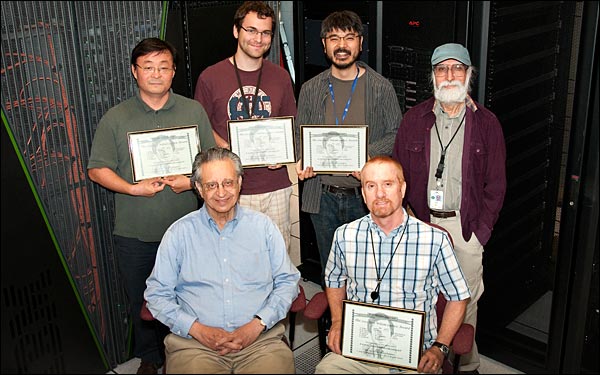 Awardees are (back row, from left) Chulwoo Jung, Christoph Lehner, Taku Izubuchi, Amarjit Soni from Brookhaven and the RBRC, and (front row, from right) Tom Blum from the University of Connecticut, with RBRC Director Nicholas Samios, in front of the new supercomputer at Brookhaven, QCDCQ.

The annual award is given to recognize a paper that has broad impact to enable new research in lattice field theory, which is used to calculate the “strong” interactions between quarks and gluons. Taku Izubuchi, Chulwoo Jung, Christoph Lehner, and Amarjit Soni of Brookhaven and the RBRC shared the prize with other 12 collaborating scientists from Columbia University, University of Connecticut, Washington University, the University of Edinburgh and University of Southampton in the United Kingdom, and the Max Planck Institute for Physics in Germany.

“I am honored to be recognized with my collaborators among our peers,” said Izubuchi, a leader of the RBRC Computing Group. “It is exciting to work with great scientists and the most advanced tools of our time to learn why the universe is the way it is.”

The subatomic particle decay process that the scientists calculated using some of the most powerful supercomputers in the world is the same process that four physicists at Brookhaven — James Christenson, James Cronin, Val Fitch, and Rene Turlay — first observed at Brookhaven’s Alternating Gradient Synchrotron in an experiment in 1964. Cronin and Fitch won a Nobel Prize for Physics for this work that revealed the first experimental evidence of a charge-parity (CP) violation: a flaw in the commonly held view of the time that the universe is symmetrical.

The recent calculation builds on work done since 1964 and is a major development in testing facets of the standard model of particle physics — the theory to describe the fundamental particles of matter and how they interact. Major components of the calculation were done using the RBRC supercomputer QCDOC. That supercomputer, and others, allowed the researchers to perform mathematical operations using new techniques that they developed to determine an unknown quantity that is important in understanding kaon decay and its relation to CP violation.

Earlier this year, QCDOC was retired and replaced with RBRC’s next generation supercomputer, QCDCQ, which is now being used to complete the calculation of matter/antimatter asymmetry and to address many other important issues.

“The new QCDCQ is already being used to perform calculations that are more significant and were not possible before,” Izubuchi explained. “We look forward to more interesting discoveries in the future.”