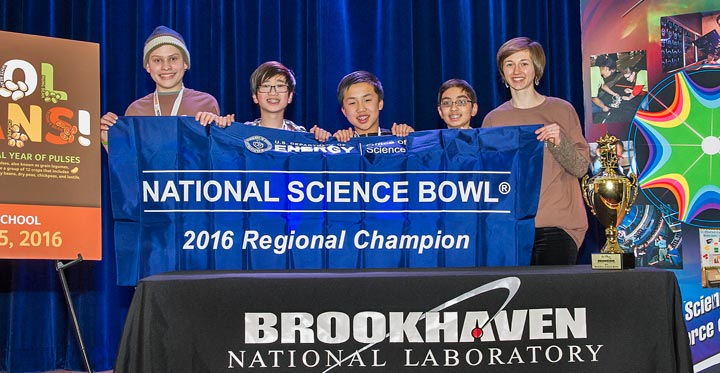 Pictured with their coach, Kimberly Gromov, are the students from Commack Middle School who won first place in the Middle School Science Bowl at Brookhaven Lab on March 5. From left to right are: Riley Bode, Andrew Wang, Nathan Cheung, and Faizali Rahim.

UPTON, NY — Commack Middle School won the Brookhaven National Laboratory/Long Island Regional Middle School Science Bowl held at the Lab on Saturday, March 5, 2016.  Commack students competed against 19 teams from 13 schools across the region in one of the nation's 50 regional competitions in the Annual U.S. Department of Energy National Science Bowl®. 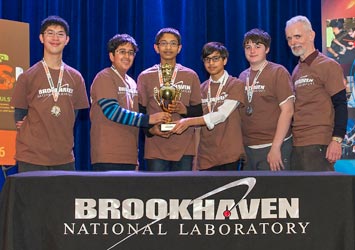 Pictured with their coach are the students from R.C. Murphy Junior High School in Stony Brook who took second place in the Middle School Science Bowl held at Brookhaven Lab on March 5.

Student teams are comprised of four students, one alternate, and a teacher who serves as an advisor and coach. These teams face off in a fast-paced, question-and-answer format, being tested on a range of science disciplines including life science, earth and space science, energy, mathematics, and general science. The team answering the most questions correctly wins the top honor.

"This was my first year as a coach and we were up against some tough competitors from other schools, but I am very happy that the hard work of my students paid off," said Commack's coach and 7th grade science teacher, Kimberly Gromov. "We all look forward to going to Washington D.C. for the national competition. I'm sure it will be a great experience for these 8th grade students." 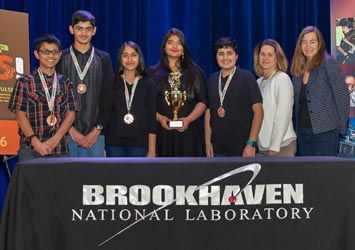 Pictured with their coaches are the students from Clarke Middle School in Westbury who placed third in the Middle School Science Bowl held at Brookhaven Lab on March 5.

Commack student captain Riley Bode added, "My dream is to become an engineer and my favorite subjects are math and science, so this was a great day for me and our team. We're going to work hard to get ready for Washington D.C.!"

Pictured with their coaches are students from William Floyd Middle School in Shirley who placed fourth in the Middle School Science Bowl held at Brookhaven Lab on March 5.

"The National Science Bowl® continues to be one of the premier academic competitions across the country, and prepares America's students for future successes in some of the world's fastest growing fields in research and engineering," said U.S. Energy Secretary Ernest Moniz. "I congratulate these students for advancing to the National Finals, where they will be among some of the brightest science and math students from across the country."

The competition at Brookhaven is sponsored by Brookhaven Science Associates (BSA), the company that manages and operates the Lab for the U.S. Department of Energy. BSA provides additional support as well as Science Bowl t-shirts for all participating students and the trophies and medals for the winning teams.