The following news release was originally issued by Science Foundation Ireland on March 16, 2016. 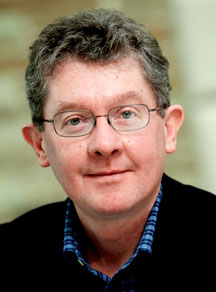 WASHINGTON, U.S. — Science Foundation Ireland is delighted to announce that its prestigious 'Science Foundation Ireland St. Patrick's Day Science Medal' was presented by Mr Charles Flanagan, Minister for Foreign Affairs and Trade, today to the 2016 medal recipients, Dr. Craig Barrett and Professor Séamus Davis in Washington D.C. as part of the St Patricks' Day celebrations. Now in its third year, the SFI St. Patrick's Day Science Medal recognises the extraordinary contributions made by U.S.-based scientists, engineers or technology leaders with Irish connections. This year, for the first time, the medal is being presented to two recipients, each leading figures in their respective industry and academic communities.

Dr. Craig Barrett is a leading advocate for improving education in the U.S. and around the world. He is also a vocal spokesman for the value technology can provide in raising social and economic standards globally. Having held the positions of Chairman, CEO and President of Intel Corporation, Dr. Barrett has contributed significantly to the Irish high-tech industry, playing a pivotal role in the establishment of Intel's European manufacturing base in Leixlip, Co. Kildare, and promotion of Ireland, globally, as a high-tech centre.

Professor Séamus Davis' research has been at the forefront of modern physics for more than 30 years.  He is most notable for his inventive and wide-ranging contributions to the physics of quantum materials. His work focuses on the exploration and visualization of electronic structure and behavior at the atomic level, and the exotic new forms of quantum matter found in these advanced materials. Professor Davis is the JG White Distinguished Professor of Physics at Cornell University, the SUPA Distinguished Professor of Physics at St. Andrews University, and also a Senior Physicist at the U.S. Department of Energy's Brookhaven National Laboratory. He is a graduate of University College Cork and has extensive personal and research links with Ireland.  He is a frequent visitor and speaker at University College Cork, Tyndall National Institute, Royal Irish Academy and University College Dublin and has worked with the CRANN Research Institute in an advisory nature. 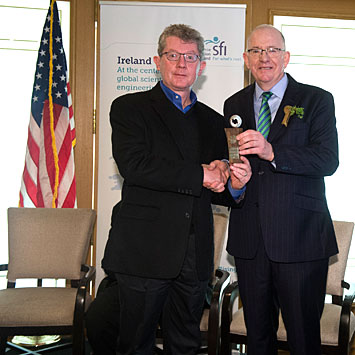 Congratulating Dr. Craig Barrett and Professor Séamus Davis, Mr Charles Flanagan, Minister for Foreign Affairs and Trade, said; "I am delighted to present the SFI St. Patrick's Day Science Medals to Dr. Barrett and Professor Davis here in Washington D.C. The St. Patrick's Day Science Medal recognises the outstanding achievements of U.S.-based scientists, engineers or technology leaders who have a strong connection to Ireland and are playing an important role in academic and industry based scientific research.

Dr. Barrett is recognised across the world for his personal achievements in both science and engineering.  However, today we are also recognising his contribution to the Irish high-tech industry and his ongoing commitment to the future of the Irish economy at home and with the Irish diaspora.

As senior vice president of Intel, Dr. Barrett played a pivotal role in the establishment of Intel's European manufacturing base in Leixlip, Co. Kildare in 1989.  The Leixlip site helped Ireland to become a recognised player on the global high-tech stage.  Since his retirement, he has continued to play a high profile role in developing and promoting Ireland as a technology hub."

This is a wonderful honour, not only for me but for all the scientists at institutions worldwide that form our collaborative research network.

Professor Mark Ferguson, Director General of Science Foundation Ireland and Chief Scientific Adviser to the Government of Ireland said; "The Science Foundation Ireland St. Patrick's Day Science Medal recipients have illustrated the power and impact of international collaboration in science and industry and have proved how Ireland can play at the highest level in this sphere.  The global reach and influence of the Irish diaspora in supporting Irish scientific research both academic and industrial is vital in developing Ireland's future scientific achievements.  The work of Professor Davis and Dr. Barrett has served Ireland well at home and has also enhanced our reputation internationally. They have truly blazed an extraordinary trail and I am delighted to present them with the 2016 SFI St. Patrick's Day Science Medals today."

At the event in Washington, D.C., Dr. Barrett said; "It is a great honour to receive the SFI St. Patrick's Day Science Medal. I believe that Ireland is a place where the science and industry communities converge and work together for societal and economic benefit. My efforts with many organisations in Ireland to advance the STEM agenda to provide an impetus for the next generation of science, technology, engineering and mathematics leaders are a great example of this collective work. I want to thank Science Foundation Ireland for this recognition today."

On accepting his SFI St. Patrick's Day Science Medal, Professor Davis said; "This is a wonderful honour, not only for me but for all the scientists at institutions worldwide that form our collaborative research network. This award highlights exciting opportunities now emerging from networking the scientific research communities in Ireland and here in the United States. Both countries benefit from this positive relationship, with cross-Atlantic collaboration now playing a vital role in the success of many of the most advanced scientific projects. This Science Medal is also a testament to the world-leading quality of scientific education in Ireland, and to the deep commitment to promote and enhance Ireland's educational standards today. I am extremely grateful to Science Foundation Ireland for this medal and I express my gratitude to my family especially all those at home in Ireland, and to all my colleagues, past and present."

The SFI St. Patrick's Day Science Medal was commissioned by SFI in consultation with the Design & Crafts Council of Ireland. Jeweller Martina Hamilton, based in County Sligo, was selected to create the medal. Previous winners of the medal include:

Craig Barrett started his career in Stanford University, studying metallurgical engineering, and achieved his B.S, M.S, and Ph.D. there. His academic career was very successful, he joined the faculty at Stanford and also researched and lectured abroad. Craig Barrett's extraordinary contribution to the technology industry began when he joined the world of industry in Intel in 1974.  During his tenure he progressed to the most senior positions (CEO and Chairman of the Board) in the company.

Since his retirement from Intel, Barrett continues to contribute to academia, education projects, STEM industry development and many organisations involved in Ireland's economic development. He has been Chair of the National Academy of Engineering in the United States, contributes to the Global Irish Economic Forum and is Chairperson of the Irish Technology Leadership Group.

Séamus Davis is from Skibbereen in Co. Cork. He received his B. Sc in Physics from University College Cork and his Ph. D. from the University of California – Berkeley. Having worked as Professor of Physics at the University of California – Berkeley and at Cornell University, he was appointed as SUPA Distinguished Research Professor of Physics at St. Andrews University in Scotland and also as J.G. White Distinguished Professor of Physics at Cornell University. He has also worked as Director of the Center for Emergent Superconductivity, an Energy Frontier Research Centre run by the US Department of Energy at Brookhaven National Laboratory, where Davis is a Senior Physicist. His studies of quantum matter including superconductors, superfluids, supersolids, heavy-fermions, and quantum spin liquids are recognised world-wide. He has had a major influence on quantum matter research as the novel experimental techniques he has pioneered spread throughout the physics world. To cite one achievement, the type of spectroscopic imaging scanning tunnelling microscope he developed has since spawned a worldwide revolution in electronic quantum matter studies, and replicas of this instrument have now been built in labs at many of the word's leading research universities

Science Foundation Ireland funds oriented basic and applied research in the areas of science, technology, engineering, and mathematics (STEM) which promotes and assists the development and competitiveness of industry, enterprise and employment in Ireland. The Foundation also promotes and supports the study of, education in and engagement with, STEM and promotes an awareness and understanding of the value of STEM to society and in particular to the growth of the economy. For more information, visit www.sfi.ie