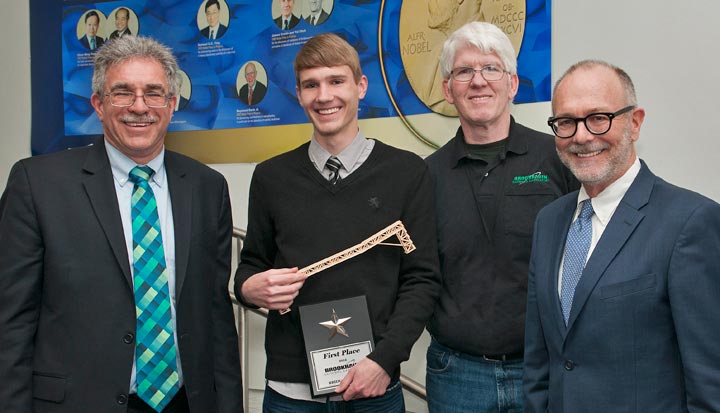 More than 170 high school students from 12 Nassau and Suffolk County high schools submitted more than 85 bridges for the competition, for which they designed, constructed, and tested model bridges intended to be simplified versions of real-world bridges. This year's bridge-building requirements included criteria that represented how a real bridge would be constructed to allow large barges to safely pass under a bridge. In addition to building an efficient bridge with a maximum mass of 25 grams to span a gap of 300 millimeters (mm), the bridge also required a loading plane that allowed a 60mm high by 160mm wide testing fixture to pass clearly under the bridge when it was placed on a flat surface. 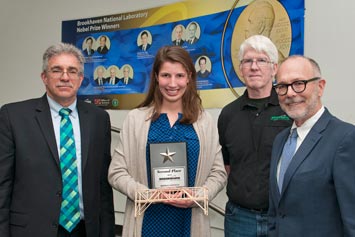 Katherine Hegermiller of Sacred Heart Academy in Hempstead placed second in the contest with a   bridge that weighed 22.98 grams with an efficiency of 1261.097. 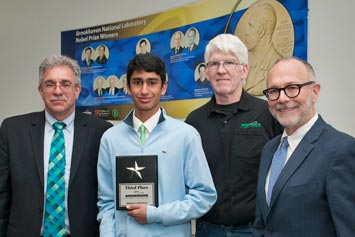 The construction and testing of model bridges promotes the study and application of principles of physics and engineering, and helps students develop "hands on" skills. Students get a flavor of what it is like to be an engineer, designing structures to a set of specifications and then seeing them perform their function. 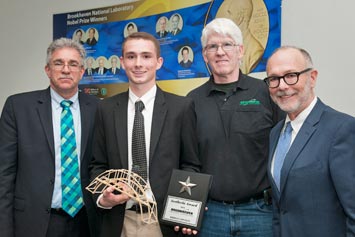 At an awards ceremony held at the Lab on April 1, Brookhaven Lab engineer Don Lynch, who tests and crushes every bridge submitted to the contest, explained how each bridge was different, yet meet the difficult criteria. "The students did an amazing job at constructing their bridges. I congratulate them on their hard work and wish them good luck at the national contest in May. I believe these students are on their way to a successful career in engineering," said Lynch.

John Carter of the U.S. Department of Energy's Brookhaven Site Office encouraged the students to pursue careers in science and engineering.  "Our nation needs future scientists, engineers, and leaders. If these scientific competitions help students to embark on a career in science or engineering – mission accomplished," said Carter. "I hope you continue your exploration, wherever it may take you."