Brookhaven's Oleg Gang Named a Battelle 'Inventor of the Year' 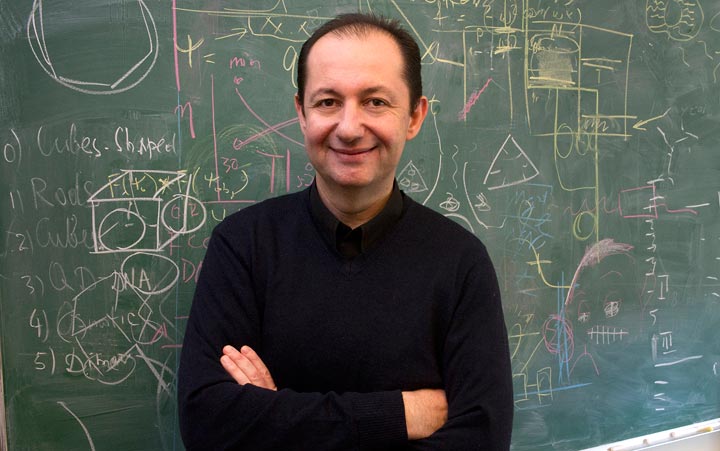 Oleg Gang, a physicist at Brookhaven Lab's Center for Functional Nanomaterials, has been named a Battelle "Inventor of the Year."

UPTON, NY — Oleg Gang, a physicist developing a novel strategy using DNA to guide the self-assembly of nanoparticles at the U.S. Department of Energy's (DOE) Brookhaven National Laboratory, is being honored as an "Inventor of the Year" by Battelle, the global science and technology organization that, together with Stony Brook University, manages Brookhaven Lab through the company Brookhaven Science Associates. The annual awards recognize individuals who have made significant scientific or engineering contributions with important societal or financial impacts. Gang, whose work may lead to the design of new "tunable" materials for applications in energy, medicine, and more, was honored at a "Celebration of Solvers" held by Battelle at the Columbus Museum of Art in Ohio on April 22, 2016.

"I am very fortunate to work in the Brookhaven Lab team environment, rich with talented people and state-of-the-art facilities."

Gang works at Brookhaven's Center for Functional Nanomaterials (CFN), a DOE Office of Science User Facility where scientists are seeking ways to take advantage of unusual properties that emerge by controlling the arrangements of particles whose dimensions are thousands of times smaller than the diameter of a human hair. Achieving specific arrangements of such small-scale building blocks is a huge challenge. Gang's strategy to overcome this challenge uses chains of synthetic DNA as a type of  "glue" that encourages nanoparticles to assemble themselves in a desired way. The work could lead to the design of better catalysts, solar cells, biological sensors, and more.

"I am very fortunate to work in the Brookhaven Lab team environment, rich with talented people and state-of-the-art facilities," said Gang. "This environment makes it possible to transfer ideas to realization efficiently, and there is nothing more exciting than to see that happening. "

Gang's technique takes advantage of the specificity of binding between the four bases that make up strands of DNA (commonly known by the letters A, T, G, and C) and the ability to program DNA to get complementary strands and their tethered nanoparticles to link up into larger scale, three-dimensional, well-ordered structures. So far, this approach has resulted in a variety of nanoparticle assemblies, including composite structures with switchable phases whose optical, magnetic, or other properties might be put to use in dynamic energy-harvesting or responsive optical materials, and even materials with multifunctional, synergistic properties.

Brookhaven Lab's Oleg Gang describes the idea of using DNA to drive the self-assembly of materials from nanoscale particles.

"This work has opened a new direction for the self-assembly of nanoparticles, which makes it possible to design and prepare a new class of materials with novel properties, and whose long-term economic impact, though difficult to quantify at the moment, is undeniable," said Emilio Mendez, former director of the CFN and now Director of the Energy Science and Technology Department at Brookhaven Lab.

Gang, who lives in Setauket, earned a bachelor's degree in physics from Chernivtsi National University, Ukraine, in 1991, a master's degree in physics and a Ph.D. in soft matter physics, both from Bar-Ilan University, in 1994 and 2000, respectively. He was a postdoctoral Rothschild Fellow at Harvard University from 1999 to 2002, joining BNL as a Goldhaber Fellow in 2002. He became an assistant scientist at the Lab's CFN in 2004, with a promotion to scientist in 2009, and has led the CFN's Soft and Biological Nanomaterials Theme Group since 2006. Gang holds five patents, and he has received several honors for his research, including the University Distinction Award and the University President's Award, both from Bar-Ilan University, a Wolf Foundation Scholarship for outstanding Ph.D. research, and the 2010 Gordon Battelle Prize for Scientific Discovery. In 2014 he was selected as a fellow of the American Physical Society.

Gang's work at the CFN is funded by the DOE Office of Science (BES).

The Center for Functional Nanomaterials at Brookhaven National Laboratory is one of the five DOE Nanoscale Science Research Centers (NSRCs), premier national user facilities for interdisciplinary research at the nanoscale. Together the NSRCs comprise a suite of complementary facilities that provide researchers with state-of-the-art capabilities to fabricate, process, characterize and model nanoscale materials, and constitute the largest infrastructure investment of the National Nanotechnology Initiative. The NSRCs are located at DOE's Argonne, Brookhaven, Lawrence Berkeley, Oak Ridge and Sandia and Los Alamos national laboratories.