RICHLAND, Wash. and Berkeley, Calif.—Researchers are investigating a new material that might help in nuclear fuel recycling and waste reduction by capturing certain gases released during reprocessing. Conventional technologies to remove these radioactive gases operate at extremely low, energy-intensive temperatures. By working at ambient temperature, the new material has the potential to save energy, make reprocessing cleaner and less expensive. The reclaimed materials can also be reused commercially.

Appearing in Nature Communications, the work is a collaboration between experimentalists and computer modelers exploring the characteristics of materials known as metal-organic frameworks. 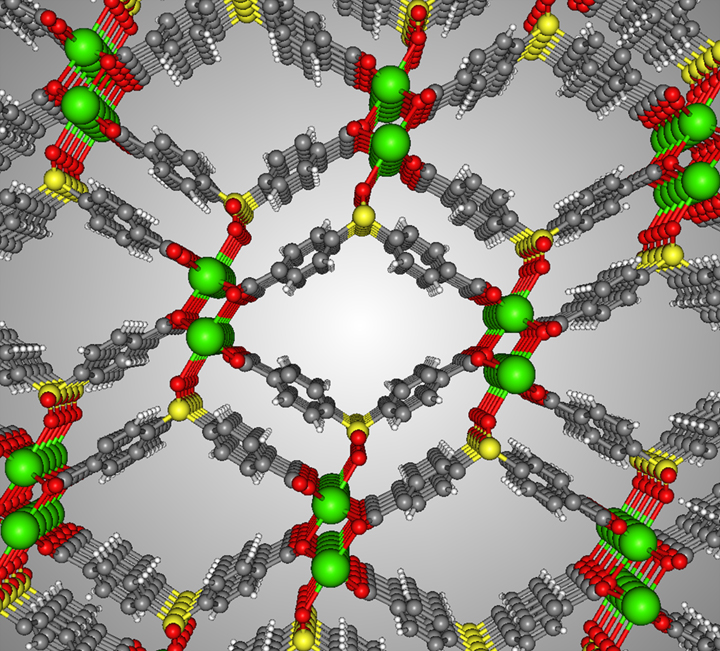 A molecular model of a new metal organic framework (MOF) which selectively traps xenon, a gas that is released during reprocessing of nuclear fuel.

"This is a great example of computer-inspired material discovery," said materials scientist Praveen Thallapally of the Department of Energy's Pacific Northwest National Laboratory. "Usually the experimental results are more realistic than computational ones. This time, the computer modeling showed us something the experiments weren't telling us."

Recycling nuclear fuel can reuse uranium and plutonium — the majority of the used fuel — that would otherwise be destined for waste. Researchers are exploring technologies that enable safe, efficient, and reliable recycling of nuclear fuel for use in the future.

A multi-institutional, international collaboration is studying materials to replace costly, inefficient recycling steps. One important step is collecting radioactive gases xenon and krypton, which arise during reprocessing. To capture xenon and krypton, conventional technologies use cryogenic methods in which entire gas streams are brought to a temperature far below where water freezes — such methods are energy intensive and expensive.

Thallapally, working with Maciej Haranczyk and Berend Smit of Lawrence Berkeley National Laboratory and others, has been studying materials called metal-organic frameworks, also known as MOFs, that could potentially trap xenon and krypton without having to use cryogenics.

These materials have tiny pores inside, so small that often only a single molecule can fit inside each pore. When one gas species has a higher affinity for the pore walls than other gas species, metal-organic frameworks can be used to separate gaseous mixtures by selectively adsorbing.

To find the best MOF for xenon and krypton separation, computational chemists led by Haranczyk and Smit screened 125,000 possible MOFs for their ability to trap the gases. Although these gases can come in radioactive varieties, they are part of a group of chemically inert elements called "noble gases." The team used computing resources at NERSC, the National Energy Research Scientific Computing Center, a DOE Office of Science User Facility at LBNL.

"Identifying the optimal material for a given process, out of thousands of possible structures, is a challenge due to the sheer number of materials. Given that the characterization of each material can take up to a few hours of simulations, the entire screening process may fill a supercomputer for weeks," said Haranczyk. "Instead, we developed an approach to assess the performance of materials based on their easily computable characteristics. In this case, seven different characteristics were necessary for predicting how the materials behaved, and our team's grad student Cory Simon's application of machine learning techniques greatly sped up the material discovery process by eliminating those that didn't meet the criteria."

The team's models identified the MOF that trapped xenon most selectively and had a pore size close to the size of a xenon atom — SBMOF-1, which they then tested in the lab at PNNL.

Usually the experimental results are more realistic than computational ones. This time, the computer modeling showed us something the experiments weren't telling us.

After optimizing the preparation of SBMOF-1, Thallapally and his team at PNNL tested the material by running a mixture of gases through it — including a non-radioactive form of xenon and krypton — and measuring what came out the other end. Oxygen, helium, nitrogen, krypton, and carbon dioxide all beat xenon out. This indicated that xenon becomes trapped within SBMOF-1's pores until the gas saturates the material.

Other tests also showed that in the absence of xenon, SBMOF-1 captures krypton. During actual separations, then, operators would pass the gas streams through SBMOF-1 twice to capture both gases.

The team also tested SBMOF-1's ability to hang onto xenon in conditions of high humidity. Humidity interferes with cryogenics, and gases must be dehydrated before putting them through the ultra-cold method, another time-consuming expense. SBMOF-1, however, performed quite admirably, retaining more than 85 percent of the amount of xenon in high humidity as it did in dry conditions.

The final step in collecting xenon or krypton gas would be to put the MOF material under a vacuum, which sucks the gas out of the molecular cages for safe storage. A last laboratory test examined how stable the material was by repeatedly filling it up with xenon gas and then vacuuming out the xenon. After 10 cycles of this, SBMOF-1 collected just as much xenon as the first cycle, indicating a high degree of stability for long-term use.

Thallapally attributes this stability to the manner in which SBMOF-1 interacts with xenon. Rather than chemical reactions between the molecular cages and the gases, the relationship is purely physical. The material can last a lot longer without constantly going through chemical reactions, he said.

Although the researchers showed that SBMOF-1 is a good candidate for nuclear fuel reprocessing, getting these results wasn't smooth sailing. In the lab, the researchers had followed a previously worked out protocol from Stony Brook University to prepare SBMOF-1. Part of that protocol requires them to "activate" SBMOF-1 by heating it up to 300 degrees Celsius, three times the temperature of boiling water.

Activation cleans out material left in the pores from MOF synthesis. Laboratory tests of the activated SBMOF-1, however, showed the material didn't behave as well as it should, based on the computer modeling results.

The researchers at PNNL repeated the lab experiments. This time, however, they activated SBMOF-1 at a lower temperature, 100 degrees Celsius, or the actual temperature of boiling water. Subjecting the material to the same lab tests, the researchers found SBMOF-1 behaving as expected, and better than at the higher activation temperature.

But why? To figure out where the discrepancy came from, the researchers modeled what happened to SBMOF-1 at 300 degrees Celsius. Unexpectedly, the pores squeezed in on themselves.

"When we heated the crystal that high, atoms within the pore tilted and partially blocked the pores," said Thallapally. "The xenon doesn't fit."

Armed with these new computational and experimental insights, the researchers can explore SBMOF-1 and other MOFs further for nuclear fuel recycling. These MOFs might also be able to capture other noble gases such as radon, a gas known to pool in some basements.

Researchers hailed from several other institutions as well as those listed earlier, including University of California, Berkeley, Ecole Polytechnique Fédérale de Lausanne (EPFL) in Switzerland, Brookhaven National Laboratory, and IMDEA Materials Institute in Spain. This work was supported by the Department of Energy Offices of Nuclear Energy and Science.