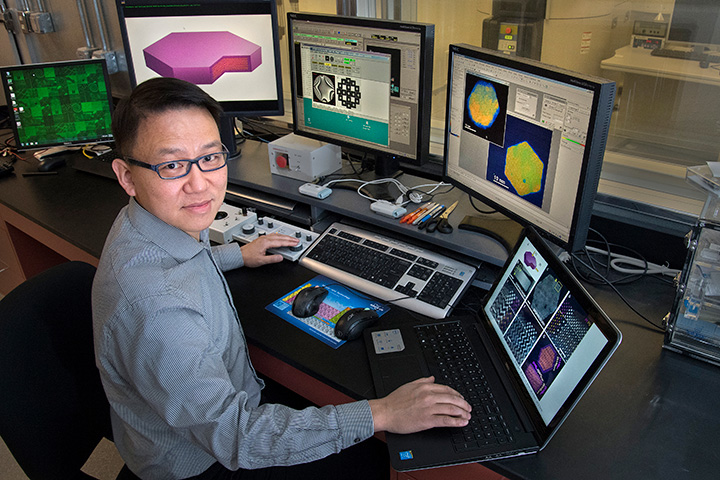 Dong Su in the control room of the aberration-corrected scanning transmission electron microscope (Hitachi HD2700C) at the Center for Functional Nanomaterials, a U.S. Department of Energy Office of Science User Facility at Brookhaven Lab. On the computer screens are images of the platinum-based nanoplates that Su and his collaborators developed. The nanoplates have a thick, ordered shell of platinum that surrounds a platinum and lead alloyed core. This special structure is thought to be behind the high catalytic activity and stability of the nanoplates.

UPTON, NY—Fuel cells are a promising technology for clean and efficient electrical power generation, but their cost, activity, and durability are key challenges to commercialization. Today's fuel cells use expensive platinum (Pt)-based nanoparticles as catalysts to accelerate the reactions involved in converting the chemical energy from renewable fuels—such as hydrogen, methanol, and ethanol—into electrical energy. Catalysts that incorporate less expensive metals inside the nanoparticles can help reduce cost and improve activity and durability, but further improvements to these catalysts are required before these fuel cells can be used in vehicles, generators, and other applications.

Now, scientists from the U.S. Department of Energy's (DOE) Brookhaven National Laboratory, California State University–Northridge, Soochow University, Peking University, and Shanghai Institute of Applied Physics have developed catalysts that can undergo 50,000 voltage cycles with a negligible decay in their catalytic activity and no apparent changes in their structure or elemental composition. As described in a paper published in the December 16 issue of Science, the catalysts are "nanoplates" that contain an atomically ordered Pt and lead (Pb) core surrounded by a thick uniform shell of four Pt layers.

A hydrogen fuel cell works similarly to a battery: it has two electrodes—a negatively charged anode and a positively charged cathode—where the chemical reactions occur, and an acid electrolyte that carries the resulting charged particles from one electrode to the other. Hydrogen enters the fuel cell at the anode, which is coated with a platinum catalyst. When the hydrogen molecules come into contact with the platinum, they split into hydrogen ions and free electrons in a reaction called hydrogen oxidation. The hydrogen ions travel through the electrolyte to the cathode; the electrons travel through an external circuit to generate electricity before arriving at the cathode. In the oxygen reduction reaction (ORR), oxygen molecules combine with the electrons that have completed their circuit and the hydrogen ions to produce water.

The rate of ORR is very slow because molecular oxygen has a very strong double bond that requires significant energy to be broken. As a result, the fuel cell suffers from a reduction in voltage (overpotential) that limits its efficiency.

To date, the most successful catalysts for boosting the activity of the oxygen reduction reaction (ORR)—a very slow reaction that significantly limits fuel cell efficiency—have been of the Pt-based core-shell structure. However, these catalysts typically have a thin and incomplete shell (owing to their difficult synthesis), which over time allows the acid from the fuel cell environment to leach into the core and react with the other metals inside, resulting in poor long-term stability and a short catalyst lifetime.

"The goal is to make the ORR as fast as possible with catalysts that have the least amount of platinum and the most stable operation over time," said corresponding author Dong Su, a scientist at Brookhaven Lab's Center for Functional Nanomaterials (CFN), a DOE Office of Science User Facility, who led the electron microscopy work to characterize the nanoplates. "Our PtPb/Pt catalysts show high ORR activity and stability—two parameters that are key to enabling a hydrogen economy—placing them among the most efficient and stable bimetallic catalysts reported for ORR."

In previous studies, scientists have shown that ORR activity can be optimally enhanced in core-shell catalysts by compressing the Pt atoms on one specific lattice surface plane called Pt(111). This compressive strain is induced by adding metals smaller in size than Pt, such as nickel, to the shell's core, and has the effect of weakening the binding of oxygen to the Pt surface, where the catalytic reaction takes place.

"The ideal ORR catalyst needs to help break bonds (between oxygen molecules) and form bonds (between oxygen and hydrogen), so oxygen can't be too strongly or too weakly bound to the platinum surface," explained Su. "Scientists have focused their research on the compressively strained Pt(111) surfaces, in which Pt atoms are squeezed across the surface, because the oxygen binding energy is optimized. In general, scientists thought that tensile strain on the same surface plane would result in overly strong binding of oxygen and thus hinder the ORR reaction."

But Su and his collaborators showed that introducing a large tensile strain along one direction of a different surface plane, Pt(110), could also improve ORR catalytic activity. They added Pb (which is larger than Pt) to the core of the Pt shell, causing the Pt atoms to stretch across the surface.

After the research group led by Xiaoqing Huang, corresponding author from Soochow University, synthesized the nanoplates, Su characterized their structure and elemental composition at the CFN. Using electron diffraction patterns and images from high-resolution scanning transmission electron microscopy (STEM), both of which reveal the relative positions of atoms, he confirmed the core-shell structure and the composition and sequence of the atoms. To verify that the core contained Pt and Pb and that the shell contained Pt, he measured the change in energy of the electrons after they interacted with the nanoplates—a technique called electron energy-loss spectroscopy.

With this information, the team distinguished how the nanoplates formed with the individual Pt and Pb atoms. To their surprise, the surface planes were not Pt(111) but Pt(110), and these Pt(110) planes were under biaxial strain—compressive strain in one direction and tensile strain in the other—originating from the PtPb core.

Schematic diagram of the oxygen reduction reaction (reduction of O2 into H2O) on the Pt(110) surface of the PtPb/Pt nanoplates, with purple representing Pt atoms and orange representing Pb atoms.

In durability tests simulating fuel cell voltage cycling, Su's collaborators found that after 50,000 cycles there was almost no change in the amount of generated electrical current. In other words, the nanoplates had minimal decay in catalytic activity. After this many cycles, most catalysts exhibit some activity loss, with some losing more than half of their original activity.

Microscopy and synchrotron characterization techniques revealed that the structure and elemental composition of the nanoplates did not change following durability testing. "The electron microscopy work at CFN was critical in explaining why our nanoplates showed such high catalytic activity and stability," said Huang.

Compared to commercial Pt-on-carbon (Pt/C) catalysts, the team's PtPb/Pt nanoplates have one of the highest ORR activities to date, taking the amount of Pt used into account, and excellent durability. The team's nanoplates also showed high electrocatalytic activity and stability in oxidation reactions of methanol and ethanol.

"We believe the relatively thick and complete Pt layers play an important role in protecting the core," said Su.

To understand how the high ORR activity originates in the nanoplates, the scientists calculated the binding energy between oxygen atoms and Pt atoms on the surface. Their calculations confirmed the tensile strain on the Pt(110) surface was responsible for the enhanced ORR activity.

Eventually, the laboratory-level electrocatalysts will need to be tested in a larger fuel cell system, where real-world variables—such as pollutants that could impact surface reactivity—can be introduced.

In addition to the electron microscopy work performed at CFN, supported by DOE's Office of Science, this work involved theoretical calculations by Gang Lu's group at California State University–Northridge and synchrotron characterization by Jing-Yuan Ma at Shanghai Synchrotron Radiation Facility. This work was further supported by the National Basic Research Program of China, the National Natural Science Foundation of China, the Ministry of Science and Technology of the People's Republic of China, Soochow University, Peking University, the Young Thousand Talents Program, the Priority Academic Program Development of Jiangsu Higher Education Institutions, and the U.S. Army Research Office.