The following news release was issued by the U.S. Department of Energy's (DOE) Fermi National Accelerator Laboratory (Fermilab) on behalf of the Dark Energy Survey collaboration. Physicists from DOE’s Brookhaven National Laboratory contributed to the design and construction of this project. For more information about Brookhaven's role in this research, contact Karen McNulty Walsh, 631-344-8350, kmcnulty@bnl.gov. 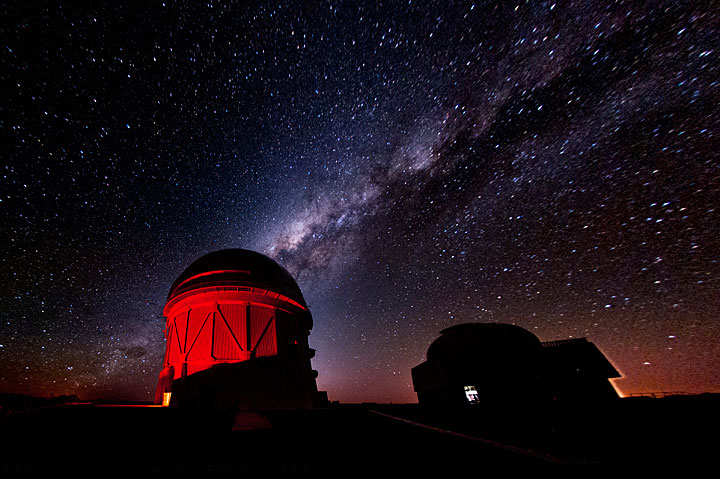 At a special session held during the American Astronomical Society meeting in Washington, D.C., scientists on the Dark Energy Survey (DES) announced today the public release of their first three years of data. This first major release of data from the Survey includes information on about 400 million astronomical objects, including distant galaxies billions of light years away as well as stars in our own galaxy.

DES scientists are using this data to learn more about dark energy, the mysterious force believed to be accelerating the expansion of the universe, and presented some of their preliminary cosmological findings in the special session. As part of that session, DES scientists also announced today the discovery of eleven new stellar streams, remnants of smaller galaxies torn apart and devoured by our Milky Way.

The public release of the first three years of DES data fulfills a commitment scientists on the survey made to share their findings with the astronomy community and the public. The data cover the full DES footprint – about 5,000 square degrees, or one eighth of the entire sky – and include roughly 40,000 exposures taken with the Dark Energy Camera. The images correspond to hundreds of terabytes of data and are being released along with catalogs of hundreds of millions of galaxies and stars.

“There are all kinds of discoveries waiting to be found in the data,” said Dark Energy Survey Data Management Project Scientist Brian Yanny of the U.S. Department of Energy’s Fermi National Accelerator Laboratory. “While DES scientists are focused on using it to learn about dark energy, we wanted to enable astronomers to explore these images in new ways, to improve our understanding of the universe.”

“The great thing about a big astronomical survey like this is that it also opens a door to many other studies, like the new stellar streams,” added Adam Bolton, Associate Director for the Community Science and Data Center at the National Optical Astronomy Observatory (NOAO). “With the DES data now available as a ‘digital sky,’ accessible to all, my hope is that these data will lead to the crowdsourcing of new and unexpected discoveries.”

The DES data can be accessed online here: https://des.ncsa.illinois.edu/releases/dr1. 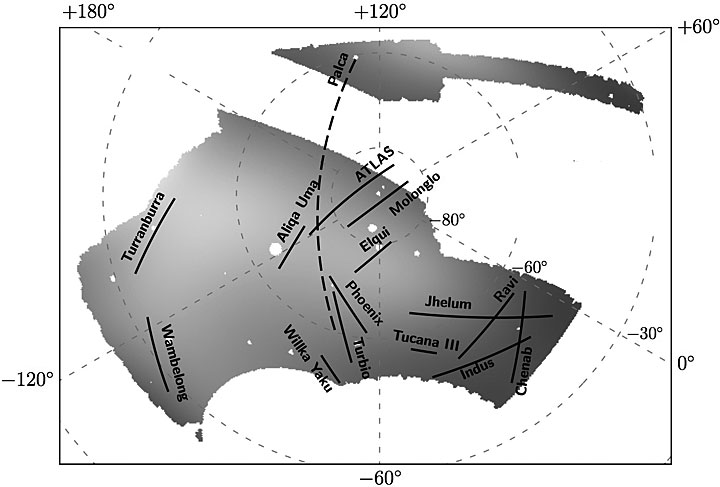 The Dark Energy Camera, the primary observation tool of the Dark Energy Survey, is one of the most powerful digital imaging devices in existence. It was built and tested at Fermilab, the lead laboratory on the Dark Energy Survey, and is mounted on the National Science Foundation’s 4-meter Blanco telescope, part of the Cerro Tololo Inter-American Observatory in Chile, a division of NOAO. The DES images are processed by a team at the National Center for Supercomputing Applications (NCSA) at the University of Illinois at Urbana-Champaign.

“We’re excited that this release of high-quality imaging data is now accessible to researchers around the world,” said Matias Carrasco Kind, DES release scientist at NCSA. “While DES was designed with the goal of understanding dark energy and dark matter, the huge amount of data in these images and catalogs will bring new scientific applications, challenges, and opportunities for discovery to astronomers and data scientists. In collaboration, NCSA, NOAO and the LIneA group in Brazil are providing the tools and resources to access and analyze this rich and robust data set.”

One new discovery enabled by the data set is the detection of eleven new streams of stars around our Milky Way. Our home galaxy is surrounded by a massive halo of dark matter, which exerts a powerful gravitational pull on smaller, nearby galaxies. The Milky Way grows by pulling in, ripping apart and absorbing these smaller systems. As stars are torn away, they form streams across the sky that can be detected using the Dark Energy Camera.  Even so, stellar streams are extremely difficult to find since they are composed of relatively few stars spread out over a large area of sky.

“It’s exciting that we found so many stellar streams,” said astrophysicist Alex Drlica-Wagner of Fermilab. “We can use these streams to measure the amount, distribution, and clumpiness of dark matter in the Milky Way. Studies of stellar streams will help constrain the fundamental properties of dark matter.”

“We’re interested in these streams because they teach us about the formation and structure of the Milky Way and its dark matter halo. Stellar streams give us a snapshot of a larger galaxy being built out of smaller ones,” said Shipp. “These discoveries are possible because DES is the widest, deepest and best-calibrated survey out there.”

Since there is no universally accepted naming convention for stellar streams, the Dark Energy Survey has reached out to schools in Chile and Australia, asking young students to select names. Students and their teachers have worked together to name the streams after aquatic words in native languages from northern Chile and aboriginal Australia. Read more about the names in this story from Symmetry: https://www.symmetrymagazine.org/article/rivers-in-the-sky. 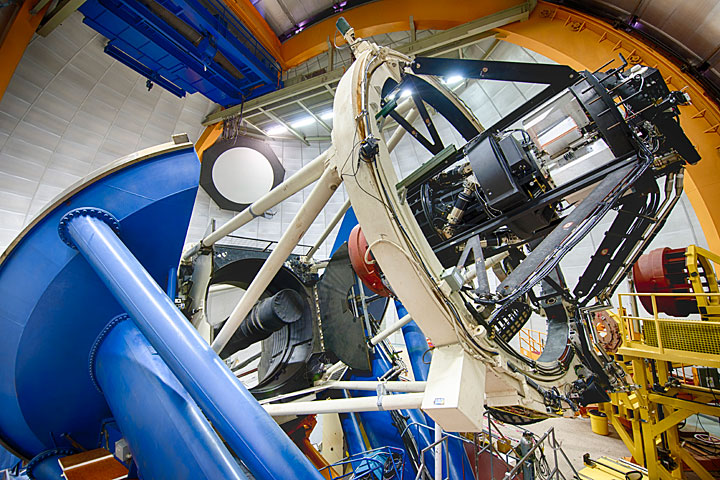 Read the papers drawn from the first years of DES data online here: https://www.darkenergysurvey.org/dr1-data-release-papers. An animation of several of the newly discovered streams can be seen here: http://home.fnal.gov/~kadrlica/movies/residual_q1_v17p2_label.gif.

DES plans one more major public data release, after the survey is completed, which will include nearly twice as many exposures as in this release.

"This result is an excellent example of how ‘data mining’ — the exploration of large data sets — leads to new discoveries,” said Richard Green, Director of the National Science Foundation’s (NSF) Division of Astronomical Sciences. "NSF is investing in this approach through our Foundation-wide `Harnessing the Data Revolution’ initiative, which is encouraging fundamental research in data science. We’re expecting a drumbeat of exciting discoveries, particularly when the Large Synoptic Survey Telescope (http://www.lsst.org) data floodgates are opened!"

This work is supported in part by the U.S. Department of Energy Office of Science.

The Dark Energy Survey is a collaboration of more than 400 scientists from 26 institutions in seven countries. Funding for the DES Projects has been provided by the U.S. Department of Energy Office of Science, U.S. National Science Foundation, Ministry of Science and Education of Spain, Science and Technology Facilities Council of the United Kingdom, Higher Education Funding Council for England, ETH Zurich for Switzerland, National Center for Supercomputing Applications at the University of Illinois at Urbana-Champaign, Kavli Institute of Cosmological Physics at the University of Chicago, Center for Cosmology and AstroParticle Physics at Ohio State University, Mitchell Institute for Fundamental Physics and Astronomy at Texas A&M University, Financiadora de Estudos e Projetos, Fundação Carlos Chagas Filho de Amparo à Pesquisa do Estado do Rio de Janeiro, Conselho Nacional de Desenvolvimento Científico e Tecnológico and Ministério da Ciência e Tecnologia, Deutsche Forschungsgemeinschaft, and the collaborating institutions in the Dark Energy Survey, the list of which can be found at www.darkenergysurvey.org/collaboration.

Cerro Tololo Inter-American Observatory, National Optical Astronomy Observatory, is operated by the Association of Universities for Research in Astronomy (AURA) under a cooperative agreement with the National Science Foundation. NSF is an independent federal agency created by Congress in 1950 to promote the progress of science. NSF supports basic research and people to create knowledge that transforms the future.

NCSA at the University of Illinois at Urbana-Champaign provides supercomputing and advanced digital resources for the nation’s science enterprise. At NCSA, University of Illinois faculty, staff, students, and collaborators from around the globe use advanced digital resources to address research grand challenges for the benefit of science and society. NCSA has been advancing one third of the Fortune 50® for more than 30 years by bringing industry, researchers, and students together to solve grand challenges at rapid speed and scale. For more information, please visit www.ncsa.illinois.edu.