The following news release was issued by the U.S. Department of Energy’s (DOE’s) Pacific Northwest National Laboratory (PNNL). Scott Giangrande and Jian Wang, scientists at DOE’s Brookhaven National Laboratory with expertise in meteorology and atmospheric aerosols, respectively, contributed to this study. For more information about Brookhaven Lab’s role in this research, see this story about the launch of the study or contact Karen McNulty Walsh, 631-344-8350, kmcnulty@bnl.gov. 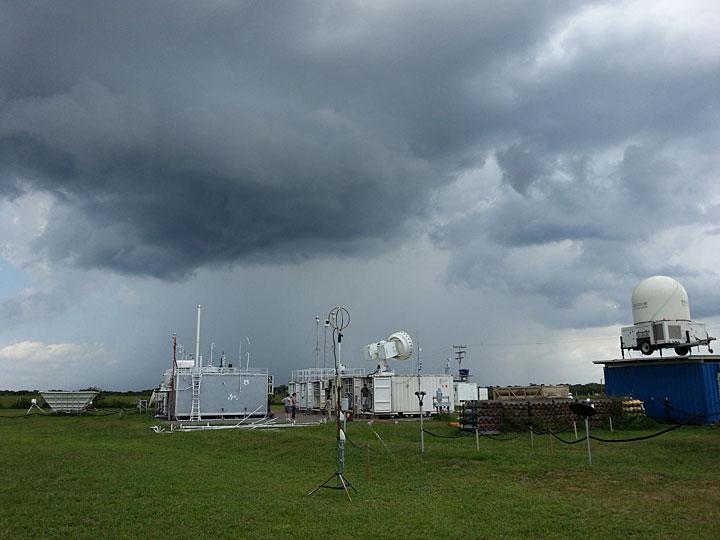 Tiny particles fuel powerful storms and influence weather much more than has been appreciated, according to a study in the Jan. 26 issue of the journal Science.

The research focuses on the power of minute airborne particles known as aerosols, which can come from urban and industrial air pollution, wildfires and other sources. While scientists have known that aerosols may play an important role in shaping weather and climate, the new study shows that the smallest of particles have an outsize effect: Particles smaller than one-thousandth the width of a human hair can cause storms to intensify, clouds to grow and more rain to fall.

The tiny pollutants – long considered too small to have much impact on droplet formation – are, in effect, diminutive downpour-makers.

“We showed that the presence of these particles is one reason why some storms become so strong and produce so much rain. In a warm and humid area where atmospheric conditions are otherwise very clean, the intrusion of very small particles can make quite an impact,” said Jiwen Fan of the Department of Energy’s Pacific Northwest National Laboratory, who is lead author of the paper in Science. Fan led 21 authors from 15 institutions around the world to do the study.

The findings are based largely on unique data made possible by the GoAmazon research campaign, where scientists made ground-based and airborne measurements related to climate during 2014-2015. The campaign was run by the Atmospheric Radiation Measurement (ARM) Climate Research Facility, a U.S. Department of Energy Office of Science user facility.

The study capitalized on data from an area of the Amazon that is pristine except for the region around Manaus, the largest city in the Amazon, with a population of more than 2 million people. The setting gave scientists the rare opportunity to look at the impact of pollution on atmospheric processes in a largely pre-industrial environment and pinpoint the effects of the particles apart from other factors such as temperature and humidity.

The findings are based largely on unique data made possible by the GoAmazon research campaign, where scientists made ground-based and airborne measurements related to climate during 2014-2015. The campaign was run by the Atmospheric Radiation Measurement (ARM) Climate Research Facility, a DOE Office of Science user facility.

In this study, scientists studied the role of ultrafine particles less than 50 nanometers wide in the development of thunderstorms. Similar but larger particles are known to play a role in feeding powerful, fast-moving updrafts of air from the land surface to the atmosphere, creating the clouds that play a central role in the formation of water droplets that fall as rain.

But scientists had not observed – until now – that smaller particles below 50 nanometers, such as particles produced by vehicles and industrial processes, could do the same. Not only that. The new study revealed that these particles, whose effects on clouds have been mostly neglected until now, can invigorate clouds in a much more powerful way than their larger counterparts.

Through detailed computer simulations, the scientists showed how the smaller particles have a powerful impact on storm clouds.

It turns out that when larger particles aren’t present high in a warm and humid environment, it spells opportunity for the smaller particles to act and form cloud droplets. The low concentration of large particles contributes to high levels of excessive water vapor, with relative humidity that can go well beyond 100 percent. That’s a key condition spurring ultrafine particles to transform into cloud droplets.

While the particles are small in size, they are large in number, and they can form many small droplets on which the excess water vapor condenses. That enhanced condensation releases more heat, and that heat makes the updrafts much more powerful: More warm air is pulled into the clouds, pulling more droplets aloft and producing more ice and snow pellets, lightning, and rain.

The result: “Invigorated convection,” as Fan says – and stronger storms. 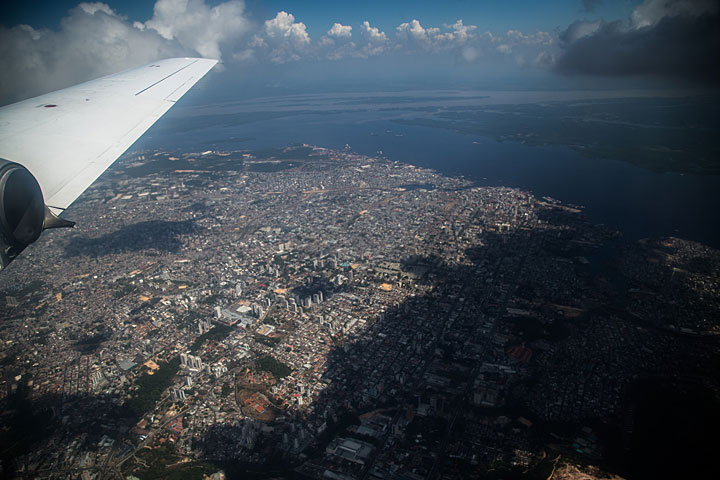 “We’ve shown that under clean and humid conditions, like those that exist over the ocean and some land in the tropics, tiny aerosols have a big impact on weather and climate and can intensify storms a great deal,” said Fan, an expert on the effects of pollution on storms and weather. “More broadly, the results suggest that from pre-industrial to the present day, human activity possibly may have changed storms in these regions in powerful ways.”

The work was supported by the Department of Energy’s Office of Science and other organizations.

Interdisciplinary teams at Pacific Northwest National Laboratory address many of America's most pressing issues in energy, the environment and national security through advances in basic and applied science. Founded in 1965, PNNL employs 4,400 staff and has an annual budget of nearly $1 billion. It is managed by Battelle for the U.S. Department of Energy's Office of Science. As the single largest supporter of basic research in the physical sciences in the United States, the Office of Science is working to address some of the most pressing challenges of our time. For more information on PNNL, visit the PNNL News Center, or follow PNNL on Facebook, Google+, Instagram, LinkedIn and Twitter.

The ARM Climate Research Facility is a DOE Office of Science user facility. The ARM Facility is operated by nine DOE national laboratories, including PNNL.