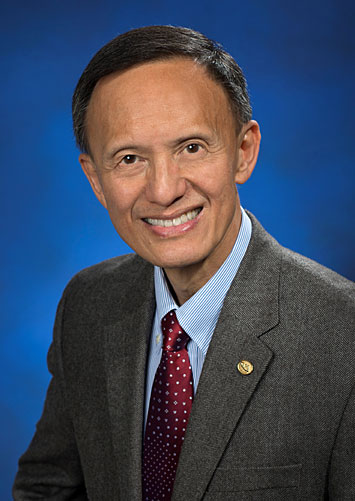 Yimei Zhu is the recipient of the Microscopy Society of America's 2018 Distinguished Scientist Award in the physical sciences category.

UPTON, NY—The Microscopy Society of America (MSA) has selected Yimei Zhu—a senior physicist and leader of the Electron Microscopy and Nanostructure Group in the Condensed Matter Physics and Materials Science Department at the U.S. Department of Energy’s (DOE) Brookhaven National Laboratory—to receive the 2018 Distinguished Scientist Award for physical sciences. This award annually recognizes two senior scientists, one in the physical sciences and the other in biological sciences, for their long-standing record of achievement in the field of microscopy and microanalysis.

“I am extremely humbled by this recognition, the highest honor of the society, and to be selected among the most distinguished scientists in the field worldwide,” said Zhu. “Four Nobel Laureates received the same award before winning the Nobel Prize: Ernst Ruska in 1985, Joachim Frank in 2003, Richard Henderson in 2005, and Jacques Dubochet in 2009. I strongly feel that my award is the result of not only my hard work, persistence, and curiosity about the inner world of matter but also my collaborations with colleagues and support from Brookhaven Lab and DOE over the past 30 years.”

Zhu led the development of an ultrafast electron diffraction system that was commissioned at Brookhaven Lab in 2012 through the Laboratory-Directed Research and Development program, which promotes exploratory, mission-supported research. With an unprecedented temporal resolution 10 orders of magnitude faster than high-speed video cameras, this system is the first of its kind in the world.

“High-speed video cameras capture consecutive images at a rate less than 1000 frames per second, which is equivalent to taking a picture once every millisecond,” explained Zhu. “Our ultrafast system operates at a rate of 100 femtoseconds, or 100 quadrillionths of a second. Using a pump-probe method in which we excite a sample with laser light (the pump) and probe it with electrons while varying the time delay between the pump and probe, we can see the otherwise unobservable motion of atoms and electrons in materials.”

This capability has opened up the possibility for scientists to understand the dynamic behavior of materials—such as the intriguing transition between insulating and   superconducting phases—and to discover “hidden” states of matter beyond the solid, liquid, gas, and plasma states that are observable in everyday life.

I strongly feel that my award is the result of not only my hard work, persistence, and curiosity about the inner world of matter but also my collaborations with colleagues and support from Brookhaven Lab and DOE over the past 30 years.

“The bottleneck in science and technology today is the lack of materials with the desired properties for applications such as energy storage and quantum computing,” said Zhu. “Overcoming these limitations requires an understanding of the complex interactions between atoms and electrons and the exotic states of matter that are far from equilibrium. Ultrafast methods such as the pump-probe approach can provide us with the dynamic information we need to control the chemical and physical properties of materials so that we can make, for example, smaller batteries with longer cycleability and computer chips with a higher memory capacity.”

In addition to advancing ultrafast instrumentation, Zhu contributed to the development of novel electron optics and detectors that can record signals from secondary electrons at unprecedented resolution. These low-energy electrons are emitted from the surface layers of a sample as the result of energy transfer from the incoming electron beam to the sample. Incorporating the new components into an electron microscope made it possible to use secondary electrons for atomic-resolution surface imaging—an idea that the scientific community long considered impossible until 2009, when Zhu and his team achieved a spatial resolution of one angstrom (the diameter of a hydrogen atom). The ability to look with such high resolution at the arrangement of surface atoms is especially important in catalysis research, in which scientists seek to identify the active sites of chemical reactions in order to improve the performance of catalysts.

Zhu’s main contributions to the field are his development and application of advanced electron microscopy methods to understand the structure and property of materials. To probe their behavior at the nanoscale, together with his students and postdocs he designed and fabricated unique sample stages enabling materials to be studied under various electric and optical stimuli and with high-frequency resonance excitation. Throughout his career, Zhu has pushed the frontier of modern electron microscopy by developing various novel techniques for characterizing materials, particularly their atomic-scale interfaces and defects. For instance, he and his team developed methods for mapping valence (outer shell) and orbital electron distributions, imaging the switching behavior of charges and spins, and accurately measuring atomic displacements and vibrations.

His work has impacted several major material areas: high-temperature superconductors, which conduct electricity with zero resistance at unusually high temperatures; functional oxides with strongly correlated electrons; ferroelectric (spontaneous electric polarization that can be reversed with an external electric field) and spin-based electronic (spintronic) systems; and energy materials such as batteries, thermoelectrics, and catalysts. In many of his experiments, he studies samples in their working environments, including in gases or liquids, and at extremely low temperatures.

Most recently, he has been collaborating with a multi-institutional team of computer scientists and theoretical physicists to study quantum materials for massively parallel computing. Materials based on the superposition principle of quantum mechanics—the ability of a system to be in multiple states at once—would significantly speed up data processing.

“It is great to learn that the MSA has awarded its highest distinction to Yimei,” said Zhu’s nominator, Eric Stach, the former leader of the Electron Microscopy Group at Brookhaven’s Center for Functional Nanomaterials (CFN)—a DOE Office of Science User Facility at Brookhaven—and currently a professor in the Department of Materials Science and Engineering at the University of Pennsylvania. “He is internationally known for developing a number of different electron microscopy and diffraction methods, most specifically for the study of condensed matter materials. Moreover, his willingness to collaborate and his genuine interest in science have led him to impact a broad range of scientific areas.”

Zhu is one of seven major award winners selected by the MSA this year. The winners represent scientists and technologists at various career stages who have made distinguished contributions to the field of microscopy and microanalysis or performed outstanding volunteer service to the society. This year’s recipients will be honored on August 6 at the MSA’s annual convention, the Microscopy and Microanalysis Meeting, in Baltimore, Maryland.

Zhu’s interest in science began at a young age. He was drawn to hands-on projects that fueled his curiosity, such as building a stereo boombox and television from small electrical components. After earning his bachelor’s degree in materials physics from Jiao Tong University in Shanghai and participating in a nationwide competition in 1982, he received a scholarship to pursue graduate study abroad—one of the first few students from mainland China to do so after the country opened its doors to the West. He continued his studies in materials physics at Nagoya University in Japan, graduating with a master’s degree in 1985 and a PhD in 1987. For a short time, he was a research associate at the University of Virginia. In 1988, he joined Brookhaven Lab as an assistant scientist and rose through the ranks to become an associate scientist (1990), tenured scientist (1997), senior scientist (2002), and group leader (1997). He is the cofounder of the CFN and founder of the Institute for Advanced Electron Microscopy, which facilitates the electron microscopy activities across Brookhaven Lab.

Zhu is the recipient of several awards, including DOE’s Chunky Bullet Award, Brookhaven Lab’s Distinguished Science and Technology Award, an R&D 100 Award, and two Microscopy Today Innovation Awards. He is an inaugural fellow and director for physical sciences of the MSA, and a fellow of the American Association for the Advancement of Science and the American Physical Society. Over his career, he has served on various government review panels, committees, institutional advisory boards, and editorial boards of microscopy journals. He is regularly called upon by DOE to share his expertise at research directional meetings and workshops on future opportunities and challenges in the field of electron microscopy. To date, he has published more than 500 peer-reviewed scientific journal articles, presented more than 300 invited talks, and holds many patents. In addition to his positions at Brookhaven Lab, Zhu is an adjunct professor at Columbia and Stony Brook Universities.

The Microscopy Society of America is an affiliate society of the American Institute of Physics and the American Association for the Advancement of Science.