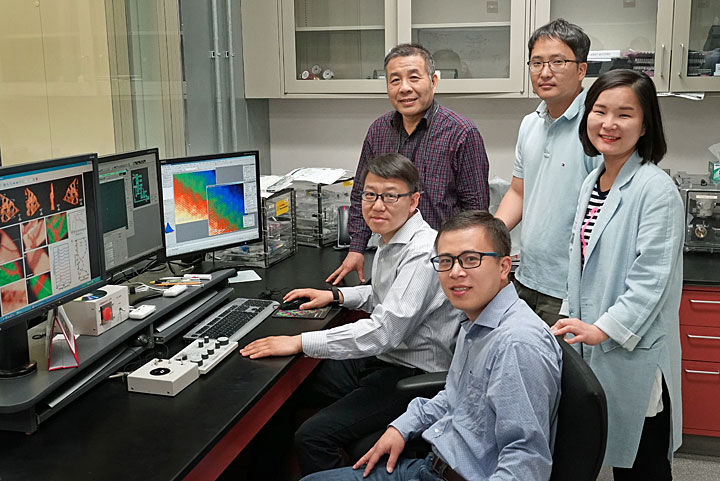 As the demand for smartphones, electric vehicles, and renewable energy continues to rise, scientists are searching for ways to improve lithium-ion batteries—the most common type of battery found in home electronics and a promising solution for grid-scale energy storage. Increasing the energy density of lithium-ion batteries could facilitate the development of advanced technologies with long-lasting batteries, as well as the widespread use of wind and solar energy. Now, researchers have made significant progress toward achieving that goal.

A collaboration led by scientists at the University of Maryland (UMD), the U.S. Department of Energy’s (DOE) Brookhaven National Laboratory, and the U.S. Army Research Lab have developed and studied a new cathode material that could triple the energy density of lithium-ion battery electrodes. Their research was published on June 13 in Nature Communications.

Substituting the cathode material with oxygen and cobalt prevents lithium from breaking chemical bonds and preserves the material's structure.

Scientists at UMD synthesized a new cathode material, a modified and engineered form of iron trifluoride (FeF3), which is composed of cost-effective and environmentally benign elements—iron and fluorine. Researchers have been interested in using chemical compounds like FeF3 in lithium-ion batteries because they offer inherently higher capacities than traditional cathode materials.

“The materials normally used in lithium-ion batteries are based on intercalation chemistry,” said Enyuan Hu, a chemist at Brookhaven and one of the lead authors of the paper. “This type of chemical reaction is very efficient; however, it only transfers a single electron, so the cathode capacity is limited. Some compounds like FeF3 are capable of transferring multiple electrons through a more complex reaction mechanism, called a conversion reaction.” 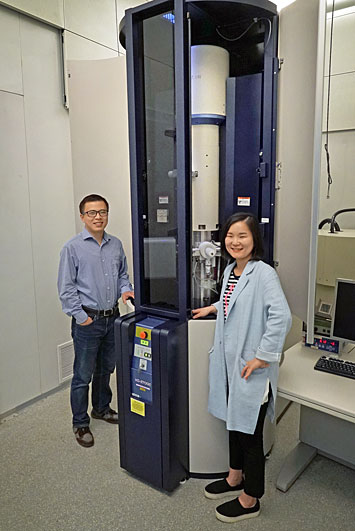 Brookhaven scientists Enyuan Hu and Sooyeon Hwang are pictured at the Center for Functional Nanomaterial's TEM facility where the researchers viewed the cathode material at a resolution of 0.1 nanometers.

Despite FeF3’s potential to increase cathode capacity, the compound has not historically worked well in lithium-ion batteries due to three complications with its conversion reaction: poor energy efficiency (hysteresis), a slow reaction rate, and side reactions that can cause poor cycling life. To overcome these challenges, the scientists added cobalt and oxygen atoms to FeF3 nanorods through a process called chemical substitution. This allowed the scientists to manipulate the reaction pathway and make it more “reversible.”

“When lithium ions are inserted into FeF3, the material is converted to iron and lithium fluoride,” said Sooyeon Hwang, a co-author of the paper and a scientist at Brookhaven’s Center for Functional Nanomaterials (CFN). “However, the reaction is not fully reversible. After substituting with cobalt and oxygen, the main framework of the cathode material is better maintained and the reaction becomes more reversible.”

First at CFN, the researchers used a powerful beam of electrons to look at the FeF3 nanorods at a resolution of 0.1 nanometers—a technique called transmission electron microscopy (TEM). The TEM experiment enabled the researchers to determine the exact size of the nanoparticles in the cathode structure and analyze how the structure changed between different phases of the charge-discharge process. They saw a faster reaction speed for the substituted nanorods.

“TEM is a powerful tool for characterizing materials at very small length scales, and it is also able to investigate the reaction process in real time,” said Dong Su, a scientist at CFN and a co-corresponding author of the study. “However, we can only see a very limited area of the sample using TEM. We needed to rely on the synchrotron techniques at NSLS-II to understand how the whole battery functions.”

At NSLS-II’s X-ray Powder Diffraction (XPD) beamline, scientists directed ultra-bright x-rays through the cathode material. By analyzing how the light scattered, the scientists could “see” additional information about the material’s structure.

“At XPD, we conducted pair distribution function (PDF) measurements, which are capable of detecting local iron orderings over a large volume,” said Jianming Bai, a co-author of the paper and a scientist at NSLS-II. “The PDF analysis on the discharged cathodes clearly revealed that the chemical substitution promotes electrochemical reversibility.”

Combining highly advanced imaging and microscopy techniques at CFN and NSLS-II was a critical step for assessing the functionality of the cathode material.

“We also performed advanced computational approaches based on density functional theory to decipher the reaction mechanism at an atomic scale,” said Xiao Ji, a scientist at UMD and co-author of the paper. “This approach revealed that chemical substitution shifted the reaction to a highly reversible state by reducing the particle size of iron and stabilizing the rocksalt phase.”Scientists at UMD say this research strategy could be applied to other high energy conversion materials, and future studies may use the approach to improve other battery systems.