UPTON, NY—The American Association for the Advancement of Science (AAAS) has recognized two staff members from the U.S. Department of Energy’s Brookhaven National Laboratory with the distinction of Fellow. Battery researcher Esther Sans Takeuchi and science communicator Karen McNulty Walsh are among the 416 AAAS members elevated this year to the rank of Fellow by their peers—a tradition that began in 1874 to recognize members for their scientifically or socially distinguished efforts to advance science or its applications. 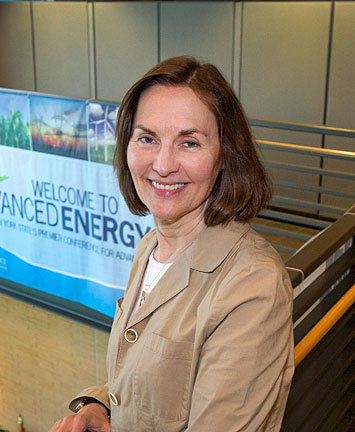 Takeuchi is Chief Scientist in the Lab’s Energy & Photon Sciences Directorate, Stony Brook University’s (SBU) William and Jane Knapp Chair in Energy and the Environment, and a Distinguished Professor of Chemistry in the College of Arts & Sciences and in Materials Science and Chemical Engineering in the College of Engineering and Applied Sciences at SBU.

As part of the Section on Industrial Science and Technology, Takeuchi was elected as a Fellow of AAAS for her “distinguished contributions in the area of lithium battery research with implantable applications, which have enabled the creation of several life-saving inventions.”

"The AAAS is a highly respected organization and I am very honored to be elected as an AAAS Fellow," said Takeuchi. " “It is gratifying that my research in energy storage is being so honored as it remains an important field of inquiry.”

Takeuchi invented the compact batteries that power most implantable cardiac defibrillators (ICDs). Used by millions of patients, ICDs greatly reduce incidence of heart attack by delivering life-saving shocks. Her design extended battery life significantly and reduced the frequency of battery replacement surgeries for patients already at risk due to heart problems. The lithium/silver vanadium oxide battery is just one of Takeuchi’s 150 U.S. patents, making her one of the country’s most prolific women inventors. She  also holds 39 European patents.

The daughter of Latvian emigrants, Takeuchi credits her parents for instilling in her a strong work ethic from a young age and for awakening her interest in science. Today, she is recognized as one of the world’s leading energy storage researchers.

With experience in industry and academia, she continues to work at the forefront of battery technology innovation at Brookhaven and SBU.  Among the tools Takeuchi uses to advance battery research is the National Synchrotron Light Source II, a DOE Office of Science user facility at Brookhaven National Laboratory.

Takeuchi is a member of the US National Academy of Engineering and was awarded the prestigious National Medal of Technology and Innovation in 2010 by President Obama. Earlier this year, she also won the 2018 European Inventor Award, Europe’s most prestigious prize of innovation. 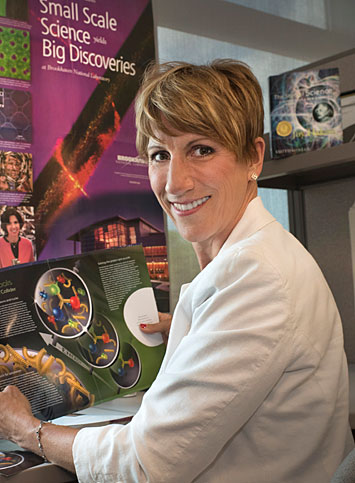 McNulty Walsh, a science writer in Brookhaven Lab’s Media & Communications Office, was elected as a AAAS Fellow for her "distinguished contributions to science communication and public understanding of science, particularly for describing and translating technical research for the media and the public." She was elected as part of the AAAS Section on General Interest in Science and Engineering.

"I’m extremely honored to be elected as a Fellow of AAAS for my efforts to convey the exciting advances of scientific research and the importance and relevance of science in our lives," said McNulty Walsh. “Throughout my career, and particularly at Brookhaven Lab—home to some of the most advanced scientific tools and most brilliant minds in the world—my goal has been to captivate and inspire others by highlighting not just the big successes, but also the process of discovery. I am fortunate to work alongside so many dedicated people who give me great stories to share."

McNulty Walsh joined Brookhaven Lab nearly 20 years ago as a principal media & communications specialist. Her role involves translating the often-complex but compelling science done at Brookhaven and communicating its benefit to society for a variety of audiences, including the science-interested public, media, policymakers, and elected officials, among others.

She accomplishes this by writing press releases, feature articles, and other content to convey the impact of research across a wide range of sciences, from biology to nuclear physics; interviewing scientists and translating complex concepts into accessible language; pitching stories to external media and coordinating coverage; and assisting Laboratory managers and scientists with strategic outreach. McNulty Walsh also works to educate and inspire the next generation of science communicators through an annual science communication workshop for hundreds of on-site undergraduate and graduate student research interns, and by mentoring multiple science-writing interns each year.

Her writing is often cited by DOE for its effectiveness in telling the story of Brookhaven and the other national labs, and she has served as an expert panelist for science communication best practice discussions across the DOE complex.  She has also helped organize several successful AAAS symposia on topics including addiction, nuclear physics, and energy research.

McNulty Walsh earned her bachelor’s degree in biology at Vassar College, and a master’s degree in journalism from New York University’s Science, Health & Environmental Reporting Program. During the 10 years before coming to Brookhaven in 1999, she wrote science stories for children’s publications, and served as editor of Science World magazine (Scholastic) and Zillions magazine (Consumers Union).

McNulty Walsh is a member of National Association of Science Writers and AAAS. She has won multiple awards for her work, including the 2016 Brookhaven Award in recognition of performance and achievements that represent outstanding service to Brookhaven National Laboratory, and a series of “EdPress” Distinguished Achievement Awards, 1991-1998, for excellence in educational journalism.

Fellows will be presented with an official certificate and rosette pin on Feb. 16, 2019 at the AAAS Fellows Forum during the 2019 AAAS Annual Meeting in Washington, D.C.

The American Association for the Advancement of Science (AAAS) is the world’s largest general scientific society and publisher of the journal Science (www.sciencemag.org) as well as Science Translational Medicine, Science Signaling, a digital, open-access journal, Science Advances, Science Immunology, and Science Robotics. AAAS was founded in 1848 and includes nearly 250 affiliated societies and academies of science, serving 10 million individuals. Science has the largest paid circulation of any peer-reviewed general science journal in the world. The non-profit AAAS (www.aaas.org) is open to all and fulfills its mission to “advance science and serve society” through initiatives in science policy, international programs, science education, public engagement, and more. For the latest research news, log onto EurekAlert! (www.eurekalert.org), the premier science-news Web site, a service of AAAS.