Part of the team involved in the cloud mapping campaign in front of the aircraft, the CIRPAS Twin Otter. Andy Vogelmann is in the center, wearing blue shirt and jacket.

Coordinated with the AAF, flights were conducted out of the Guthrie and Ponca City airports. Team members aboard a CIRPAS Twin Otter logged 59 flights and 259 research hours between January and June above the ARM Climate Research Facility’s Southern Great Plains site in Oklahoma. During most of June, the National Aeronautics and Space Administration (NASA) King Air B200 also flew above the Twin Otter to obtain complementary measurements of aerosol and cloud microphysical properties.

Boundary-layer clouds are very important to understanding climate variations and climate change, but are often poorly simulated in climate models. The field program measured cloud properties like water content and water droplet size, which determine the amount of light that is transmitted or reflected by the cloud, a key component in modeling the earth's climate. The team expects to build a statistical picture of these cloud fields that will be used to improve their representation in climate models.

“This long-term campaign enabled sampling of a sweeping variety of low-level cloud conditions, which was precisely the goal of the program,” said Vogelmann. “Over the months, we encountered stratus, cumulus, and finally cumulus towers as the summer months started to heat up. Comprehensive aircraft measurements were made of the clouds’ microphysical properties, radiative fields, aerosol properties, and atmospheric state.” 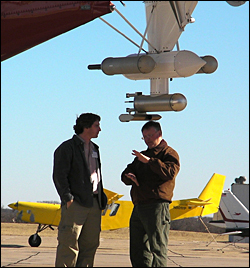 According to Vogelmann, this statistical picture for different cloud states will help improve the scientists’ understanding of the physical processes that operate within these clouds and control where they occur and how long they live so that their representations can be improved in climate models. He added, “These data will also be used to improve methods that remotely observe cloud properties from surface radiometers and satellites, which are essential for obtaining the type of long-term observations needed for cloud and climate studies.”

For example, a recent experiment led by BNL’s Dong Huang is one such method. To scan a large area in a short time, Huang’s team used a novel “cloud tomography” approach to reconstruct three-dimensional cloud structure, using multiple microwave sensors to scan clouds from several distinct ground locations. The interior structure can then be inferred from the resultant radiometric measurements using sophisticated algorithms.

The RACORO campaign was an experiment in itself, in terms of conducting extended operations of this kind in unpredictable weather. For example, between January and March it was unusually dry and several degrees warmer than average, with 20 to 40 percent of average precipitation and drought throughout much of the southern United States. The lack of moisture resulted in fewer cloudy days than expected at the start of the operation, but conditions transitioned to more spring moisture and the flight hours ramped up significantly in April and May. In fact, the conditions in May resulted in some of the best cloud cases of the period.

“There is no way we could have pulled off this long of a campaign without a lot of people stepping up to the plate,” said Vogelmann. “This includes the steering committee and especially the people at the site: the aerial facility and the Twin Otter teams.”

“The skill and dedication of our forecasters was also outstanding,” said Vogelmann. “They live in the area, so in addition to what the forecast models show, they provided local insight to the science team based on their personal experiences with the weather. We relied on our forecasters to provide an integrated view from the different models, particularly in the tricky storm season when subsequent forecast model runs could be very dissimilar and storms could develop rapidly—conditions we certainly wanted to avoid putting our pilots into,” explained Vogelmann.

Using surface sensors, the ARM Climate Research Facility has been collecting cloud data for 17 years at its Southern Great Plains site near Lamont, Oklahoma. This site was chosen for the RACORO campaign because there is a wide range of cloud types, including low-level thin clouds that were the focus of the project, and ARM’s state-of-the-art surface sensors for remotely observing cloud properties.

Details about the campaign’s scientific objectives, measurements, and operations are available at the RACORO website (http://acrf-campaign.arm.gov/racoro/). A connection with the Discovery Channel also led to a blog about the campaign during its last month of flight operations in June. Available on the EarthLive website, the Skinny on Thin Clouds blog includes additional insights into daily life during an aircraft field campaign.