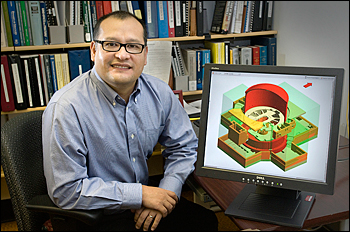 Manuel Miranda joined Brookhaven Lab as an assistant scientist on June 22, 2009, and now, after settling in to his new responsibilities, he is very happy with his decision to join a team of “high-caliber colleagues” in the Energy Sciences & Technology Department’s Engineering Mechanics and Infrastructure Group.

After he earned his Ph.D. from Columbia University, Miranda was interested in working in a research environment. Also, he and his wife, who recently became new parents, wanted to stay in the Northeast. BNL was an excellent fit for him.

In his new position at BNL, Miranda reviews the safety of designs for proposed new nuclear power plants. Currently, he is reviewing design safety for the Evolutionary Power Reactor, a pressurized water reactor that is the latest generation nuclear power plant design, to make sure that it meets all Nuclear Regulatory Commission (NRC) regulations.

“The big challenge of my job right now is to get up to speed on learning NRC regulations,” said Miranda.

According to Miranda, the best part of his new job is his team of colleagues, very knowledgeable professionals who readily share their expertise with him. He also enjoys the “laid-back, campus environment” at BNL.

Born and raised in Peru, Miranda earned a diploma in civil engineering from Pontificia Universidad Católica del Perú in 1998. He then came to the U.S. and worked as a research assistant at Stanford University in 1999, and earned his M.S. in structural engineering from the university in 2000.

Miranda then became an engineer at ABS Consulting, Inc., in Oakland, California, in 2000, but left the company in 2004 to earn a Ph.D. in engineering mechanics from Columbia University. During that time he worked as a research assistant at Columbia, and, for several months in 2008, as a project director at Thornton Tomasetti, Inc., in Manhattan, but left that firm to complete his Ph.D. thesis. He earned his doctoral degree in 2009, and shortly afterward joined Brookhaven.