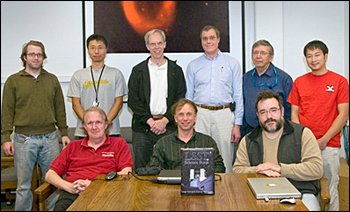 Several members of the BNL Journal Club, who meet weekly to discuss astronomy and astrophysics relevant to the Large Synopic Survey Telescope Science Collaborations are (back, from left) Erin Sheldon, Zhaoming Ma, John Haggerty, Tom Throwe, Jim Frank, and Mickey Chiu, all of the Physics Department; (seated, from left) Waldo MacKay and Michael Sivertz, both of the Collider-Accelerator Department; and visitor Paul Stankus of Oak Ridge National Laboratory. Unable to be present were members from the Instrumentation Division: Paul O’Connor, Ivan Kotov, and Peter Takacs.

A very special book, The Large Synoptic Survey Telescope Science Book, was published on October 16. It describes the design planning and science goals of a very special instrument, the Large Synoptic Survey Telescope (LSST), to be constructed high on a mountaintop north of Santiago, Chile. With an extremely large, nearly 10-square-degree field of view, and only 15 seconds needed per exposure, the LSST will be able to record images of the entire sky every three days.

Michael Sivertz of the Collider-Accelerator Department (C-AD) is one of the editors of the LSST Science Book and a contributing author of the “System Design” chapter. The book, which can boast 243 contributing authors from 95 institutions spread across 16 countries, outlines the most exciting prospects for discovery that an instrument like the LSST makes possible.

“With this publication, the LSST takes one step closer to the realization of a decades-long dream of many scientists and astronomers: making a movie of the stars,” said Sivertz. “Over the ten-year observing program, the combination of wide-deep-fast viewing will give us approximately 1,000 images of every star through six different color filters. We’ll be making a color movie where every star gets to be a ‘Star.’”

The October publication of the LSST Science Book is the second edition: Version 1.0 was released as part of the LSST presentation to the Astro2010 Decadal Survey committee, June 7-11, 2009, in Pasadena, CA. After that meeting, a panel of experts makes recommendations for the future of research in astronomy. The Science Book will be used in preparation for the LSST Preliminary Design Review to be conducted by the National Science Foundation in 2010, after the findings of the Decadal Survey are released.

BNL is contributing to the LSST project through the sensor development (July 24, 2009 Bulletin and this story) undertaken by the Instrumentation Division, which is experimenting with a new generation of imaging sensors having greater sensitivity, better resolution, and faster readout time than those used in today’s astronomical cameras.

Also, a team in the Physics Department is involved in the LSST scientific research plans through sensor development, calculations and simulations.

Said Physics Chair Tom Ludlam, “The focus of Brookhaven’s astrophysics initiative is the phenomenon of dark energy: the unknown force that causes our universe to expand at an accelerating rate. This recent discovery is absolutely fundamental to the evolution and structure of the universe, and its study requires the most powerful astronomical measurements ever undertaken. Brookhaven has a long history of basic research in the fundamental forces of nature using ‘big science’ facilities. Our participation in LSST continues this tradition, not only in scientific leadership, but also in the cutting edge instrumentation and computing capabilities that characterize a forefront national laboratory.”

The LSST has inspired great interest at BNL at least since February 2006, when John Haggerty of the Physics Department started a Journal Club that included members of Physics, C-AD, and Instrumentation. The club has been meeting weekly to cover the latest developments in astronomy and astrophysics relevant to the LSST Science Collaborations.

Immensity of Data To Be Mined

“One of the unusual aspects of the LSST is the number of particle physicists participating in the project,” said Sivertz. “In its scope and size, the project rivals accelerators like the Relativistic Heavy Ion Collider [RHIC]. The staggeringly large data volume is comparable to that dealt with by the STAR and PHENIX detectors in analysis of the RHIC data.

“Astronomers are making use of tools like large-scale simulations that have been commonplace in particle physics for decades,” he said. “Particle physicists are finding no more effective way of studying the elusive dark matter and dark energy than by looking through a telescope.”

Sivertz explained that the LSST Science Book contains 11 chapters on topics ranging from cataloging the potentially harmful near-Earth asteroids to using gravitational lensing to map out the distribution of dark matter across the universe.

“Each night of observing, the LSST will discover hundreds of supernovae, a sample comparable to the total number of supernova known to date,” he said. “The catalog of over 3 billion galaxies will enable studies of the equation of state of the universe, casting light on the nature of dark energy.”

Other chapters describe how the demands of the science constrain the design of the telescope itself, from the mirror sizes to the choice of sensor used for the camera.

Throughout the book, and in a chapter dedicated to public outreach, projects that involve public participation are described, similar to the popular Galaxy Zoo project on the web that encourages hundreds of thousands of volunteer amateurs to classify galaxies and more recently to find supernovae.

LSST is scheduled for “first light” in 2014 with science operations beginning in 2015. Said Sivertz, “The LSST Science Book will serve as a guide post during the design and construction phase and continue to be a useful reference throughout the 10-year life of the project.”