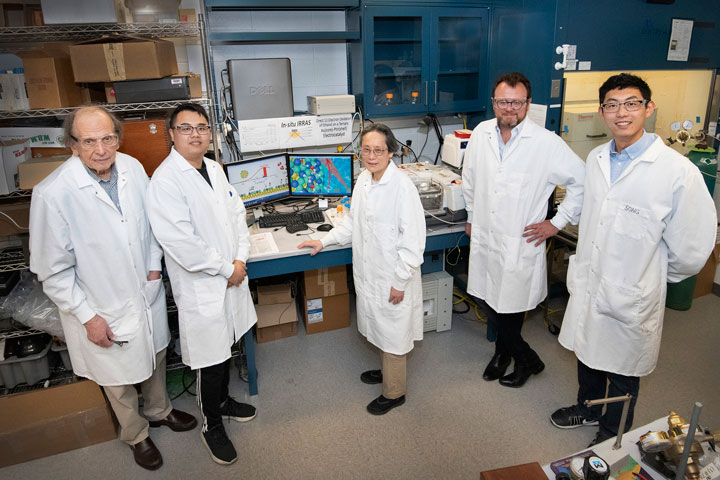 UPTON, NY—Scientists at the U.S. Department of Energy’s (DOE) Brookhaven National Laboratory and the University of Arkansas have developed a highly efficient catalyst for extracting electrical energy from ethanol, an easy-to-store liquid fuel that can be generated from renewable resources. The catalyst, described in the Journal of the American Chemical Society, steers the electro-oxidation of ethanol down an ideal chemical pathway that releases the liquid fuel’s full potential of stored energy.

“This catalyst is a game changer that will enable the use of ethanol fuel cells as a promising high-energy-density source of ‘off-the-grid’ electrical power,” said Jia Wang, the Brookhaven Lab chemist who led the work. One particularly promising application: liquid fuel-cell-powered drones. 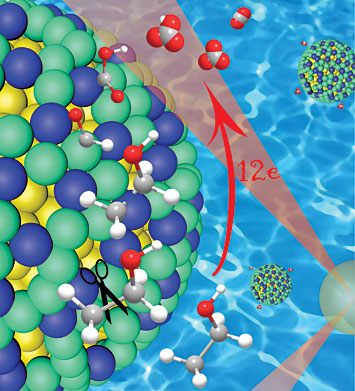 A close-up of the platinum/iridium (green/blue) shell over a gold nanoparticle core (yellow), showing how this catalyst cleaves the carbon-carbon (gray) bonds in ethanol while initially leaving hydrogen atoms attached. The hydrogen protects the carbon in the early stages of the reaction, preventing the formation of catalyst-poisoning carbon monoxide, which enables complete oxidation and the release of 12 electrons.

Much of ethanol’s potential power is locked up in the carbon-carbon bonds that form the backbone of the molecule. The catalyst developed by Wang’s group reveals that breaking those bonds at the right time is the key to unlocking that stored energy.

“Electro-oxidation of ethanol can produce 12 electrons per molecule,” Wang said. “But the reaction can progress by following many different pathways.”

Most of these pathways result in incomplete oxidation: The catalysts leave carbon-carbon bonds intact, releasing fewer electrons. They also strip off hydrogen atoms early in the process, exposing carbon atoms to the formation of carbon monoxide, which “poisons” the catalysts’ ability to function over time.

“The 12-electron full oxidation of ethanol requires breaking the carbon-carbon bond at the beginning of the process, while hydrogen atoms are still attached, because the hydrogen protects the carbon and prevents the formation of carbon monoxide,” Wang said. Then, multiple steps of dehydrogenation and oxidation are needed to complete the process.

The new catalyst—which combines reactive elements in a unique core-shell structure that Brookhaven scientists have been exploring for a range of catalytic reactions—speeds up all of these steps. 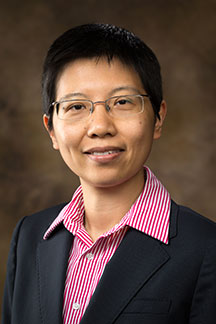 Jingyi Chen (Credit: U. of Arkansas)

To make the catalyst, Jingyi Chen of the University of Arkansas, who was a visiting scientist at Brookhaven during part of this project, developed a synthesis method to co-deposit platinum and iridium on gold nanoparticles. The platinum and iridium form “monoatomic islands” across the surface of the gold nanoparticles. That arrangement, Chen noted, is the key that accounts for the catalyst’s outstanding performance.

“The gold nanoparticle cores induce tensile strain in the platinum-iridium monoatomic islands, which increases those elements’ ability to cleave the carbon-carbon bonds, and then strip away its hydrogen atoms,” she said.

Zhixiu Liang, a Stony Brook University graduate student and the first author of the paper, performed studies in Wang’s lab to understand how the catalyst achieves its record-high energy conversion efficiency. He used “in situ infrared reflection-absorption spectroscopy” to identify the reaction intermediates and products, comparing those produced by the new catalyst with reactions using a gold-core/platinum-shell catalyst and also a platinum-iridium alloy catalyst.

“By measuring the spectra produced when the infrared light is absorbed at different steps in the reaction, this method allows us to track, at each step, what species have been formed and how much of each product,” Liang said. “The spectra revealed that the new catalyst steers ethanol toward the 12-electron full oxidation pathway, releasing the fuel’s full potential of stored energy.”

The next step, Wang noted, is to engineer devices that incorporate the new catalyst.

The mechanistic details revealed by this study may also help guide the rational design of future multicomponent catalysts for other applications.

This work was funded by the U.S. Department of Energy’s Office of Science and the National Science Foundation.