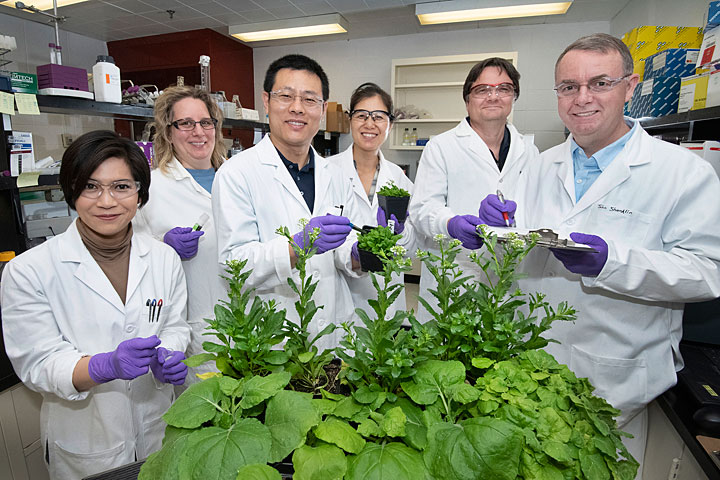 UPTON, NY—Scientists studying plant biochemistry at the U.S. Department of Energy’s Brookhaven National Laboratory recently made a surprising discovery: They found that a protein that turns on oil synthesis also activates a protein that puts the brakes on the same process. In a paper just published in the journal Plant Physiology, they describe how this seemingly paradoxical system keeps oil precursors perfectly balanced to meet plants’ needs.

“We were initially surprised by our discovery that the signaling protein that turns on the oil synthesis pathway also turns on the off switch,” said Brookhaven Lab biochemist John Shanklin, who led the research.

It's like giving a faster car the bigger brakes it would need to stop if a deer runs into the road.

But after further investigation it made perfect sense. Fatty acids—the precursors to oils—can be toxic if allowed to accumulate. If the levels increase beyond the cell’s requirements for making lipid components of membranes or oils, the cells need a way to shut production off.

The key is that the off switch, a protein known as BADC, is a “conditional inhibitor,” Shanklin said. It only puts on the brakes when the level of free fatty acids is high.

This work could advance the team’s efforts to find new ways to control oil production in plants with the goal of making fuels or other useful products.

Putting the pieces together

The new study builds on previous work by Shanklin’s group. One of those studies revealed that BADC exerts its braking mechanism by inserting itself into a key enzyme involved in making fatty acids, ACCase.

“We were interested to learn more about the BADC proteins, and how the genes for these proteins were regulated,” Shanklin said. 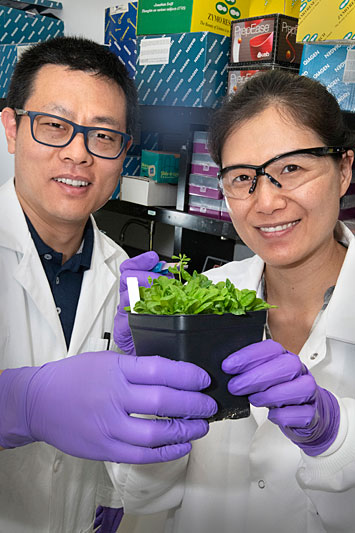 The study's lead authors, Zhiyang Zhai and Hui Liu, with an Arabidopsis plant

In another study, the team had explored details of the signaling protein known as WRINKLED1, which turns on the enzymes for fatty acid synthesis, including parts of ACCase, and therefore serves as the on switch for the oil-synthesis pathway.

The scientists had little reason to suspect a direct connection between WRI1 (the on switch) and BADC (the off switch) until the lead authors, Hui Liu and Zhiyang Zhai, observed that plants with mutations in genes for either protein had unusually short roots.

“It would have been easy to overlook this connection as a coincidence, but Liu and Zhai’s observation turned out to be central to the mechanism we discovered,” Shanklin said.

Further investigation showed that the aberrant hormone levels seen in WRI1 mutant roots were like those found in roots of the BADC mutant. Closer biochemical-genetic investigations led the team to conclude that both proteins were indeed linked to this growth defect—which triggered them to explore the connection further.

Working with Brookhaven colleague Jorg Schwender, they showed that the WRI1 on switch bound tightly to the BADC gene, enabling it to be turned on. They confirmed the connection by showing that adding more BADC to the WRI1 mutant made the roots grow longer.

The key point is that having the on switch turn on genes for the off switch doesn’t necessarily turn fatty acid synthesis off. It just gives the cell a way to turn synthesis off if fatty acid levels get too high. And the more WRI1 ramps up fatty acid production, the more the cell also needs to ramp up BADC to be able to stop that process.

“It’s like giving a faster car the bigger brakes it would need to stop if a deer runs into the road,” Shanklin said.

“Making lots of membranes or oil will keep fatty acid levels low, and the BADC braking system won’t be needed,” Shanklin explained. “It’s only when production exceeds demand and fatty acids build up that the brakes need to be applied.”

The scientists are now conducting further biochemical studies to explore how elevated free fatty acids trigger BADC to become inserted into ACCase to put the brakes on.