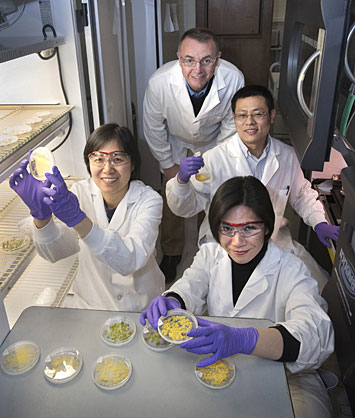 UPTON, NY—Scientists studying plant biochemistry at the U.S. Department of Energy’s Brookhaven National Laboratory have discovered new details about biomolecules that put the brakes on oil production. The findings suggest that disabling these biomolecular brakes could push oil production into high gear—a possible pathway toward generating abundant biofuels and plant-derived bioproducts. The study appears in in the journal Plant Physiology.

“It’s normal for plant cells to down-regulate oil production when we feed them excess fatty acids, and this study confirms our hypothesis about how they do that. But we also discovered that the brakes on oil production are partially on even under normal conditions, which was a big surprise,” said Brookhaven Lab biochemist John Shanklin, who led the research.

“It would be like driving a car for several years and finding out one day that a parking brake you didn’t know about had been on all along. When you remove that brake, the car has much more power; that’s what we’ve just discovered for plant oil production,” he said.

The biomolecule central to this study is the enzyme that determines the rate of oil production. That enzyme, known as ACCase, is a protein made of four subunits, all of which are necessary for the enzyme to function. With all four subunits in place, the enzyme drives the first step in the synthesis of fatty acids, key components of oils.

Earlier work by Shanklin’s group in 2012 revealed that when plant cells were fed a short-term excess of fatty acids (lasting less than two days), a feedback loop inhibited this enzyme, so oil production would slow down. As long as fatty acid concentrations dropped within two days, the enzyme and oil production would turn back on. But a longer-term excess of fatty acids would permanently disable the enzyme. At the time, scientists knew of several ways that the enzyme could be inhibited, but none of those ways could explain the irreversible inhibition they were observing.

We discovered that the brakes on oil production are partially on even under normal conditions, which was a big surprise.

Team member Hui Liu obtained plants in which the genes that code for the inactive subunits were individually disabled. She used those variants to breed plants that had combinations of disabled subunits. If Shanklin’s idea was correct, cells with disabled inactive subunits would have a lower capacity to turn the enzyme off.

“We suspected that disabling the genes would turn off the off-switch for oil production, allowing the plant cells to make more oil,” Shanklin explained.

When team member Jan Keereetaweep tested this idea by feeding the plant cells excess fatty acids, that’s exactly what happened: Cells with combinations of the disabled genes didn’t turn off oil production the way cells with the normal genes did.

“There was 50 percent less inhibition of oil production in the cells with disabled genes compared to the wild-type plant cells,” Shanklin said. That result confirmed that the inactive subunit coded for by the normal genes in the wild-type plants was indeed what triggered permanent shutdown of the enzyme.

“This project was an excellent collaboration among Keereetaweep, Liu, and Zhiyang Zhai to answer some basic scientific questions about plant metabolism,” Shanklin noted. “Now, the knowledge they generated can potentially underpin strategies to increase oil accumulation in plant species grown for applications such as biofuels or bioproducts.”

This research was funded by the DOE Office of Science and the National Science Foundation.