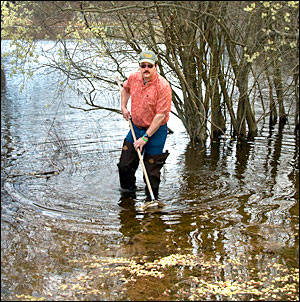 “The state needs to know about the health of the tiger salamander population because it’s an endangered species,” said Green. “We already have a good baseline where they should be breeding, but now we want to know if the ponds are still active breeding sites that are producing tiger salamanders.”

The grayish-black salamanders, which are dotted with yellowish spots, are abundant throughout the United States. However, they’ve slowly lost their habitat around New York State, making them an endangered species locally.

Long Island is the only region within New York where tiger salamanders can be found and is home to about 120 ponds in which their activity has been documented. Dozens of ponds are scattered throughout Brookhaven Lab’s 5,265 acres of land and 26 are home to tiger salamanders. 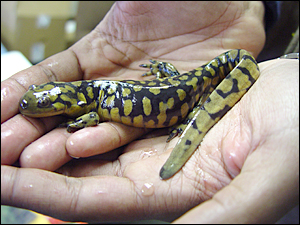 BNL protects these amphibians by tracking which ponds they inhabit and restricting new construction projects within 1,000 feet of their residence during the breeding season, which begins around December 1 and ends near April 15.

To monitor the ponds, Green searches for softball-sized gelatinous egg masses that encase between 20 and 50 tiny blacks dots of salamander larvae. These masses are hidden about three inches below the water’s murky surface, making the translucent balls difficult to spot.

Green’s exploration of the first two ponds this year showed promising signs of salamander activity. He found both tightly wound goo-balls dotted with tiny black spots of larvae — indicating the eggs were less than 2 weeks old — and loosened gobs of goo containing comma-shaped larvae, which were likely older than 2 weeks.

“This outing was a success. We found 14 masses in the first pond and one in the second pond,” said Green. “Some ponds are more successful than others, but we simply want to know whether the population is still active in the pond or is it declining, and if so, what needs to be done.”

The larvae will eventually emerge from their mucus-like sheaths, swimming around the ponds filter feeding until they grow into carnivorous bug-consuming creatures. During July and August, young salamanders crawl out of the ponds as they mature and will grow up to eight inches, on average, in adulthood.

Green and his colleagues at the Environmental Protection Division will continue to probe additional ponds for salamander egg masses over the next few weeks to monitor the salamander’s activity; they try to check each pond once a year.