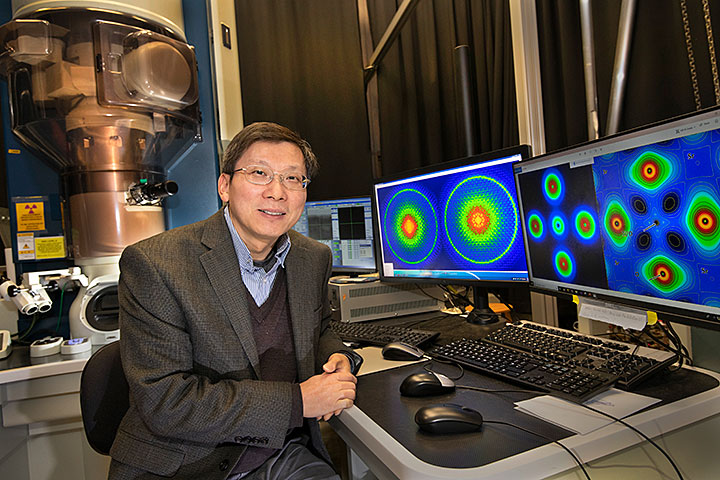 Lijun Wu in an electron microscopy facility in Brookhaven Lab's Condensed Matter Physics and Materials Science Division. On his computer screens are electron diffraction patterns (left) and valence (outer-shell) electron distributions (right) of strontium titanate, a semiconductor with a "perovskite" crystal structure. Wu co-developed a method for measuring such distributions on the basis of the characteristic way that electrons get diffracted when they interact with a sample. The Microscopy Society of America recognized Wu's contributions to quantitative electron microscopy with the 2020 Chuck Fiori Award.

UPTON, NY—The Microscopy Society of America (MSA) has presented Lijun Wu of the U.S. Department of Energy’s (DOE) Brookhaven National Laboratory with the 2020 Chuck Fiori Award. Since 1993, the Chuck Fiori Award has been annually conferred to honor an outstanding technologist in the physical sciences who has made long-standing contributions to the field of microscopy or microanalysis.

For the past 20 years, Wu—an engineer in the Electron Microscopy and Nanostructure Group of Brookhaven Lab’s Condensed Matter Physics and Materials Science Division—has been developing quantitative approaches to transmission electron microscopy (TEM) and corresponding software programs to gain insights on quantum materials, batteries, catalysts, and other energy materials.

“Lijun has made significant contributions to the field of electron microscopy, especially quantitative electron diffraction,” said group leader and senior scientist Yimei Zhu. “Applying his expertise in the field and talents in computer programming, Lijun has advanced electron microscopy for material characterization. He well deserves the award.”

Most significantly, Wu together with Zhu and Johan Tafto, a visiting scientist from the University of Oslo in Norway, developed an electron diffraction–based method for measuring valence electron distribution.

“TEM is a robust tool that can be used to obtain atomic-resolution images and electron-energy loss spectroscopy (EELS),” said Wu. “These images and spectra reveal where atoms are located and what kinds of atoms are present. However, what I am interested in is accurately measuring the distribution of valence electrons through quantitative electron diffraction.”

Valence electrons are those in the outermost shell of an atom. When valence electrons of one atom interact with those of another atom, these atoms become chemically bonded. Knowing how atoms share or transfer electrons is important to understanding the physical properties of materials. For example, diamond is very hard because of the very strong covalent bonds formed between carbon atoms. Determining valence electron rearrangements due to bonding between atoms requires high-accuracy electron diffraction measurements.

The method that Wu and his collaborators developed relies on an imaging method called parallel recording of dark-field images (PARODI). Unlike traditional convergent beam electron diffraction, which focuses the electron beam on a sample, PARODI focuses the beam above the sample and simultaneously records multiple reflections from the same illuminated area. The images contain information not only on crystal orientation but also crystal thickness. This information is needed to measure the valence electron distributions for complex quantum materials such as high-temperature superconductors. Using a highly focused electron probe, the team further developed the PARODI technique to measure the displacement of atoms in crystal lattices with one-thousandth-of-a-nanometer accuracy.

Though a materials scientist by training, Wu is also an active software developer. He taught himself how to write software, starting with a simple program for indexing electron diffraction patterns. He went on to write more advanced programs for simulating electron microscopy images and diffraction patterns. His programs—which employ parallel coding for fast calculations and feature user-friendly interfaces—have been widely used by members of his group and collaborators. For example, one of these programs helped the team distinguish between static and thermal atomic displacements (equilibrium lattice distortions and vibrations due to heat, respectively) in layered cobaltate. By measuring these atomic displacements, they determined the mechanism by which this “thermoelectric” material converts heat into electric power.

Most recently, Wu has been collaborating with Zhu and visiting scientist Qingping Meng from Shanghai Jiao Tong University on a new technique to push the capability for determining valence electron distribution. This technique combines 4-D scanning TEM (STEM) with an approach for modeling electron density (multipole density formalism). The “4-D” refers to scanning a sample in 2-D and generating 2-D convergent beam diffraction patterns at each scan position.

“Currently, 4-D STEM only measures the projected total charge density—the density of valence and core electrons, and the charge of atomic nuclei,” explained Wu. “But the core electron density and nuclei charge do not change when a crystal is formed; only the valence electrons do. Therefore, knowing the total is not sufficient because it is the valence electrons that ultimately affect the physical properties of a material.”

First, Wu is upgrading his electron diffraction computer programs to calculate valence electron distributions with multipole density functions for 4-D STEM. The idea is to match these 4D-STEM simulations with observations from 4-D STEM experiments to determine the multipole density functions. Once the simulations and observations match, the redistribution of valence electrons due to chemical bonding can be known. Because 4-D STEM generates gigabytes of data in only a couple of minutes, Wu plan to incorporate machine learning in his technique.

“Only a few groups around the world are developing quantitative techniques for determining valence electron distribution,” said Wu. “I’m very happy to receive this award from MSA and have my work recognized.”

Wu completed his education in China, receiving bachelor’s and master’s degrees from Shanghai Jiao Tong University and a PhD from Hunan University, all in materials science. He came to Brookhaven Lab in 1996 as a visiting scientist, after spending the early part of his career as an associate professor at Hunan University. Following a three-year guest appointment, he became a permanent staff member. Over the past 20 years at Brookhaven, Wu has received three Spotlight Awards—one in 2008, another in 2012, and a third in 2017.

The Chuck Fiori Award is one of two Outstanding Technologist Awards and among several other awards given by MSA to early-, mid-, and late-career scientists and technologists. This year’s major award winners will be recognized at a ceremony on Aug. 3 during the Microscopy & Microanalysis 2020 Meeting in Milwaukee, WI.