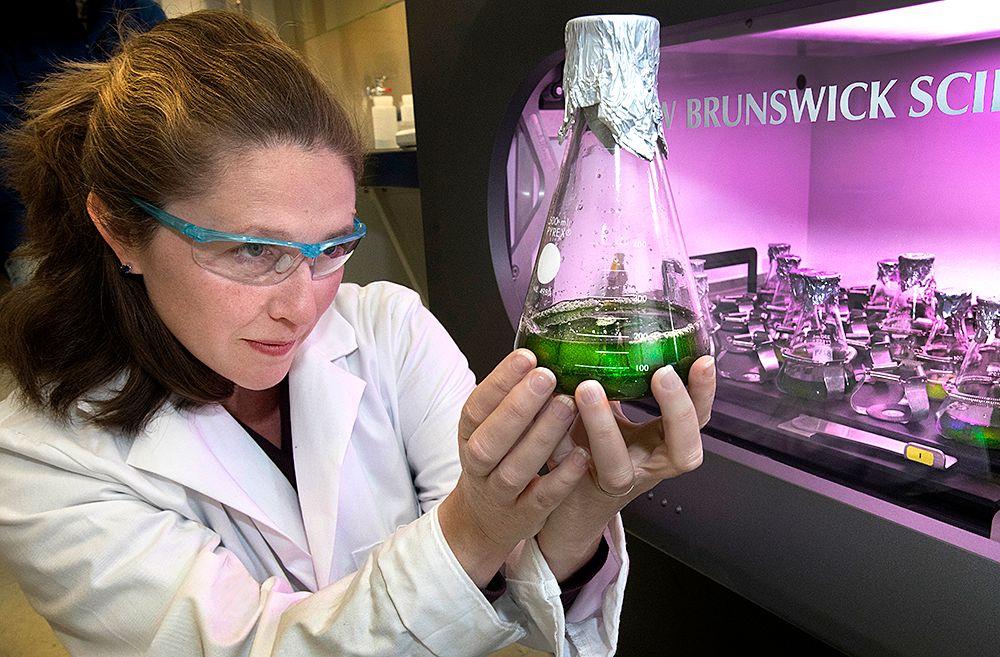 UPTON, NY—Plants could be the ultimate green-energy machines, efficiently harvesting sunlight, water, and carbon dioxide to make fuels and other carbon-based products—ideally on land that’s unsuitable for growing food and without the need for massive amounts of water and fertilizer. But to make that promising picture a reality, scientists need a thorough understanding of the genes that influence plants’ ability to survive and thrive. A new Quantitative Plant Science Initiative (QPSI) funded by the U.S. Department of Energy (DOE) and led by DOE’s Brookhaven National Laboratory aims to unlock that knowledge by taking a deep dive into the genomics of bioenergy crops.

“We’re exploring the genomic ‘dark space’ of bioenergy,” said Brookhaven Lab biologist Crysten Blaby-Haas, lead principal investigator of QPSI, referring to the thousands of plant genes whose DNA sequences have been decoded but whose functions remain unknown. Using a combination of genomic and gene-specific experiments along with computational modeling, QPSI scientists at Brookhaven Lab and collaborating institutions will provide multi-scale information—from atoms to proteins to genomes—that will be used to discover and understand function.

The knowledge gained by QPSI will address a key goal of DOE’s mission in energy security by guiding the development of bioenergy crops for optimal and sustainable growth on marginal soils.

“We want economically feasible bioenergy crops that are environmentally sustainable, where we don’t have to use fertilizer, or compete for farmland with food crops,” Blaby-Haas said. “So, we are looking at crop nutrition and how we can have very productive bioenergy crops while limiting inputs such as fertilizer and water.”

The initial focus, funded for three years, will be identifying genes involved in absorbing, transporting, and regulating the levels of essential micronutrients, specifically the trace elements iron and zinc. These trace elements play key roles in many plant processes, including regulating other nutrients and enabling the complex chemistry of photosynthesis.

“Iron and zinc are essential for plant health. But if you have too much, they can also be toxic,” Blaby-Haas said.

To identify genes involved in maintaining the delicate balance of trace metals, QPSI scientists will grow plants under greenhouse conditions, providing tightly controlled levels of nutrients, and monitor which genes are expressed and how the plants respond under different conditions. The technique is called “transcriptomics,” or RNA sequencing.

“To get information from the genome and to make proteins encoded by genes, the plant transcribes DNA into RNA,” Blaby-Haas explained. So, by tracking the levels of RNAs during low-, medium-, and high-iron conditions, for example, the scientists will learn which genes are important for responding to changes in iron levels.

“With this systems-biology approach, we’re not just looking at one transcript or one gene. We're looking at the entire genome, and all of the transcripts that are changing as a consequence of this changing environment,” she said. 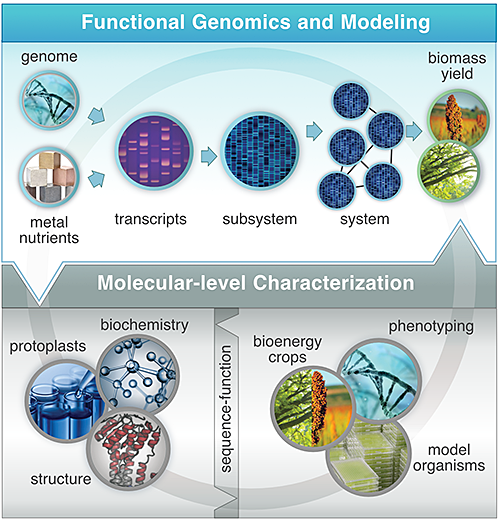 The Quantitative Plant Science Initiative aims to discover how micronutrients, initially iron and zinc, impact bioenergy crops. QPSI scientists will use functional genomics and computational modeling, along with a range of molecular characterization tools, to uncover the genes responsible for plant resilience and susceptibility to nutrient imbalances. The resulting knowledge will be used to guide selective-breeding and bioengineering strategies to improve sustainable bioenergy production.

The next question is what do those genes/proteins do? “It kind of becomes a detective story,” Blaby-Haas said.

“Transcriptomics just tells us which genes are expressed and to what level. But what does it all mean? That's where the computation and targeted experiments come in, to help us figure out what's the meaning of those changes.”

The scientists will use “data-mining” to collect evidence from publicly available sources and computational modeling and simulations to provide clues to help them decode each gene/protein’s function.

“Our collaborator Sam Seaver, at Argonne National Laboratory, has built a model of metabolism in the chloroplast, the plant-cell component where photosynthesis takes place. The model includes all the steps involved in photosynthesis, which is much more complicated than the simple ingredients of water, carbon dioxide, and sunlight. Our goal is to refine that model and to add complexity that incorporates the roles metals play and their impacts on metabolism,” Blaby-Haas said.

The existing model, combined with clues about which genes are active under different conditions and in different types of plants, gives them a place to start to develop best guesses, or hypotheses about gene/protein functions.

QPSI scientists will test the resulting hypotheses with molecular genetics and structural studies of the proteins identified through RNA sequencing.

As an example, molecular biologist Meng Xie, one of the QPSI science leads, will use protoplasts—single cells derived from plant tissues—to determine where proteins localize in the cell and what other proteins they need to interact with. These proteins can also be isolated in the lab. “Then we can test the molecular function of these proteins through biochemical studies and functional assays,” Blaby-Haas said.

QPSI science lead Qun Liu, who holds appointments in both the biology department and Brookhaven’s National Synchrotron Light Source-II (NSLS-II), and Desigan Kumaran of biology,  will grow crystals of the purified proteins and use the world-leading micro-focused x-ray beamlines at NSLS-II to reveal their 3-D atomic-level structure. New tools for cryo-electron microscopy (cryo-EM) at the Laboratory for BioMolecular Structure (LBMS), adjacent to NSLS-II, will enable similar structural studies of large protein complexes without the need for protein crystals. “Studying these structures can reveal crucial details about how these molecular machines work to carry out their functions in plants,” said Blaby-Haas.

QPSI science leads Xie and Tim Paape will also use reverse genetics to conduct experiments using tools to selectively “knock out” genes in fast-growing model plants and algae. Studying what happens when these genes are missing will add another piece to the puzzle, helping to reveal what each protein does.

“They have tools that we can take into the greenhouse—spectrometers that measure the light reflected from plant leaves. And they’ve developed models to link those ‘spectral fingerprints’ to specific plant traits. So, we can use those tools to monitor, for example, whether photosynthetic activity is increasing or decreasing in response to different levels of metals and gene expression,” Blaby-Haas said. 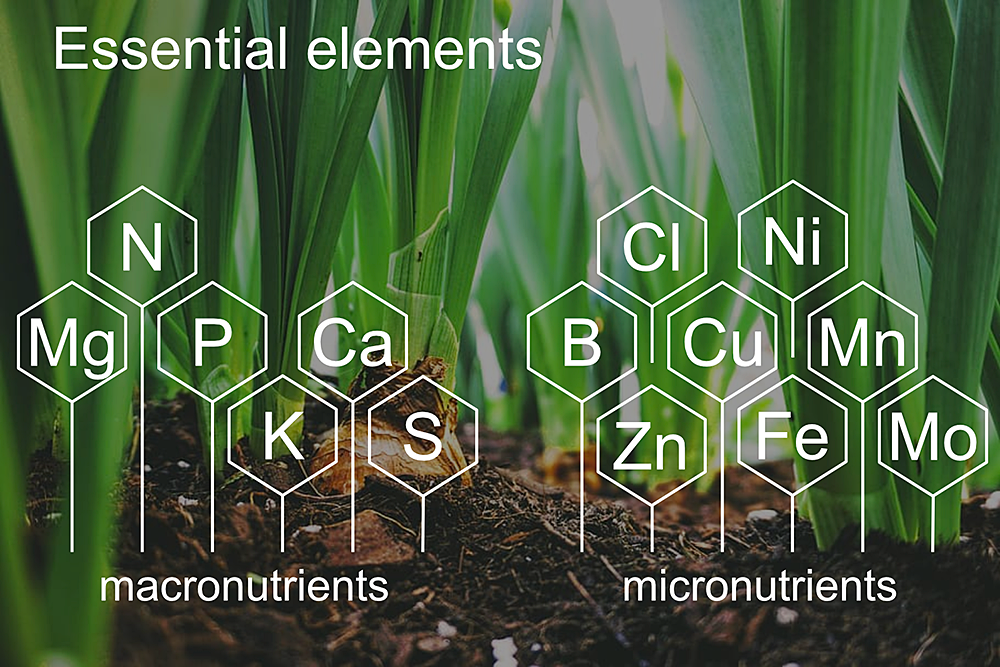 Bioenergy crops need a balanced diet of macro- and micro-nutrients. The Quantitative Plant Science Initiative's ultimate goal is the provide a genome-based understanding of the interdependence between nutrients, how plant nutrition affects metabolism, and how plants acquire these nutrients from the soil and distribute them to leaves.

All of these studies will help establish what Blaby-Haas calls “building blocks” for understanding the roles of genes and proteins in bioenergy crops.

“In the field, there are potentially countless variables,” she said. “But as long as you have these individual building blocks, you will have a really good foundation upon which to establish a more complete understanding of how the plant is responding in the field.”

That information, in turn, can guide the design of plants with improved productivity or enhanced abilities to cope with nutrient-poor conditions.

“Once we understand the function of a gene, then you can think of ways to leverage that information,” Blaby-Haas explained. “For instance, by understanding how a zinc transporter works, we can then design strategies to change how it works. Or with the resulting sequence-to-function understanding, we can leverage the wealth of available sequenced genomes and pick a related transporter that has beneficial molecular characteristics to use as a breeding target for developing better bioenergy varieties.”

While QPSI is initially focusing on the micronutrients iron and zinc, the team’s approach will be expanded to study other nutrients, and how those nutrients interact with one another.

“Being able to help the community produce better biofuels and more sustainable bioenergy crops is quite rewarding,” Blaby-Haas said.

“To achieve this goal, we have a team of really great people—geneticists, biochemists, structural biologists, computational scientists, and plant biologists. Multi-disciplinary teams are what you need to address a big challenge such as gene function in plants,” she said. “There's no other way you could do it.”