The following press release about new research results from the Large Hadron Collider (LHC) was issued by CERN, the European particle physics laboratory. The U.S. Department of Energy's Brookhaven National Laboratory serves as the U.S. host laboratory for the ATLAS experiment at the LHC and plays multiple roles in this international collaboration, from construction and project management to data storage, distribution, and analysis. Brookhaven Lab postdoctoral fellow Gaetano Barone coordinated the team of several international scientists and young researchers that analyzed the ATLAS data reported here. “These results shed light into the elusive sector of extremely rare decays of the Higgs boson to light fermions,” he said. “The coupling of the Higgs boson with muons has never been measured before, and such a result is an important milestone that opens up new frontiers in the study of the Higgs boson properties and may give us insight into new physics beyond the Standard Model of particle physics.” For more information about Brookhaven's role in research at ATLAS, see: http://www.bnl.gov/atlas/. To interview a Brookhaven Lab scientist about these new results, contact Karen McNulty Walsh, kmcnulty@bnl.gov, 631 344-8350. 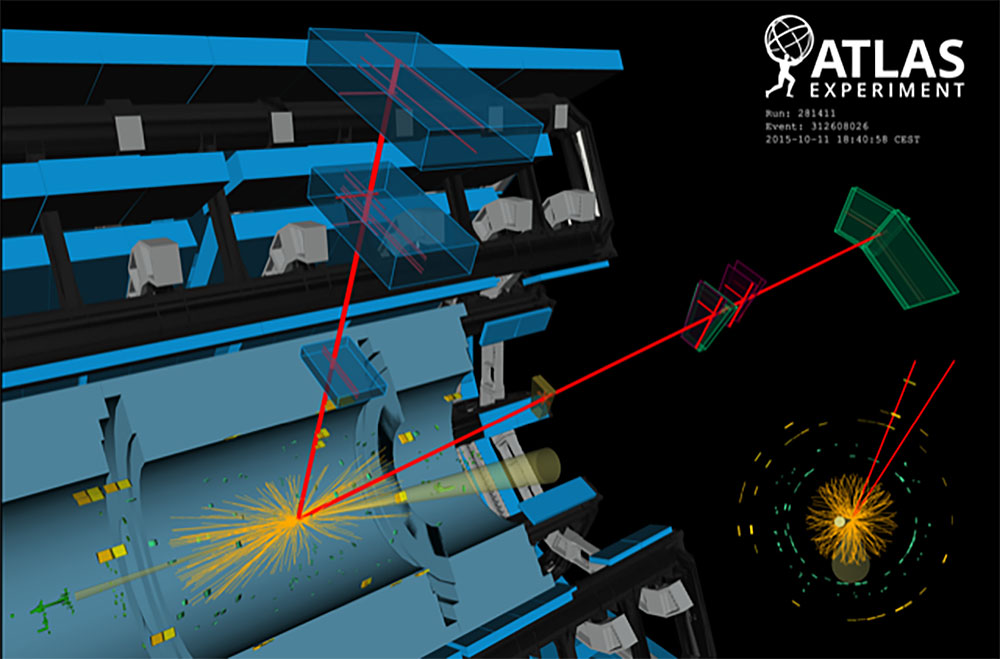 A candidate ATLAS event display of a Higgs boson decay to two muons.

GENEVA—The ATLAS and CMS experiments at CERN have announced new results which show that the Higgs boson decays into two muons. Muon is a heavier copy of the electron, one of the elementary particles that constitute the matter content of the Universe. While electrons are classified as a first-generation particle, muons belong to the second generation. The physics process of the Higgs boson decaying into muons is a rare phenomenon as only about one Higgs boson in 5000 decays into muons. These new results have pivotal importance for fundamental physics because they indicate for the first time that the Higgs boson interacts with second-generation elementary particles.

Physicists at CERN have been studying the Higgs boson since its discovery in 2012 to probe the properties of this very special particle. The Higgs boson, produced from proton collisions at the Large Hadron Collider, disintegrates—referred to as decay—almost instantaneously into other particles. One of the main methods of studying the Higgs boson’s properties is by analysing how it decays into the various fundamental particles and the rate of disintegration.

CMS achieved evidence of this decay with 3 sigma, which means that the chance of seeing the Higgs boson decaying into a muon pair from statistical fluctuation is less than one in 700. ATLAS’ two sigma result means the chances are one in 40. The combination of both results would increase the significance well above 3 sigma and provides strong evidence for the Higgs boson decay to two muons.

“CMS is proud to have achieved this sensitivity to the decay of Higgs bosons to muons, and to show first experimental evidence for this process. The Higgs boson seems to interact also with second-generation particles in agreement with the prediction of the Standard Model, a result that will be further refined with the data we expect to collect in the next run,” says Roberto Carlin, spokesperson for the CMS experiment.

A candidate of a Higgs boson decay into two muons as recorded by CMS.

“This evidence of Higgs boson decays to second-generation matter particles complements a highly successful Run 2 Higgs physics programme. The measurements of the Higgs boson’s properties have reached a new stage in precision and rare decay modes can be addressed. These achievements rely on the large LHC dataset, the outstanding efficiency and performance of the ATLAS detector, as well as the use of novel analysis techniques,” says Karl Jakobs, ATLAS spokesperson.

What makes these studies even more challenging is that, at the LHC, for every predicted Higgs boson decaying to two muons, there are thousands of muon pairs produced through other processes that mimic the expected experimental signature. The characteristic signature of the Higgs boson’s decay to muons is a small excess of events that cluster near a muon-pair mass of 125 GeV, which is the mass of the Higgs boson. Isolating the Higgs boson to muon-pair interactions is no easy feat.  To do so, both experiments measure the energy, momentum and angles of muon candidates from the Higgs boson’s decay. In addition, the sensitivity of the analyses was improved through methods such as sophisticated background modelling strategies and other advanced techniques such as machine-learning algorithms. CMS combined four separate analyses, each optimised to categorise physics events with possible signals of a specific Higgs boson production mode. ATLAS divided their events into 20 categories that targeted specific Higgs boson production modes.

The results, which are so far consistent with the Standard Model predictions, used the full data set collected from the second run of the LHC. With more data to be recorded from the particle accelerator’s next run and with the High Luminosity LHC, the ATLAS and CMS collaborations expect to reach the sensitivity (5 sigma) needed to establish the discovery of the Higgs boson decay to two muons and constrain possible theories of physics beyond the Standard Model which would affect this decay mode of the Higgs boson.

Brookhaven Lab’s contributions to ATLAS are funded by the U.S. Department of Energy’s Office of Science.