The following news release was issued on Aug. 10, 2020 by collaborators in the Daya Bay Reactor Neutrino Experiment in China and the MINOS+ Experiment at Fermi National Accelerator Laboratory. Scientists at the U.S. Department of Energy’s Brookhaven National Laboratory play key roles in both of these international experiments. The “sterile” neutrino is an elusive particle that cannot be directly detected by experimentation but could be established based on its quantum mechanical mixing with the three known types of neutrinos. The search for such a particle is motivated by its far-reaching implications for particle physics and cosmology, and also by hints from earlier experiments. The new result builds on the realization that the combination of data from reactor and accelerator experiments results in extraordinary sensitivity over a broad range of parameters.  “This result has substantially more data from both experiments and excludes the existence of such a sterile neutrino over many orders of magnitude in mass and mixing,” said Brookhaven Lab physicist Milind Diwan. “It is an important finding for the field.”

An international group of more than 260 scientists have produced one of the most stringent tests for the existence of sterile neutrinos to date. The scientists from two major international experimental groups, MINOS+ at the Department of Energy’s Fermilab and Daya Bay in China, are reporting results in Physical Review Letters ruling out oscillations into one sterile neutrino as the primary explanation for unexpected observations from recent experiments.

MINOS+ studies the disappearance of muon neutrinos produced by a Fermilab accelerator and propagating to an underground detector in northern Minnesota 735 kilometers away. Daya Bay uses eight identically designed detectors to precisely measure how electron neutrinos emitted by six nuclear reactors in China “disappear” as they morph into other types.

Neutrinos are elementary particles that, like electrons, cannot be broken down into smaller components. They are unlike any other particle known to exist in that they are able to penetrate extremely large amounts of matter without stopping. If a neutrino is shot from the surface of Earth toward its center, there is a very large probability that it will emerge intact on the other side. 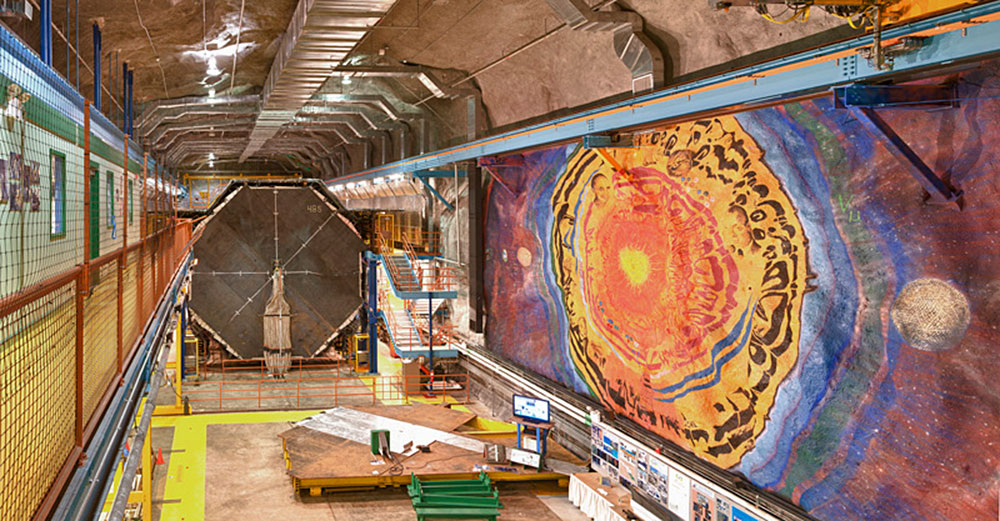 The MINOS+ and Daya Bay neutrino experiments have combined results to produce most stringent test yet for the existence of sterile neutrinos. In the MINOS+ experiment, Fermilab accelerators sent a beam of muon neutrinos through a detector located on the Fermilab site. The beam traveled 450 miles underground to a far detector, pictured here, in northern Minnesota. Photo: Reidar Hahn, Fermilab

There are three known types of neutrinos: electron, muon and tau. About two decades ago, scientists found that they can morph from one type into another through a phenomenon called “neutrino oscillation,” a discovery that was awarded the 2015 Nobel Prize in physics. For instance, a neutrino created as an electron type traveling through space can later be identified as a muon type or tau type.

Even though the vast majority of accumulated data to date can be explained by three known neutrinos, a few experiments have reported anomalous observations suggesting the existence of additional types. Among these are the LSND experiment at the Los Alamos National Laboratory and the MiniBooNE experiment at Fermilab. Both exposed their detectors to a beam of muon neutrinos and reported an excess of electron neutrino candidate events beyond what would be expected from oscillations involving only the three known types of neutrino, but possibly reconcilable if a new type of neutrino – a sterile neutrino – was involved. Sterile neutrinos would not be directly detectable, but their oscillation with the three known neutrinos would provide a unique pathway to establish their existence.

However, the new results from Daya Bay and MINOS+ question this possibility as an explanation of LSND and MiniBooNE results.

“The stakes are high; if this tantalizing interpretation of the anomalous results was confirmed, a revolution in physics would ensue. Sterile neutrinos would become the first particles to be found outside the Standard Model, our current best theory of elementary particles and their interactions. They could also be a candidate for dark matter and might have important consequences in cosmology,” said Daya Bay scientist Pedro Ochoa-Ricoux, associate professor of physics and astronomy at UC Irvine.

“This close collaboration of MINOS+ and Daya Bay scientists enabled the combination of two complementary world-leading constraints on muon neutrinos and electron antineutrinos disappearing into sterile neutrinos,” said Alexandre Sousa, associate professor of physics at the University of Cincinnati and one of the MINOS+ scientists who worked on the analysis. The disappearance of both particles needs to occur if electron (anti)neutrinos are to appear in a muon (anti)neutrino source via sterile oscillations with a single sterile neutrino. “So the combined result is a very powerful probe of the sterile neutrino hints we have to date.” 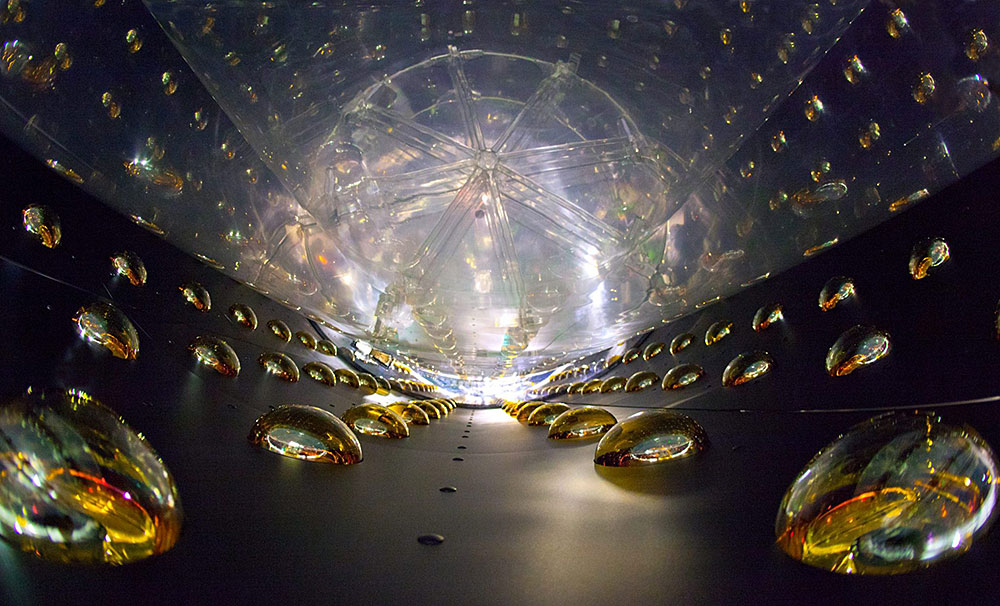 The Daya Bay neutrino detector walls are lined with photomultiplier tubes. The tubes are designed to amplify and record the faint flashes of light that signify an antineutrino interaction. Photo: Roy Kaltschmidt, Lawrence Berkeley National Laboratory

The neutrino disappearance measurements by MINOS+ and Daya Bay are now so precise that they essentially rule out explaining the combined anomalous observations from LSND, MiniBooNE and other experiments solely through sterile neutrino oscillations, according to Ochoa-Ricoux.

“We would all have been absolutely thrilled to find evidence for sterile neutrinos, but the data we have collected so far do not support any kind of oscillation with these exotic particles,” he said.

The combined analysis reported by Daya Bay and MINOS+ not only ruled out the specific kind of sterile neutrino oscillation that would explain the anomalous results but also looked for other sterile neutrino signatures with never-before-achieved sensitivity, yielding some of the most stringent limits on the existence of these elusive particles to date.

“The two experiments use multiple detectors with well-understood uncertainties and have collected an unprecedentedly large number of events. Requiring consistency between the data sets of the two experiments provides a very rigorous test of sterile neutrino existence,” said MINOS+ spokespersons, Jenny Thomas, professor at University College London, and Karol Lang professor at the University of Texas at Austin.

“This joint effort very effectively tackles a fundamental problem in physics,” said Daya Bay spokespersons Kam-Biu Luk of Lawrence Berkeley National Laboratory and UC Berkeley and Jun Cao of the Institute of High Energy Physics in Beijing. “While there is still room for a sterile neutrino to be lurking in the shadows, we have significantly shrunk the available hiding space.”

The MINOS+ and Daya Bay neutrino experiments are supported by the Department of Energy Office of Science.