Still No 'Sterile' Neutrinos, But the Search Goes On

Looking through a window into the "dark" universe 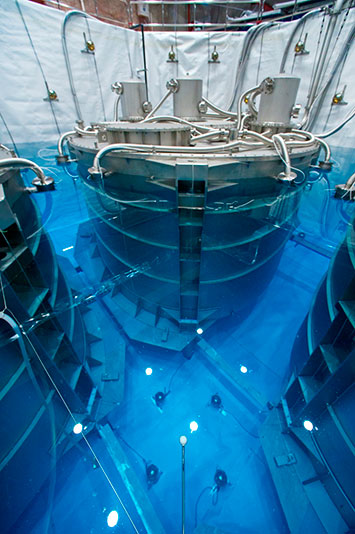 Reports of the non-existence of the so-called “sterile” neutrino are premature, say scientists at the U.S. Department of Energy’s Brookhaven National Laboratory—even as they release results from two experiments that further limit the places this elusive particle may be hiding. These results, described in three papers published in Physical Review Letters (PRL) by scientists working on the Daya Bay Neutrino Experiment in China and the Main Injector Neutrino Oscillation Search (MINOS) at Fermi National Accelerator Laboratory—like results recently announced by another neutrino experiment known as IceCube—greatly narrow the “phase space” where scientists must hunt.

Whether you look at the new results as “zeroing in” on the elusive particles, or largely ruling out their existence, the scientists say the search for sterile neutrinos will and should go on.

“Finding true evidence that sterile neutrinos exist would profoundly change our understanding of the universe,” said Brookhaven physicist Xin Qian, one of the neutrino hunters. These light, electrically neutral particles could be components of the mysterious “dark world,” including the dark matter that physicists know makes up about a quarter of the universe, but has never been directly detected.

“In the Big Bang at the very beginning of the universe, some of the energy turned into particles that so far have proven to be completely invisible,” explained Milind Diwan, another Brookhaven neutrino physicist. “That there exists such matter that is dark—undetectable—is an established fact. What that is composed of is a big mystery. Every time we find a hint of a new neutral particle that could account for this missing energy—or a new search method—it offers us a window into the universe that we must explore.”

Even the process of figuring out how to search for an elusive, undetectable particle—what to measure and how to sift through the data—is worthwhile, the scientists say, because it sparks creativity and the evolution of scientific thinking in unexpected ways.

Finding true evidence that sterile neutrinos exist would profoundly change our understanding of the universe.”

“These analyses are all side results to the main research programs at experiments where scientists realized they had the ability to look at the data in new and interesting ways,” said Diwan. “In this way, these programs are creating a group of young researchers who understand how to scrutinize data and question results, and they will become leaders with the types of skills that we need in science.”

Brookhaven Lab scientists play important roles in both Daya Bay and MINOS, and were essential to understanding how the data collected for the experiments’ main research goals could be used to search for “signatures” of sterile neutrinos. For example, Brookhaven’s Qian led the development of the statistical methods for combining results from these experiments, working with a group of postdoctoral fellows and graduate students—about half from Daya Bay and half from MINOS.

“It took some effort to finalize what kind of statistical method to use,” said Wei Tang, one of the Brookhaven postdocs. “Working with the two collaborations, with very different cultures, is a good example of how this work is done—how science brings people together,” he said. 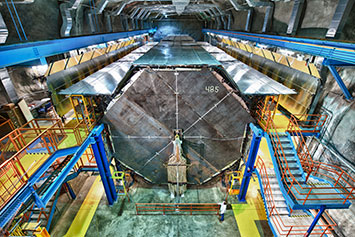 Both MINOS and Daya Bay are designed to explore details of neutrinos, tiny subatomic particles that carry no electrical charge and travel vast distances without interacting with anything. The Standard Model of particle physics—a list of known particles and the forces through which they interact—describes three known neutrino “flavors” (electron, muon, and tau), named for their relation with charged particles of those names.

But the Standard Model also says that neutrinos have no mass—an idea recently refuted by experiments confirming these particles’ ability to change identities among the three flavors. These flavor-shifting “oscillations” are only possible if neutrinos exist in different mass states—indeed, a mixture of different masses for each known flavor. Therefore detecting neutrino oscillations, a discovery that garnered the 2015 Nobel Prize in physics, is proof that neutrinos do have mass—pointing out at least one hole in the Standard Model.

“The fact that neutrinos have mass is a strong hint that we may discover other things we don’t know about these particles,” Qian said. “It would be earth-shaking if a fourth type, sterile neutrinos, really existed.”

The search for sterile neutrinos is also motivated by theoretical ideas and hints from an earlier experiment at Los Alamos National Laboratory that may have observed a new kind of neutrino oscillation—approximately described as a two-step shift that transforms existing muon neutrinos into neutrinos of a fourth, undetectable (a.k.a. “sterile”) flavor, which then oscillate again to become electron neutrinos. The Los Alamos team measured the rate of this proposed two-step transformation through an undetectable intermediary flavor.

Warning: It gets a bit tricky here 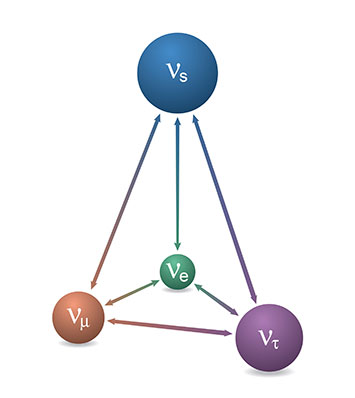 The three known neutrinos, electron (νe), muon (νμ), and tau (ντ)—represented as points at the base of this pyramid—can each change into one another. If a fourth "sterile" neutrino exists, it would occupy a point at the apex of the pyramid so that each flavor can transform in either direction into any other flavor. Since this sterile flavor cannot be detected directly, scientists have been searching for evidence of two-step transformations among the other types, presumably through this intermediate undetectable flavor.

In step one—muon neutrinos transforming into proposed sterile ones—we’re talking about measuring a transformation from a particle that scientists can create and detect to a particle they cannot “see” in any way. So instead of trying to measure something undetectable, they look for the rate at which the muon neutrinos disappear without transforming into either of the two other known types. This work was done by the MINOS experiment, which produces a beam of muon neutrinos to measure their oscillations to other flavors.

To tackle the second step—the transformation from an undetectable particle to a detectable one—the scientists had an even bigger challenge.

“We can’t make a beam of the undetectable sterile neutrinos—after all, we don’t even know if they exist!,” Diwan said.

Instead, they take advantage of one of the basic laws of Nature—namely, that the rate of this process should be equal whether it’s running forward or in reverse—and measure the rate of the reverse process. They use a beam of electron neutrinos (actually electron antineutrinos, which for the purpose of this experiment are the same) and measure the rate at which they disappear, ruling out or accounting for those transforming into one of the two other known types.

The electron antineutrinos are generated in the cores of nuclear reactors—in this case, a set of six that are part of the Daya Bay Neutrino Experiment in China. Detectors at varying distances from the reactors pick up signals that allow scientists to calculate oscillation rates.

In the papers publishing in PRL—one from the Daya Bay collaboration, one from MINOS, and another presenting a combined analysis of the Daya Bay and MINOS results as well as a reanalysis of results from Bugey, an older experiment in France—the main conclusion is that the accounting doesn’t work out. Multiplying the rates of the two individual reactions did not match the Los Alamos data. Overlapping plots of results from the various analyses revealed only small remaining “parameter regions” where the sterile neutrinos could still be “hiding.”

IceCube, an experiment that measures oscillations of neutrinos from the atmosphere with a detector deep under the ice of Antarctica, also recently reported new results. Its search for the disappearance of muon neutrinos to a proposed sterile flavor also came up empty handed, with no sterile neutrinos to be found. 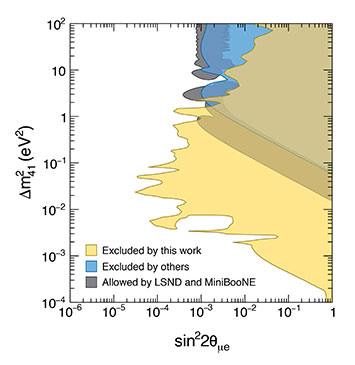 The search for sterile neutrinos was motivated by hints of their existence from the LSND experiment at Los Alamos National Laboratory and the MiniBooNE experiment at Fermi National Accelerator Laboratory (gray area). The current analyses by Daya Bay and MINOS have ruled out the yellow shaded region, while other experiments have ruled out the blue area, leaving only the remaining gray region as a possible hiding place.

Future experiments at Fermilab will continue to search in the remaining channels.

But even if they don’t find the elusive particles, the search and the competition and collaboration it fosters between and among scientists from different experiments and in different nations will create new opportunities. These teams are building the technologies—detectors, data infrastructure, and analysis tools—needed for the next generation of experiments, including the Deep Underground Neutrino Experiment to be hosted at Fermilab with widespread, international participation.

“The physics of neutrino mass and the physics of the universe—its formation and structure—are intimately related,” said Diwan.  “The discoveries in the last few decades have shown that the universe is filled with electrically neutral invisible stuff including neutrinos that could have unknown and rich interactions. Unraveling the mysterious properties of neutrinos is proving to be one of the few possible windows into this dark world.”