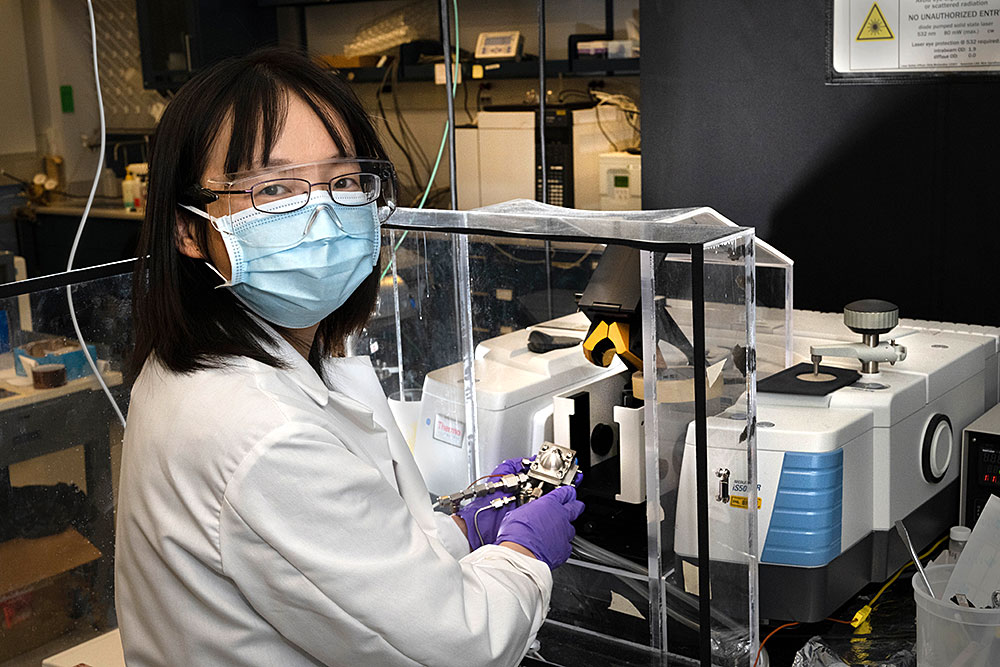 UPTON, NY—Scientists at the U.S. Department of Energy’s Brookhaven National Laboratory, Stony Brook University (SBU), and other collaborating institutions have uncovered dynamic, atomic-level details of how an important platinum-based catalyst works in the water gas shift reaction. This reaction transforms carbon monoxide (CO) and water (H2O) into carbon dioxide (CO2) and hydrogen gas (H2)—an important step in producing and purifying hydrogen for multiple applications, including use as a clean fuel in fuel-cell vehicles, and in the production of hydrocarbons.

But because platinum is rare and expensive, scientists have been seeking ways to create catalysts that use less of this precious metal. Understanding exactly what the platinum does is an essential step.

The new study, published in Nature Communications, identifies the atoms involved in the catalyst’s active site, resolving earlier conflicting reports about how the catalyst operates. The experiments provide definitive evidence that only certain platinum atoms play an important role in the chemical conversion.

“Part of the challenge is that the catalyst itself has a complex structure,” explained lead author Yuanyuan Li, a research scientist at SBU’s Materials Science and Chemical Engineering Department who has a guest appointment in Brookhaven Lab’s Chemistry Division and works under the guidance of Brookhaven/SBU joint appointee Anatoly Frenkel. 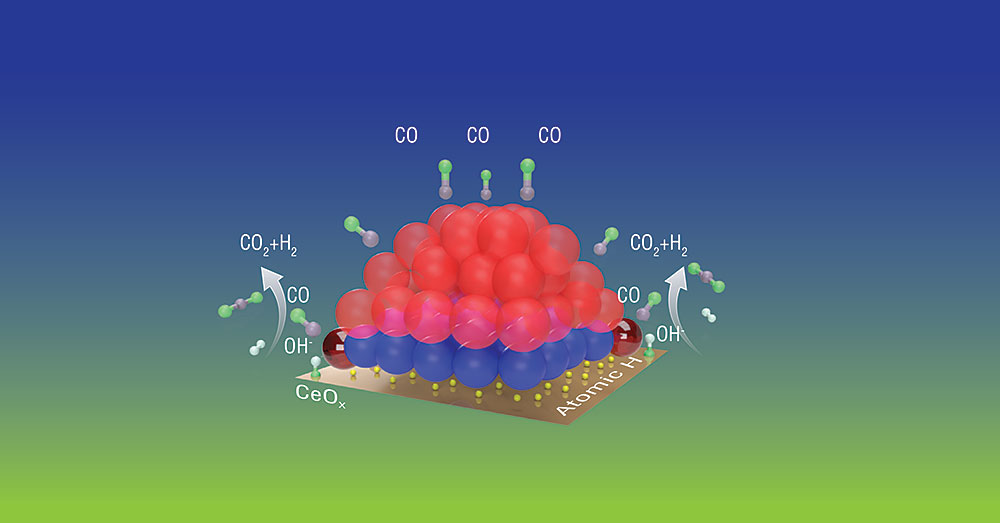 Scientists studying a water gas shift reaction catalyst made of platinum atoms (red and blue) on a cerium oxide (CeOx) surface discovered that only some platinum atoms around the periphery of the nanoparticle (shiny dark red) get activated to take part in the reaction. These activated platinum atoms transfer oxygen from OH groups (originally from water molecules) to carbon monoxide (CO), transforming it to CO2, leaving the H to combine with atomic hydrogen to form H2. Understanding these dynamics may help scientists design catalysts that require fewer platinum atoms.

“The catalyst is made of platinum nanoparticles (clumps of platinum atoms) sitting on a cerium oxide (ceria) surface. Some of those platinum atoms are on the surface of the nanoparticle, some are in the core; some are at the interface with ceria, and some of those are at the perimeter—the outside edges—of that interface,” Li said. “Those positions and how you put the particles on the surface may influence which atoms will interact with the support or with gas molecules, because some are exposed and some are not.”

Earlier experiments had produced conflicting results about whether the reactions occur on the nanoparticles or at single isolated platinum atoms, and whether the active sites are positively or negatively charged or neutral. Details of how the ceria support interacts with the platinum to activate it for catalytic activity were also unclear.

“We wanted to address these questions,” said Li. “To identify the active site and determine what is really happening at this site, it is better if we can investigate this type of catalyst at the atomic level,” she noted.

The team, which included scientists from Brookhaven’s Center for Functional Nanomaterials (CFN) and other institutions throughout the U.S. and in Sweden, used a range of techniques to do just that. They studied the catalyst under reaction conditions and, unexpectedly, captured a peculiar effect that occurred when the catalysts reached their active state in reaction conditions. 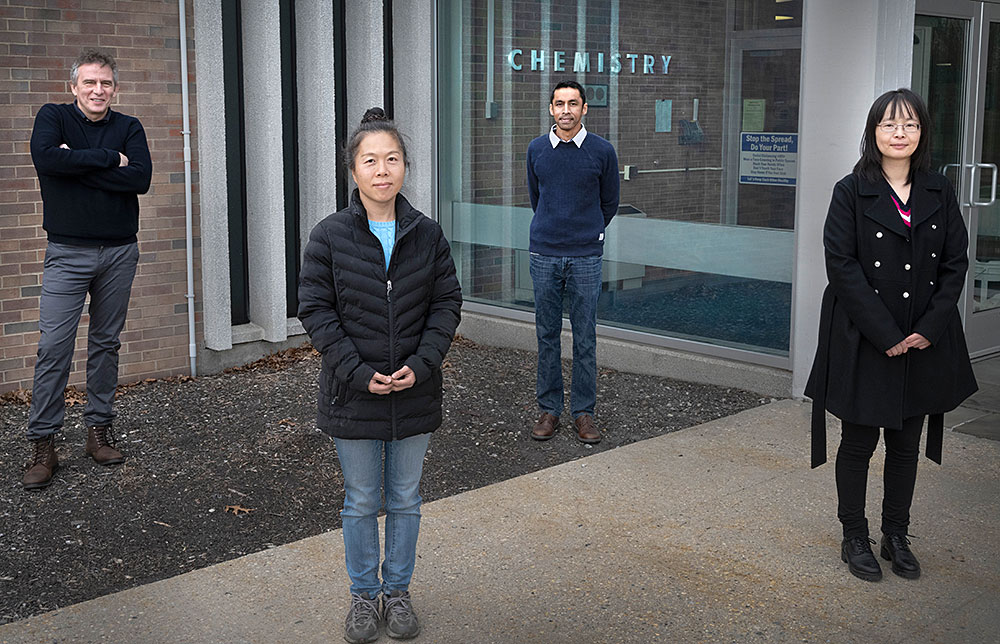 “The platinum atoms at the perimeter of the particles were ‘dancing’ in and out of focus in an electron microscopy experiment carried out by our collaborators, while the rest of the atoms were much more stable,” Frenkel said. Such dynamic behavior was not observed when some of the reactants (CO or water) were removed from the stream of reacting molecules.

“We found that only the platinum atoms at the perimeter of the interface between the nanoparticles and ceria support provide the catalytic activity,” Li said. “The dynamic properties at these perimeter sites allow the CO to get oxygen from the water so it can become CO2, and the water (H2O) loses oxygen to become hydrogen.”

Now that the scientists know which platinum atoms play an active role in the catalyst, they may be able to design catalysts that contain only those active platinum atoms.

“We might assume that all the surface platinum atoms are working, but they are not,” Li said. “We don’t need them all, just the active ones. This could help us make the catalyst less expensive by removing the atoms that are not involved in the reaction. We believe that this mechanism can be generalized to other catalytic systems and reactions,” she added.

Electron microscopy “snapshots” at the CFN and at the National Institute of Standards and Technology revealed the dynamic nature of the perimeter platinum atoms. “In some images, the perimeter site is there, you can see it, but in some images it is not there. This is evidence that these atoms are very dynamic, with high mobility,” Li said.

Infrared (IR) spectroscopy studies in Brookhaven’s Chemistry Division revealed that the appearance of the perimeter sites coincided with “oxygen vacancies”—a kind of defect in the cerium oxide surface. These studies also showed that CO tended to migrate across the platinum nanoparticle surface toward the perimeter atoms, and that hydroxy (OH) groups lingered on the ceria support near the perimeter platinum atoms.

“So it seems like the perimeter platinum atoms bring the two reactants, CO and OH (from the water molecules) together,” Li said.

X-ray photoelectron spectroscopy studies in Chemistry revealed that perimeter platinum atoms also became activated—changed from a nonmetallic to a metallic state that could capture oxygen atoms from the OH groups and deliver that oxygen to CO. “This really shows that these activated perimeter platinum sites enable the reaction to take place,” Li said.

“We see the structure is changing under reaction conditions,” Li said.

Those studies also revealed an unusually long bond between the platinum atoms and the oxygen on the ceria support, suggesting that something invisible to the x-rays was occupying space between the two.

“We think there is some atomic hydrogen between the nanoparticle and the support. X-rays can’t see light atoms like hydrogen. Under reaction conditions, those atomic hydrogens will recombine to form H2,” she added.

The structural features and details of how the dynamic changes are connected to reactivity will help the scientists understand the working mechanism of this particular catalyst and potentially design ones with better activity at lower cost. The same techniques can also be applied to studies of other catalysts.