Definitive, real-world evidence for "freezing fragmentation" of drizzle as a major source of ice in slightly supercooled clouds has important implications for forecasting weather and climate

Data collected at the Department of Energy's Atmospheric Radiation Measurement (ARM) atmospheric observatory in Utqiagvik (Barrow), Alaska, indicate that shattering drizzle droplets play a major role in the formation of "secondary" ice in mixed-phase clouds. The results will improve how these cloud processes are represented in computational models used to forecast climate and local snowfall. (Credit: ARM user facility)

UPTON, NY—Where does snow come from? This may seem like a simple question to ponder as half the planet emerges from a season of watching whimsical flakes fall from the sky—and shoveling them from driveways. But a new study on how water becomes ice in slightly supercooled Arctic clouds may make you rethink the simplicity of the fluffy stuff. The study, published by scientists from the U.S. Department of Energy’s (DOE) Brookhaven National Laboratory in the Proceedings of the National Academy of Sciences, includes new direct evidence that shattering drizzle droplets drive explosive “ice multiplication” events. The findings have implications for weather forecasts, climate modeling, water supplies—and even energy and transportation infrastructure.

“Our results shed new light on prior lab-experiment-based understanding about how supercooled water droplets—water that’s still liquid below its freezing point—turn into ice and eventually snow,” said Brookhaven Lab atmospheric scientist Edward Luke, the lead author on the paper. The new results, from real-world long-term cloud radar and weather-balloon measurements in mixed-phase clouds (composed of liquid water and ice) at temperatures between 0 and -10 degrees Celsius (32 and 14° Fahrenheit), provide evidence that freezing fragmentation of drizzle drops is important to how much ice will form and potentially fall from these clouds as snow.

“Now climate models and the weather forecast models used to determine how much snow you’ll have to shovel can make a leap forward by using much more realistic physics to simulate ‘secondary’ ice formation,” Luke said.

What is secondary ice? 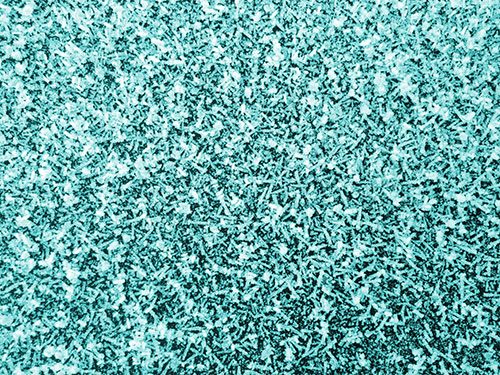 Secondary ice generated at temperatures warmer than -10°C preferentially grows into slender, needle-shaped ice crystals. The way in which this shape alters the polarization of a radar signal enables the secondary ice to be identified and measured from ground-based, remote-sensing instrumentation.

Precipitating snow from supercooled clouds usually originates from “primary” ice particles, which form when water crystallizes on select tiny specks of dust or aerosols in the atmosphere, known as ice-nucleating particles. However, at slightly supercooled temperatures (i.e., 0 to -10°C), aircraft observations have shown that clouds can contain far more ice crystals than can be explained by the relatively few ice-nucleating particles present. This phenomenon has puzzled the atmospheric research community for decades. Scientists have thought that the explanation is “secondary” ice production, in which the additional ice particles are generated from other ice particles. But catching the process in action in the natural environment has been difficult.

The new results from the Arctic show that larger supercooled water droplets, classified as drizzle, play a much more important role in producing secondary ice particles than commonly thought.

“When an ice particle hits one of those drizzle drops, it triggers freezing, which first forms a solid ice shell around the drop,” explained Fan Yang, a co-author on the paper. “Then, as the freezing moves inward, the pressure starts to build because water expands as it freezes. That pressure causes the drizzle drop to shatter, generating more ice particles.”

The data show that this “freezing fragmentation” process can be explosive.

“If you had one ice particle triggering the production of one other ice particle, it would not be that significant,” Luke said. “But we’ve provided evidence that, with this cascading process, drizzle freezing fragmentation can enhance ice particle concentrations in clouds by 10 to 100 times—and even 1,000 on occasion!

“Our findings could provide the missing link for the mismatch between the scarcity of primary ice-nucleating particles and snowfall from these slightly supercooled clouds.” 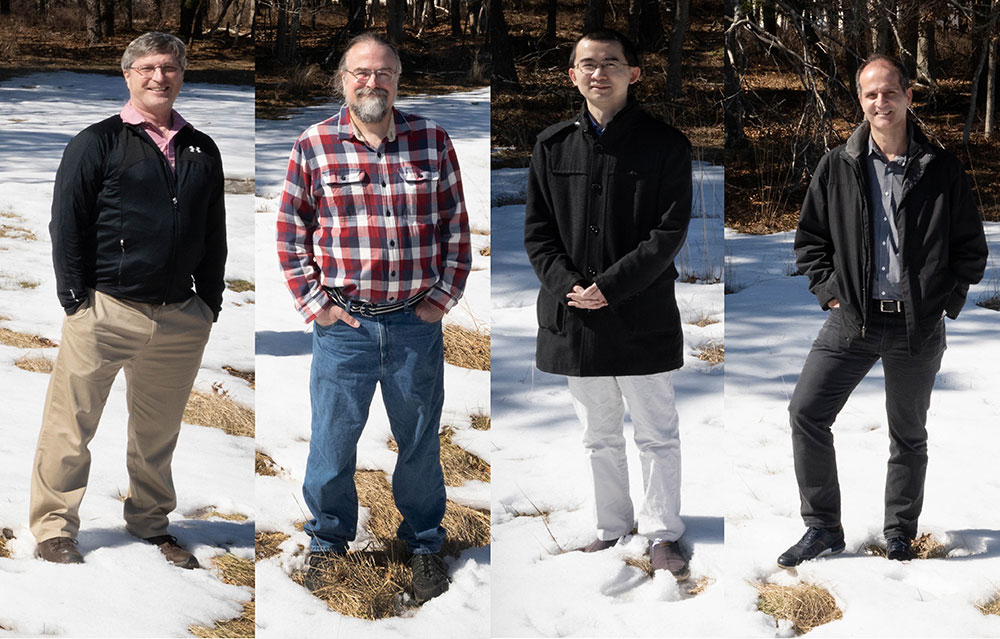 The new results hinge upon six years of data gathered by an upward-pointing millimeter-wavelength Doppler radar at the DOE Atmospheric Radiation Measurement (ARM) user facility’s North Slope of Alaska atmospheric observatory in Utqiagvik (formerly Barrow), Alaska. The radar data are complemented by measurements of temperature, humidity, and other atmospheric conditions collected by weather balloons launched from Utqiagvik throughout the study period.

Brookhaven Lab atmospheric scientist and study co-author Pavlos Kollias, who is also a professor in the Atmospheric Sciences Division at Stony Brook University, was crucial to the collection of this millimeter-wavelength radar data in a way that made it possible for the scientists to deduce how secondary ice was formed.

“ARM has pioneered the use of short-wavelength cloud radars since the 1990s to better understand clouds’ microphysical processes and how those affect weather on Earth today. Our team led the optimization of their data sampling strategy so information on cloud and precipitation processes like the one presented in this study can be obtained,” Kollias said. 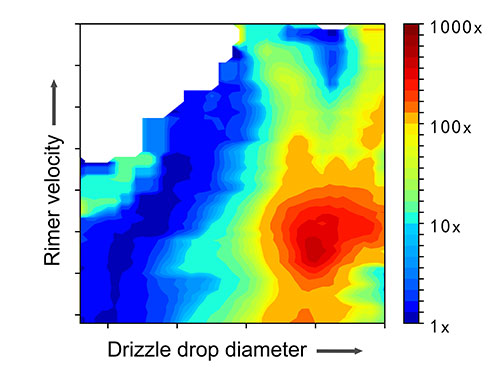 The radar’s millimeter-scale wavelength makes it uniquely sensitive to the sizes of ice particles and water droplets in clouds. Its dual polarization provides information about particle shape, allowing scientists to identify needlelike ice crystals—the preferential shape of secondary ice particles in slightly supercooled cloud conditions. Doppler spectra observations recorded every few seconds provide information on how many particles are present and how fast they fall toward the ground. This information is critical to figuring out where there are rimers, drizzle, and secondary ice particles.

Using sophisticated automated analysis techniques developed by Luke, Yang, and Kollias, the scientists scanned through millions of these Doppler radar spectra to sort the particles into data buckets by size and shape—and matched the data with contemporaneous weather-balloon observations on the presence of supercooled cloud water, temperature, and other variables. The detailed data mining allowed them to compare the number of secondary ice needles generated under different conditions: in the presence of just rimers, rimers plus drizzle drops, or just drizzle.

“The sheer volume of observations allows us for the first time to lift the secondary ice signal out of the ‘background noise’ of all the other atmospheric processes taking place—and quantify how and under what circumstances secondary ice events happen,” Luke said. 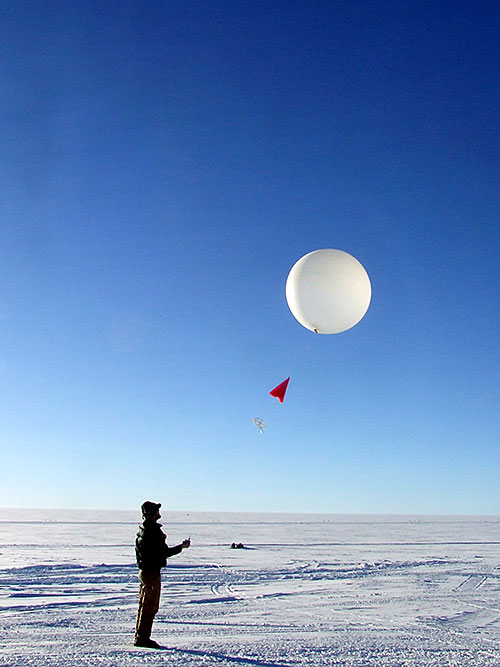 Weather balloons launched throughout the study period provided data on local temperature, humidity, and other atmospheric conditions. By matching those data with Doppler radar measurements that are sensitive to the size, shape, and movement of ice and water particles in clouds, scientists were able to identify the conditions responsible for explosive ice multiplication events. (Credit: ARM user facility)

These real-world data give the scientists the ability to quantify the “ice multiplication factor” for various cloud conditions, which will improve the accuracy of climate models and weather forecasts.

“Weather prediction models can’t handle the full complexity of the cloud microphysical processes. We need to economize on the computations, otherwise you’d never get a forecast out,” said Andrew Vogelmann, another co-author on the study. “To do that, you have to figure out what aspects of the physics are most important, and then account for that physics as accurately and simply as possible in the model. This study makes it clear that knowing about drizzle in these mixed-phase clouds is essential.”

Besides helping you budget how much extra time you’ll need to shovel your driveway and get to work, a clearer understanding of what drives secondary ice formation can help scientists better predict how much snow will accumulate in watersheds to provide drinking water throughout the year. The new data will also help improve our understanding of how long clouds will stick around, which has important consequences for climate.

“More ice particles generated by secondary ice production will have a huge impact on precipitation, solar radiation (how much sunlight clouds reflect back into space), the water cycle, and the evolution of mixed-phase clouds,” Yang said.

“Mixed-phase clouds, which have both supercooled liquid water and ice particles in them, can last for weeks on end in the Arctic,” Vogelmann said. “But if you have a whole bunch of ice particles, the cloud can get cleared out after they grow and fall to the ground as snow. Then you’ll have sunlight able to go straight through to start heating up the ground or ocean surface.”

That could change the seasonality of snow and ice on the ground, causing melting and then even less reflection of sunlight and more heating.

“If we can predict in a climate model that something is going to change the balance of ice formation, drizzle, and other factors, then we’ll have a better ability to anticipate what to expect in future weather and climate, and possibly be better prepared for these impacts,” Luke said.

Maximilian Maahn, now at Leipzig University, was an additional co-author on this study. At the time of the study, he was affiliated with the Cooperative Institute for Research in Environmental Sciences, a partnership between the National Oceanic and Atmospheric Administration (NOAA) and the University of Colorado Boulder.