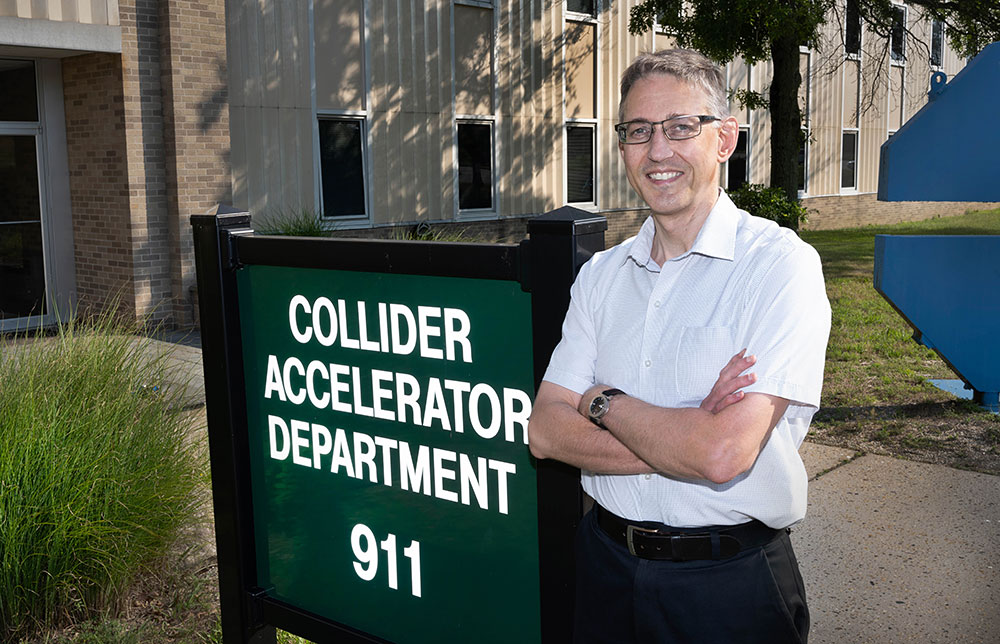 C-AD develops, improves, and operates the suite of particle and heavy ion accelerators at Brookhaven National Lab, including the Relativistic Heavy Ion Collider (RHIC) and Alternating Gradient Synchrotron (AGS), that are key to nuclear physics experiments exploring the building blocks of matter. The department will play an important role in supporting the upcoming construction of the Electron-Ion Collider (EIC), a one-of-a-kind nuclear physics research facility.

Fischer, who previously served as Associate Chair for Accelerators & Applications and Accelerator Division Head in C-AD, has broad interests in accelerator science, technology, and applications. He succeeds Thomas Roser, who will retire on July 17, 2021.

“Wolfram is a highly accomplished accelerator physicist and has been playing important leadership roles in accelerator science at Brookhaven and in the broader accelerator community, including the EIC," said Haiyan Gao, Associate Laboratory Director (ALD) for Nuclear & Particle Physics (NPP). “I look forward to working closely with Wolfram in his new role as the C-AD chair.”

As chair, Fischer looks forward to working closely with colleagues in the NPP Directorate and EIC Directorate at Brookhaven Lab in the coming years on the successful transition from completing the science mission of RHIC to the start of the EIC.

“C-AD and its predecessors have a storied history, with four Nobel Prizes awarded for research performed at the Cosmotron and AGS, and a two-decade long physics program of groundbreaking work at RHIC with heavy ion and polarized proton collisions.” Fischer said. “It will be very exciting to add another chapter to that story.”

Fischer said he also looks forward to growing the department’s application programs, especially in the Medical Isotope Research and Production Program, which provides isotopes used for medical imaging, cancer treatment, and research at hospitals and medical centers around the world.

Also part of the C-AD complex is the Booster accelerator, which supplies the ion beams for the NASA Space Radiation Laboratory at Brookhaven, where scientists study the effects of simulated space radiation on biological and physical systems.

He joined the Lab in 1995 as a postdoc upon receiving his Ph.D. from the University of Hamburg in Germany. He is a Fellow of the American Physical Society (APS), a Senior Member of IEEE, and regularly serves on accelerator advisory committees in the United States and abroad. He received the APS Outstanding Referee Award in 2016 and the Brookhaven Science and Technology Award in 2017.