Tailoring levels of enzyme has many potential applications, including renewable production of p-hydroxybenzoic acid, improved biofuel production and/or timber durability, and a path for long-term carbon sequestration 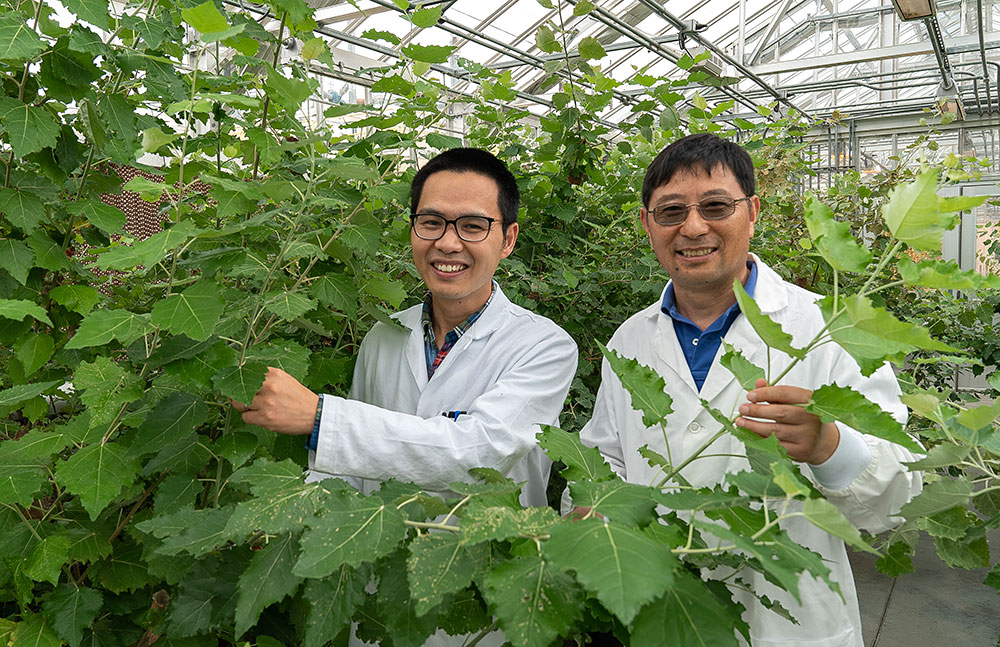 Postdoctoral fellow Yunjun Zhao, the first author on the paper, and Brookhaven Lab biochemist Chang-Jun Liu with poplar plants in the greenhouse at Brookhaven National Laboratory.

UPTON, NY — Scientists studying the biochemistry of plant cell walls have identified an enzyme that could turn woody poplar trees into a source for producing a major industrial chemical. The research, just published in Nature Plants, could lead to a new sustainable pathway for making “p-hydroxybenzoic acid,” a chemical building block currently derived from fossil fuels, in plant biomass.

“P-hydroxybenzoic acid is a versatile chemical feedstock. It can serve as a building block for making liquid crystals, a plasticizer of nylon resin, a sensitizer for thermal paper, and a raw material for making paraben, dyes, and pigments,” said Chang-Jun Liu, a plant biochemist at the U.S. Department of Energy’s Brookhaven National Laboratory and lead author on the paper.

The global market value of p-hydroxybenzoic acid stood at U.S. $59 million in 2020 and is projected to reach $80 million by 2026. But the current process for making this important chemical relies on petrochemicals. Its synthesis requires harsh reaction conditions (high temperature and high pressure) and has negative environmental impacts. Finding an economical and sustainable way to make p-hydroxybenzoic acid in plants could help mitigate environmental impacts and contribute to an emerging bioeconomy.

“We’ve identified a key enzyme responsible for the synthesis and accumulation of p-hydroxybenzoate (pBA)—the conjugate base of p-hydroxybenzoic acid—in lignin, one of three major polymers that make up the structural support that surrounds plant cells,” said Liu. “This discovery may enable us to engineer plants to accumulate more of this chemical building block in their cell walls, thereby potentially adding value to the biomass.”

Brookhaven Lab scientists identified an enzyme (PHBMT1) that transfers p-hydoxybenzoate (green) to lignin building blocks in poplar. The resulting conjugate is then incorporated into the nascent lignin polymer, leading to p-hydoxybenzoate-decorated lignin. The discovery may enable scientists to engineer plants to accumulate more of this important industrial chemical building block.

Cell walls are made of a combination of chainlike polymers—cellulose, hemicellulose, and lignin—which are the major source of plant biomass. Liu and other scientists have been exploring the biochemical pathways that build up these plant polymers. One goal has been to understand how changing the mix of polymers could make it easier and more cost-effective to convert biomass into biofuels.

Lignin, which gives plants structural integrity, mechanical strength, and waterproofing, is particularly hard to break down. But recent research aimed at generating cellulosic ethanol has driven technical advances and opportunities to increase the uses and therefore the value of lignin.

Scientists have known that the building blocks that make up lignin often have various chemical groups, including pBA, attached as sidechains. The exact function of these side groups was unknown. But Liu’s team was interested in exploring their influence on lignin structure and properties. So, they set out to discover the enzyme responsible for attaching pBA to lignin.

Searching for the gene

The scientists conducted their study on poplar. This fast-growing tree species has rich woody biomass. It has emerged as a promising renewable feedstock for biofuel and bio-based chemical production. It also has pBA as the main sidechain “decoration” on its lignin.

To systematically identify and characterize the enzyme(s) involved in attaching pBA or other chemical groups to lignin, Liu’s team screened a series of candidate genes identified through a related genomic study of poplar.

“We cloned 20 candidate genes that are primarily expressed in woody tissues and encode enzymes called acyltransferases. These are the enzymes most likely involved in transferring chemical groups to the particular accepter molecules,” Liu said.

The scientists expressed the enzymes coded for by these genes and mixed each one with various building blocks including one isotope-labeled carbon compound. Tracing the isotope label and a range of other test-tube based biomolecular techniques allowed the scientists to monitor whether each candidate enzyme was involved in attaching sidechains such as pBA (or the other chemical groups). They were able to zero in on the most likely candidate for the reaction of interest.

Firmly proving the enzyme’s function in plants, however, was a formidable task. It took the scientists many years—and required the emergence of new advances in molecular biology.

One of those was a technique known as CRISPR/Cas9, a modern “genetic scissor” that permits precise editing of genes in the genome of a target organism. The team used CRISPR/Cas9 to generate a poplar variant in which the candidate enzyme-encoding gene had been deleted. Subsequent analysis found almost no pBA on the lignin in stems of these plants.

They also tried another genetic test by over-expressing the gene that produces the candidate enzyme. Those plants accumulated increased levels of pBA.

“Together these data provide conclusive proof that the gene/enzyme we have identified can attach pBA to the lignin building blocks,” Liu said.

Ramping up plants’ pBA content through genetic manipulation could be one way to sustainably produce p-hydroxybenzoic acid.

The scientists also found that lignin from plants that were engineered to accumulate lower pBA were easier to dissolve in a solvent. This implies that, in nature, pBA helps to strengthen lignin.

Therefore, another potential outcome of identifying the enzyme for adding pBA to lignin could be genetic strategies for tailoring the chemical properties of lignin.

Lowering pBA might improve the “delignification” of woody biomass for processes such as pulping, paper making, and biofuel production.

The research was performed in collaboration with Yuki Tobimatsu and Pui-Ying Lam at Kyoto University in Japan. The work at Brookhaven was funded by the DOE Office of Science (including through the Joint BioEnergy Institute, one of DOE’s Bioenergy Research Centers) and by Brookhaven’s Laboratory Directed Research and Development Program.