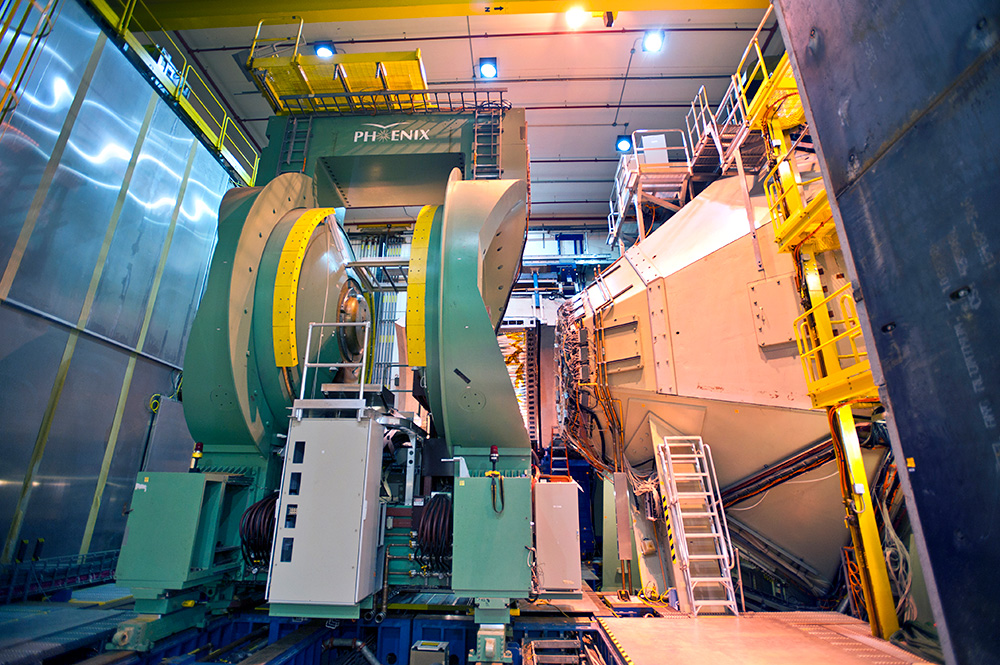 UPTON, NY—Scientists seeking to explore the teeming microcosm of quarks and gluons inside protons and neutrons report new data delivered by particles of light. The light particles, or photons, come directly from interactions of a quark in one proton colliding with a gluon in another at the Relativistic Heavy Ion Collider (RHIC). By tracking these “direct photons,” members of RHIC’s PHENIX Collaboration say they are getting a glimpse—albeit a blurry one—of gluons’ transverse motion within the building blocks of atomic nuclei.

“We show experimentally for the first time the potential that direct photon measurements are sensitive to the transverse motion of gluons and that we can use such measurements to start constraining things—to reduce the huge uncertainties in our knowledge of how gluons behave,” said Alexander Bazilevsky, deputy spokesperson of the PHENIX Collaboration and a physicist at the U.S. Department of Energy’s (DOE) Brookhaven National Laboratory.

The data, published in Physical Review Letters, come from collisions between beams of polarized protons at RHIC, a DOE Office of Science user facility for nuclear physics research located at Brookhaven Lab. RHIC is the only facility in the world capable of colliding protons with their spin directions aligned in a controlled way.

“RHIC’s spin polarization is a crucial requirement for this research. It gives us a way to establish which way is up so we can measure the motions of other particles relative to that reference direction,” explained Brookhaven Lab physicist Nicole Lewis, whose work on this analysis formed the basis of her Ph.D. thesis.

As Lewis explained in an invited talk at the 2021 Fall Meeting of the American Physical Society’s Division of Nuclear Physics on October 12, understanding the origin of proton spin is also one of the main research goals. 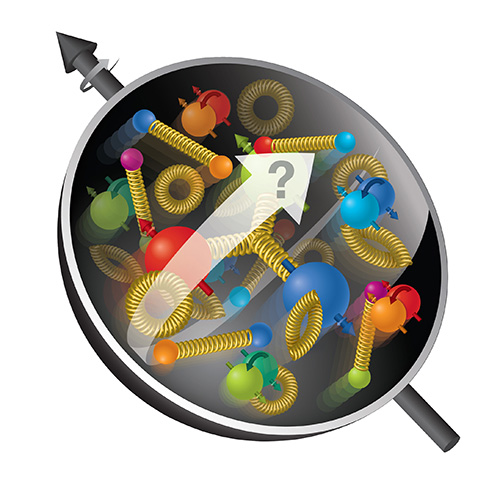 Newly analyzed data from the PHENIX detector at the Relativistic Heavy Ion Collider (RHIC) are offering insight into the internal structure of individual protons, which are made up of quarks (colored spheres) and gluons (yellow "springs"). The measurements have the potential to reveal whether the internal motion of the gluons (white arrow) aligns with and contributes to the overall spin of the proton (indicated by small gray arrow).

A proton’s spin, or intrinsic angular momentum, makes it act like a tiny bar magnet with two poles. This property is used every day in magnetic resonance imaging (MRI), where a powerful external magnet changes the alignment of protons’ spins in our bodies so doctors can see features inside. But where spin comes from is still a mystery.

Studies at RHIC and elsewhere show that quark spins and gluon spins both make substantial contributions to proton spin, but not enough. The motions of these fundamental particles within protons are expected to also play a role. Using direct photons to measure how gluons’ transverse motion is correlated with overall proton spin is expected to help solve this puzzle.

In addition, studying the motion of quarks and gluons within a proton will help reveal details of the interactions between these particles. Those interactions are governed by the strong nuclear force—the strongest force in nature—which is carried by gluons and binds the quarks within the protons and neutrons of atomic nuclei. So, studying gluons and the strong force is really about understanding the “glue” that binds visible matter—everything made of atoms.

The newly analyzed data from PHENIX reveal that direct photons can be used to study gluons’ motions inside a proton.

The PHENIX measurements are 50 times more precise than the only previously published direct photon data—about 30 years ago from an experiment at DOE’s Fermi National Accelerator Laboratory.

“Our results help to validate the use of this approach for future studies at RHIC—including at an upgraded sPHENIX detector currently being installed in the location of the original PHENIX detector, which ended its experimental run in 2016. sPHENIX is expected to be operational in 2023 and will have even better capabilities to detect direct photons,” Bazilevsky said.

The direct photon data from proton-proton collisions will also provide important cross-checking for experiments using electrons to probe the inner structure of protons at the future Electron-Ion Collider (EIC).

“Proton-proton and electron-proton collisions give us different, complementary ways to ‘see’ inside a proton to construct the final picture of how things look,” Bazilevsky said.

How to peer inside a proton 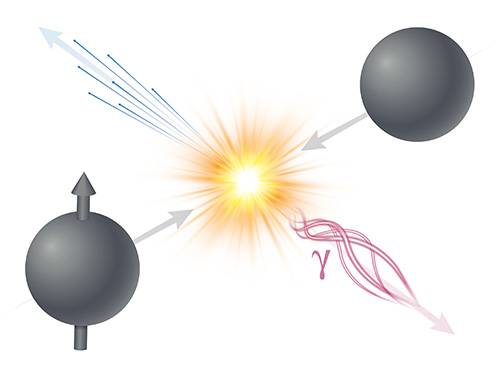 PHENIX physicists analyzed collisions of a proton polarized perpendicular to its direction of motion (pointing "up") with an unpolarized proton, searching for collisions that emitted "direct photons" (ϒ) back-to-back with jets of particles. The method works, but the scientists don't yet see a big difference in the number of direct photons emerging to the left or right of the "up" direction, which would indicate the internal transverse motion of the gluons. Future experiments at sPHENIX should provide a clearer picture.

But only one of those possible interactions—quark-gluon scattering—is a major source of photons (quantized particles of light) emitted directly from the collision zone. And because photons have no electric charge or “color” charge (the type of charge carried by quarks and gluons) they don’t interact with anything on their way out. By measuring these direct photons, scientists can zero in on the gluons involved in these interactions.

To tell whether the gluons are moving, the scientists align the spins in one proton beam transversely—that is, pointing “up” relative to their forward direction of motion. Then they measure whether there are more photons emerging to the left or the right of the forward-going proton’s up point of reference.

“The up is the spin, and the left or right gives you the momentum of the gluons in the transverse direction,” Lewis explained. That helps physicists expand beyond a one-dimensional view of quarks or gluons only moving in the same direction as the proton they are in.

“From this we are able to probe a more three-dimensional picture of the proton and study internal transverse dynamics of the quarks and gluons. If we were to measure a very large left to right asymmetry, that would indicate that there are large internal dynamics going on inside the proton, which would in turn contribute to the proton’s spin.” 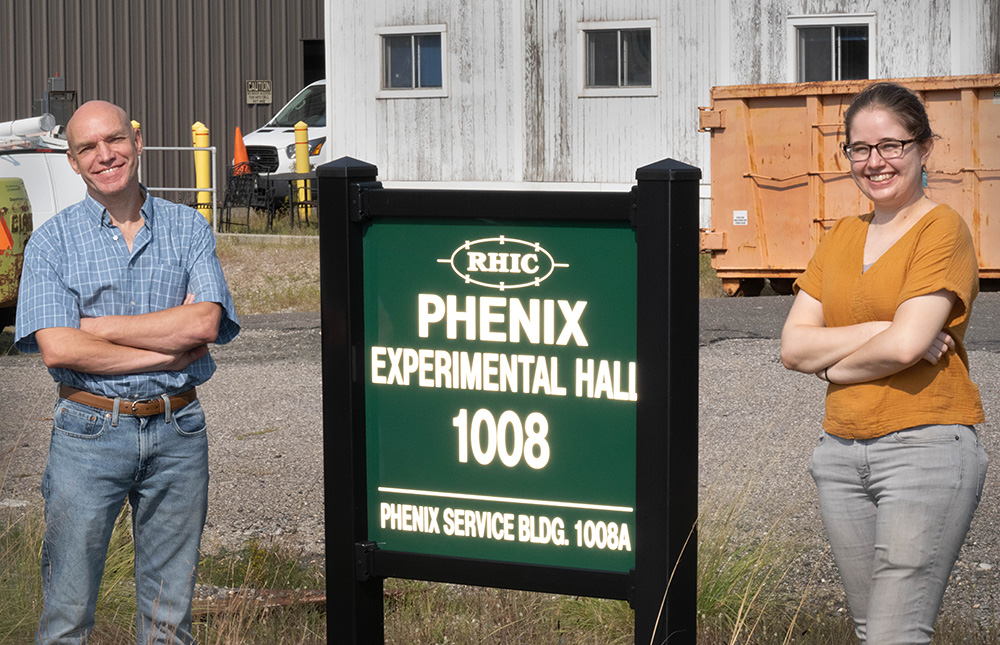 Figuring out which photons come directly from a quark-gluon interaction isn’t so simple.

“There are so many other photons present in these collisions that come from the decays of other particles or radiative processes,” Lewis said. “Trying to isolate the photons that came directly from the collision, that’s the hard part.”

The scientists use a process of elimination. If a photon picked up in the detector is surrounded by other particles with similar energy, it likely came from radiative processes that happened after the collision—so those photons are not direct. Likewise, if the energy and angles of a pair of photons can be reconstructed to have originated from the decay of a parent particle—a pi zero meson, say—then those photons are also not direct photons. After all the eliminations, the photons with no other obvious source are assumed to have originated from a quark-gluon scattering event.

“PHENIX has the resolution and other characteristics that enable it to do these measurements,” Bazilevsky said.

“Another reason why this is hard is because direct photon production is a pretty rare process,” said Lewis. “It doesn’t happen frequently, and it has a large background—which makes the signal hard to detect. We need many collisions to have enough occurrences to be able to do the analysis.”

Now for the first time, Bazilevsky said, “we show that a collider like RHIC can produce enough collisions for such measurements.”

But even with the detector and collider capabilities, the PHENIX results did not show an asymmetry in the number of direct photons emerging left or right of the transversely polarized proton. “We got something that was consistent with zero,” Lewis said.

But that does not mean that the gluons involved in these interactions were not moving, because the uncertainties in the measurements are still somewhat large.

“The models based on previous measurements give only a blurry picture,” Bazilevsky said. “Within the large uncertainties of these models, we show that direct photons are starting to be sensitive to gluon motions and reducing the uncertainties. So, our picture is still blurry, but we are zooming in a bit.”

“We are looking forward to the next step—building and using the sPHENIX detector, which will be able to track many more collisions and pick out direct photons emerging from wider angles around the collision zone. Then we may start to see something that’s not zero,” he said.

This research and RHIC operations are funded by the DOE Office of Science (NP). Additional funders are listed in the scientific paper.