The following news release was originally published by the U.S. Department of Energy’s Argonne National Laboratory. It describes a new theoretical approach for predicting the quark-gluon structure of a proton accelerated to near the speed of light, and mentions that such predications will be tested at the future Electron-Ion Collider being constructed at DOE’s Brookhaven National Laboratory. Yong Zhao, the Argonne Lab physicist who is lead author on the paper, was previously a postdoctoral fellow in the Nuclear Theory Group at Brookhaven.

Getting up to Speed on the Proton 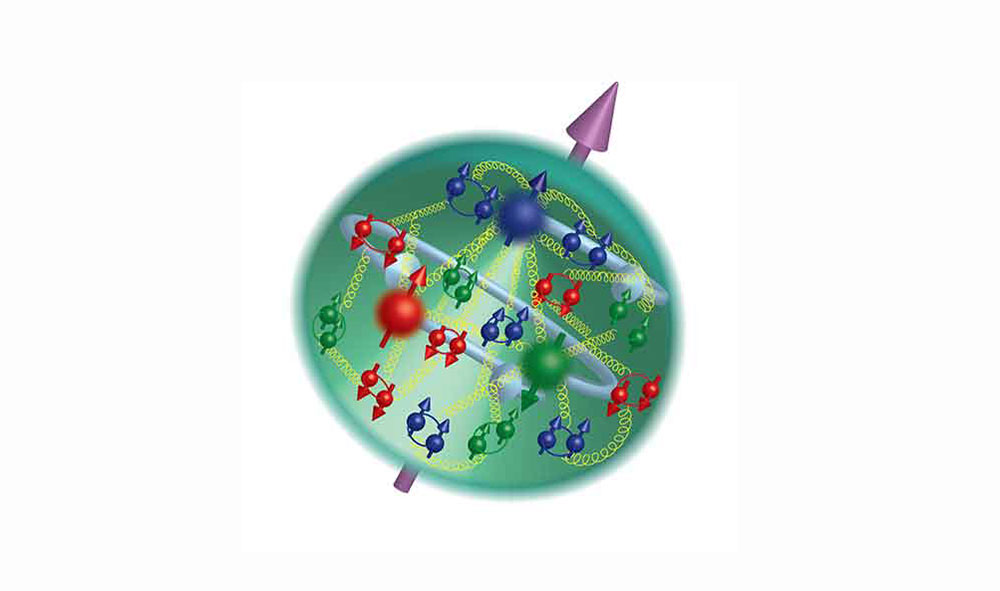 Artistic rendering of proton structure revealing its intricate and dynamic system of quarks and gluons. (Image by Argonne National Laboratory.)

For more than 2,000 years, scientists thought the atom was the smallest particle possible. Then, they discovered that it has a nucleus made up of protons and neutrons surrounded by electrons. After that, they found that the protons and neutrons themselves have a complex inner world full of quarks and antiquarks held together by a superglue-like force created by gluons.

“Protons along with neutrons constitute over 99 percent of the visible universe, meaning everything from galaxies and stars to us,” said Yong Zhao — a physicist at the U.S. Department of Energy’s (DOE) Argonne National Laboratory. ?“Yet, there is still much we do not know about the rich inner life of protons or neutrons.”

Zhao has co-authored a paper on an innovative method for calculating the quark and gluon structure of a proton travelling at the speed of light. The name of the team’s creation is large-momentum effective theory, LaMET for short, which works jointly with a theory called lattice quantum chromodynamics (QCD).

The proton is tiny — about 100,000 times smaller than an atom, so physicists often model it as a point with no dimensions. But these new theories can predict what’s happening within the speed-of-light proton as though it were a body of three dimensions.

The concept of momentum is vital to not only LaMET but physics in general. It equals the speed of an object times its mass.

More than a half century ago, Zhao explained, a simple quark model by physicists Murray Gell-Mann and George Zweig uncovered some of the inner structure of the proton while at rest (no momentum). From that model, scientists pictured the proton as consisting of three quarks and predicted their essential properties, such as electric charge and spin.

Later experiments with protons accelerated to close to the speed of light demonstrated that the proton is even more complex than originally thought. For example, it contains uncountable particles that interact with one another — not just three quarks bound by gluons. And the gluons can briefly turn into quark-antiquark pairs before they destroy each other and become a gluon again. Particle accelerators like that at DOE’s Fermi National Accelerator Laboratory produced most of these results.

“When you accelerate the proton and collide it with a target, that’s when the magic happens in terms of revealing its many mysteries,” Zhao said.

About five years after the simple quark model rocked the physics community, a model proposed by Richard Feynman pictured the proton travelling at near the speed of light as a beam carrying an infinite number of quarks and gluons moving in the same direction. He called these particles ?“partons.” His parton model has inspired physicists to define a set of quantities that describe the 3D proton structure. Researchers could then measure these quantities in experiments at particle accelerators.

Earlier calculations with the best available theory at the time (lattice QCD)  produced some illuminating details about the distribution of quarks and gluons in the proton. But they had a serious shortcoming: They could not accurately distinguish between fast- and slow-moving partons.

The difficulty was that lattice QCD could only calculate the properties of the proton that do not depend on its momentum. But applying Feynman’s parton model to lattice QCD requires knowing the properties of a proton with infinite momentum, which means that the proton particles must all be traveling at the speed of light. Partially filling that knowledge gap, LaMET provides a recipe for calculating the parton physics from lattice QCD for large but finite momentum.

“We have been developing and refining LaMET over the last eight years,” said Zhao. ?“Our paper summarizes this work.”

Running on supercomputers, lattice QCD calculations with LaMET are generating new and improved predictions about the structure of the speed-of-light proton. These predictions can then be put to the test in a new one-of-a-kind facility called the Electron-Ion Collider (EIC). This facility is being built at DOE’s Brookhaven National Laboratory.

“Our LaMET can also predict useful information about quantities that are extraordinarily difficult to measure,” said Zhao. ?“And with powerful enough supercomputers, in some cases, our predictions could even be more precise than possible to measure at the EIC.”

With deeper understanding of the 3D quark-gluon structure of matter using theory and EIC measurements, scientists are poised to reach a far more detailed picture of the proton. We will then be entering a new age of parton physics.