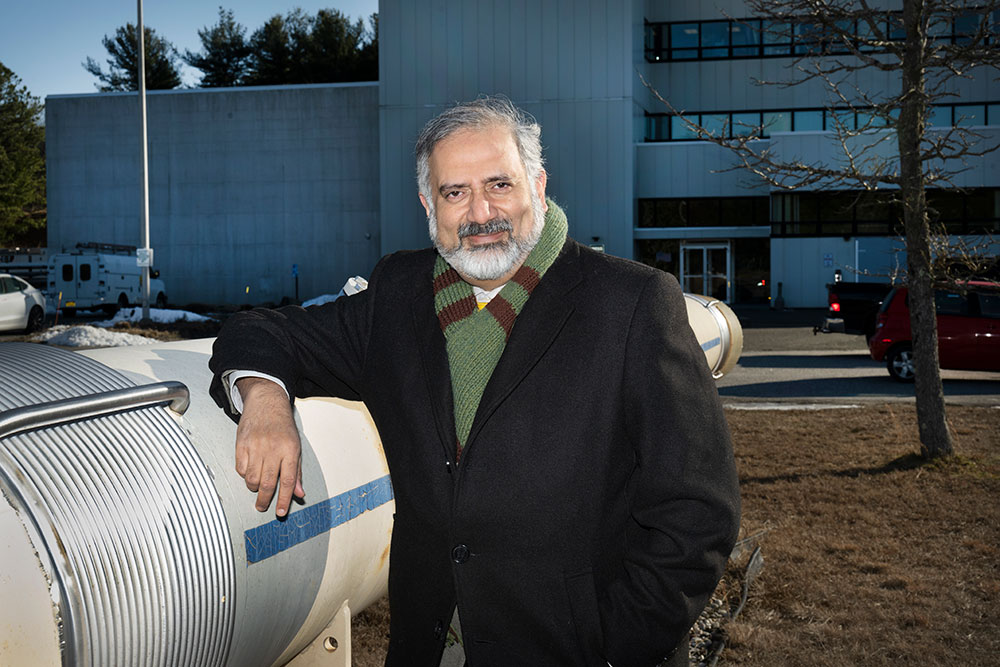 Abhay Deshpande, director of Electron-Ion Collider (EIC) science at Brookhaven National Laboratory and a physics professor at Stony Brook University, with a superconducting magnet like those that make up the Relativistic Heavy Ion Collider (RHIC) and parts of the future EIC.

UPTON, NY—Abhay Deshpande, director of Electron-Ion Collider science at the U.S. Department of Energy’s Brookhaven National Laboratory and a professor in the Department of Physics and Astronomy at Stony Brook University, has been named a 2021 Fellow of the American Association for the Advancement of Science (AAAS). Each year, AAAS bestows this honor on select members whose “efforts on behalf of the advancement of science, or its applications, are scientifically or socially distinguished.” New Fellows will be honored in an online ceremony during the AAAS annual meeting in Philadelphia, Pennsylvania, on Saturday, February 19, 2022.

AAAS is the world’s largest general scientific society and publisher of the Science family of journals. The tradition of naming Fellows stretches back to 1874. AAAS Fellows are a distinguished cadre of scientists, engineers, and innovators who have been recognized for their achievements across disciplines ranging from research, teaching, and technology, to administration in academia, industry, and government, to excellence in communicating and interpreting science to the public. Deshpande is one of 564 scientists, engineers, and innovators spanning 24 scientific disciplines who are being recognized as members of the 2021 class of AAAS Fellows.

Deshpande’s citation reads: “For key contributions to the determination of the spin composition of the nucleon, and for leadership in the development of the science program of the Electron Ion Collider.”

“I am honored to be recognized by the AAAS,” Deshpande said, “but fully aware that my contributions to nuclear physics would not have been possible without the many world-class collaborators I have been lucky to work with throughout my career. I am truly excited and energized to continue working with many of them—and many new ones—in the future at the Electron-Ion Collider.”

Deshpande has been a long-time collaborator on nuclear physics research at Brookhaven Lab’s Relativistic Heavy Ion Collider (RHIC), including using the unique capabilities of this DOE Office of Science user facility to unravel how particles called quarks and gluons contribute to the intrinsic angular momentum, or spin, of protons. (Protons and neutrons together are known as nucleons, the building blocks of atomic nuclei.) Deshpande’s research specifically helped determine the gluon contribution to proton spin from measurements taken using the PHENIX detector during collisions of polarized proton beams at RHIC.

Even while pursuing this ambitious research program, Deshpande has been a strong advocate for the future of nuclear physics research. He has been a central spokesperson for an effort to transform RHIC, at the completion of its scientific program, into an Electron-Ion Collider (EIC). The EIC, now in the planning stages at Brookhaven Lab, will solve remaining questions about proton spin and enable a deeper exploration of how nature’s strongest force binds quarks and gluons to build up the structure of the protons, neutrons, and nuclei that make up everything we see in the universe today.

Brookhaven Lab will build the facility in close collaboration with partners from Thomas Jefferson National Accelerator Laboratory and Deshpande has worked hard to foster that spirit of cooperation. He has helped to lay the plans for the accelerator and detector components that will be essential for advancing EIC science and has led programs to gain support from throughout the worldwide nuclear physics research community.

As director of EIC science for Brookhaven Lab, he has planned and participated in workshops and conferences around the world. He also spearheaded the establishment of the Center for Frontiers in Nuclear Science , a joint center between Brookhaven and Stony Brook University, serving as its founding director. CFNS hosts lectures, summer schools, and programs to engage young scientists—including students, postdoctoral fellows, and physicists around the world—helping to form collaborations of scientists currently proposing detector designs for capturing the most impactful science from the EIC.

“Abhay richly deserves this recognition as an AAAS Fellow, both for his extensive contributions to physics research over the years, and for his efforts in the development of a diverse and talented STEM [science, technology, engineering, and mathematics] workforce for the nation. We are very proud to have Abhay as a colleague at Brookhaven Lab,” said Haiyan Gao, Associate Laboratory Director for Nuclear and Particle Physics at Brookhaven.

Throughout his career, Deshpande has served both the U.S. and international scientific communities. In earlier work as a key member of the ZEUS Collaboration at the Deutsches Elektronen-Synchrotron (DESY) in Germany and the Spin Muon Collaboration at CERN, the European particle physics laboratory, he made crucially important contributions to measurements of nucleon structure functions and to determining quarks’ contribution to nucleon spin.

In addition to conducting research as part of these large international collaborations, Deshpande has made significant contributions to the accelerator and detector hardware that makes such research possible. As one example, he helped develop the polarimeters needed to measure the spin polarization of protons at RHIC. Deshpande also plays an important role connecting experimental nuclear physicists with theorists and promoting a fruitful collaboration among these two communities.

Deshpande is also a consummate teacher, joining Stony Brook University of the State University of New York (SUNY) as an Assistant Professor and RIKEN Fellow in 2004 and serving as a full Professor since 2013. In 2021 he was promoted to a SUNY Distinguished Professorship—the highest rank offered selectively amongst the SUNY faculty. Throughout these years, he has invested his considerable talents in educating the next generation of physicists. Many of his former students now play important roles at RHIC and other physics research facilities. He has lectured at schools all around the world, helping to inspire and attract a diverse group of young people to pursue careers in science. His educational and outreach efforts extend to a broader community through exciting talks for the general public and high-school students.

Abhay Deshpande earned his B.S. in physics from the University of Bombay in 1985, followed by a M.S from the Indian Institute of Technology, Kanpur, in 1987, and a Ph.D. in experimental high energy physics from Yale University in 1995. He was an Associate Research Scientist and Postdoctoral Fellow at Yale from 1995 to 1999 and a RIKEN BNL Research Center (RBRC) Fellow from 2000 to 2003. After joining Stony Brook University in 2004, he served as a senior fellow and group leader of the RBRC spin program from 2008 to 2017. In 2017 he joined Brookhaven Lab with a joint appointment as Director of Electron-Ion Collider Science. He has authored more than 400 scientific publications, given more than 500 talks, and received an array of honors and awards, including fellowship in the American Physical Society (2014), the RIKEN (Japan) President’s Special Prize for the Study of Nucleon Spin (2015), and the State University of New York (SUNY) Chancellor’s Award for Excellence in Research & Innovation (2018), and SUNY Distinguished Professorship in 2021.

RHIC and the EIC are funded by the DOE Office of Science.