The following news release announcing the top 300 scholars in the Regeneron Science Talent Search was issued by the Society for Science. The honorees include Lawrence Chai of Mount Sinai High School in New York, who conducted research as a virtual intern at the U.S. Department of Energy’s Brookhaven National Laboratory during the summers of 2020 and 2021. Chai worked with his mentor, Brookhaven Lab biologist Qun Liu, to optimize a computational data analysis workflow and used it to decipher the structures of previously unsolved proteins using the AlphaFold protein structure database. For more information about this project, contact Karen McNulty Walsh, kmcnulty@bnl.gov, 631-344-8350. 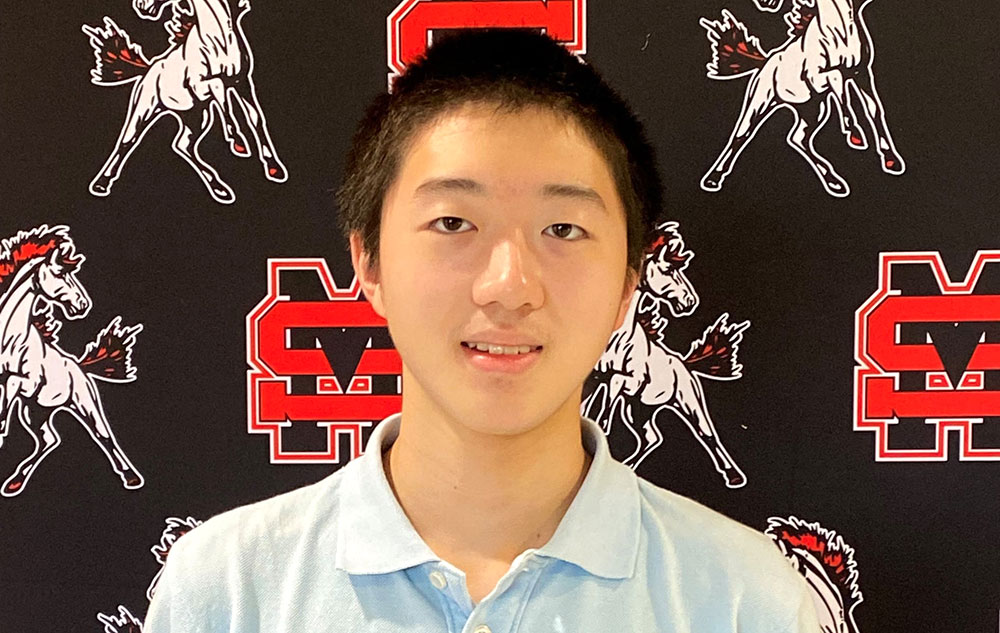 Lawrence Chai of Mount Sinai High School conducted research using a database to decipher protein structures as a virtual intern in the Biology Department at Brookhaven National Laboratory. He's been named one of the top 300 scholars in the Regeneron Science Talent Search.

WASHINGTON, D.C. (Jan. 6, 2022) – Society for Science (the Society) today announced the top 300 scholars in the Regeneron Science Talent Search 2022, the nation’s oldest and most prestigious science and math competition for high school seniors. The 300 scholars and their schools will be awarded $2,000 each.

The Regeneron Science Talent Search scholars were selected from 1,804 applications received from 603 high schools across 46 states, Washington, D.C., Puerto Rico and eight other countries. Scholars were chosen based on their exceptional research skills, commitment to academics, innovative thinking and promise as scientists as demonstrated through the submission of their original, independent research projects, essays and recommendation. The 300 scholars hail from 185 American and international high schools in 37 states, China, Switzerland, and Singapore, including three homeschools.

The full list of scholars can be viewed here: https://www.societyforscience.org/regeneron-sts/2022-scholars/

The Regeneron Science Talent Search provides students with a national stage to present original research and celebrates the hard work and novel discoveries of young scientists who are bringing a fresh perspective to significant global challenges. This year, research projects cover topics from tracking countries’ progress on Sustainable Development Goals to the impact of states’ individual COVID-19 responses, and improving the tools used to diagnose Alzheimer’s to analyzing the effects of virtual learning on education.

“Amid an unprecedented and ongoing global health crisis, we are incredibly inspired to see such an extraordinary group of young leaders who are using the power of STEM to solve the world’s most intractable challenges,” said Maya Ajmera, President and CEO of Society for Science, Publisher of Science News and 1985 Science Talent Search alum. “The ingenuity and creativity that each one of these scholars possesses has shown just how much intellectual curiosity and passion can thrive, even in difficult times.”

“Congratulations to this year’s 300 Regeneron Science Talent Search scholars for their remarkable contributions and discoveries in the STEM field,” said Christina Chan, Senior Vice President, Corporate Communications & Citizenship at Regeneron. “We are honored to celebrate this new generation of problem solvers who have demonstrated the depth of their innovative thinking, commitment to continuous learning, and ability to tackle global challenges in creative ways.”

On January 20, 40 of the 300 scholars will be named Regeneron Science Talent Search finalists. The finalists will then compete for more than $1.8 million in awards during a week-long competition taking place March 10-16.

About the Regeneron Science Talent Search

The Regeneron Science Talent Search, a program of Society for Science since 1942, is the nation’s oldest and most prestigious science and math competition for high school seniors. Each year, nearly 2,000 student entrants submit original research in critically important scientific fields of study and are judged by leading experts in their fields. Unique among high school competitions in the U.S. and around the world, the Regeneron Science Talent Search focuses on identifying, inspiring and engaging the nation’s most promising young scientists who are creating the ideas that could solve society’s most urgent challenges.

In 2017, Regeneron became only the third sponsor of the Science Talent Search as a way to help reward and celebrate the best and brightest young minds and encourage them to pursue careers in STEM as a way to positively impact the world. Through its 10-year, $100 million commitment, Regeneron nearly doubled the overall award distribution to $3.1 million annually, increasing the top award to $250,000 and doubling the awards for the top 300 scholars and their schools to $2,000 each to inspire more young people to engage in science.

About Society for Science

Society for Science is dedicated to the achievement of young scientists in independent research and to public engagement in science. Established in 1921, the Society is a nonprofit whose vision is to promote the understanding and appreciation of science and the vital role it plays in human advancement. Through its world-class competitions, including the Regeneron Science Talent Search, the Regeneron International Science and Engineering Fair, the Broadcom MASTERS, and its award-winning magazine, Science News and Science News for Students, Society for Science is committed to inform, educate, and inspire. Learn more at www.societyforscience.org and follow us on Facebook, Twitter, Instagram and Snapchat (Society4Science).