Scientists Nail Down 'Destination' for Protein That Delivers Zinc 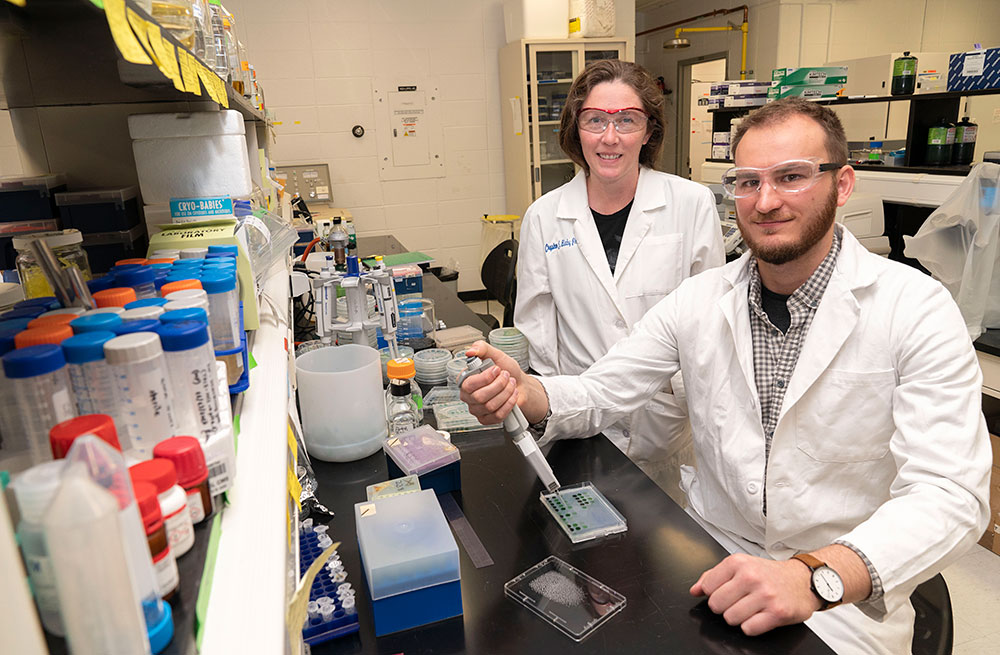 UPTON, NY—Most people don’t think much about zinc. But all living things need zinc for survival. This trace element helps many proteins fold into the right shapes to do their jobs. And in proteins known as enzymes, zinc helps catalyze chemical reactions—including many important for providing energy to cells. If zinc is absent, people, pets, and plants don’t thrive.

That’s one reason biologists at the U.S. Department of Energy’s Brookhaven National Laboratory are so interested in this element.

“We're looking for ways to grow bioenergy plants—either plants that produce biofuels or whose biomass can be converted into fuel—and doing it on land that is not suitable for growing food crops,” said Brookhaven Lab biologist Crysten Blaby, who also holds an adjunct appointment at Stony Brook University. “So, we’re interested in strategies nature uses to survive when zinc and other micronutrients are lacking.”

In a paper just published in the journal Cell Reports, Blaby and her colleagues describe one such strategy:  a so-called “chaperone” protein that delivers zinc to where it’s needed, which could be especially important when access to zinc is limited. Though scientists, including Blaby, have long suspected the existence of a zinc chaperone, the new research provides the first definitive evidence by identifying a “destination” for its deliveries.

Through a series of biochemical assays and genetics experiments, the team identified a zinc-dependent protein that cannot function properly without the chaperone. That protein, called MAP1, exists across species—from yeast and mice to plants and people. That means the findings have relevance not just for plants but also for health in humans, where zinc deficiency leads to growth and developmental impairments.

“Our goals are in bioenergy crop sustainability, but because the proteins we are studying are found nearly everywhere, our research has applications that are very broad,” Blaby said.

Tracing down a discovery 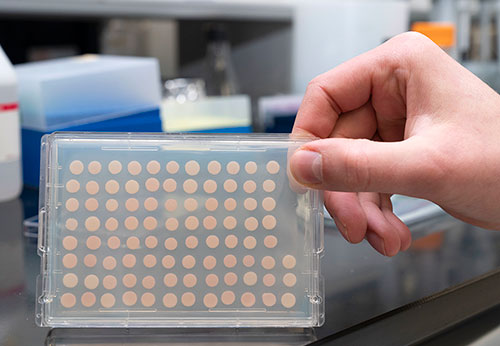 Closeup of a sample plate filled with yeast cell cultures used in these studies. These plates allow scientists to run experiments on many duplicate samples simultaneously to increase confidence in results.

Other trace metals, like nickel and copper, get shuttled around cells by chaperones because they can be toxic. The chaperones prevent the reactive metals from engaging in “unwanted associations.” Reactions between some trace metals and oxygen generate free radicals that are damaging to cells. But zinc doesn’t seem to have the propensity for such dangerous liaisons.

“Zinc is a relatively harmless metal ion. Since it doesn’t react with oxygen to create reactive oxygen species, we thought maybe it just diffuses to get where it needs to go without the need for a chaperone,” Blaby said. But that didn’t stop scientists from looking for one.

When Blaby was a graduate student at the University of Florida in the early 2000s, she worked with Professor Valérie de Crécy-Lagard, who first predicted that members of a protein family called CobW were the missing zinc chaperones. “My research as part of that group provided evidence that if one exists, it was probably a protein in this family. But to prove that it functions as a zinc chaperone, we needed to identify the destination—the protein it was delivering zinc to,” Blaby said.

Many groups worked on that challenge for years but still could not find and prove the purported chaperone’s target.

Fast-forward to when Blaby began building her research group at Brookhaven in 2016. While mining data on interactions among proteins that had been deposited in searchable databases over the past decade, she found evidence of an interaction between a protein in the purported zinc chaperone family and a protein called methionine aminopeptidase, or MAP1. And she found the interaction in both yeast and humans.

“Whenever you see a conserved protein interaction like that, in very different organisms, it usually means that it's important,” Blaby said.

MAP1, it turns out, modifies many proteins in the cell—across almost all species. If MAP1 isn’t working, unmodified proteins have problems. And MAP1 depends on zinc to function.

“The pieces were starting to come together,” said Blaby. “Then the real fun started—which was to test our very specific hypothesis:  that this protein we’ve come to call ZNG1 (pronounced zing 1) is the chaperone that delivers zinc to MAP1.”

Blaby worked with Brookhaven postdocs Miriam Pasquini and Nicolas Grosjean, who designed and ran a series of experiments to nail the case. The two share first authorship on the paper.

“This was a really great team to bring together to do both the in vivo and in vitro work needed to finally provide experimental evidence for the function of these proteins,” Blaby said.

Proof is in the flask

First, using fast-growing yeast cells, Grosjean knocked out the gene that tells cells how to make ZNG1. If this protein is the chaperone that delivers zinc to MAP1, then MAP1 shouldn’t function properly in the knockout cells.

“We’re interested in strategies nature uses to survive when zinc and other micronutrients are lacking.”

And when zinc is lacking in the environment, the defect in MAP1 function should get worse.

“When a lot of proteins are competing for limited zinc, that’s a situation where, if there’s a chaperone, it might help choose which of the many zinc-dependent proteins should get this precious resource,” Grosjean explained. In other words, when zinc is limited, the chaperone’s absence should be felt more.

The results came out just as expected:  Cells without the gene for ZNG1 had defects in MAP1 activity, and the level of defect increased in the low-zinc environment.

Next, Pasquini led a project to purify the two proteins—ZNG1 and MAP1—in isolation. First, she showed that when no zinc is present, as expected, MAP1 by itself doesn’t work.

Then she mixed MAP1 with ZNG1 that had been loaded with zinc. But again, there was no MAP1 activity. The scientists reasoned that something else must be missing. 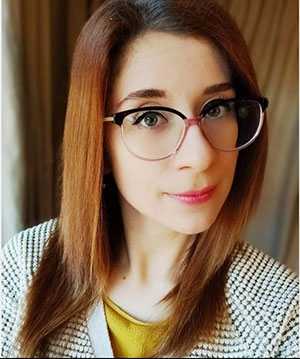 Through a series of experiments, they demonstrated that ZNG1 needs to be activated to deliver its zinc cargo. That activation comes from an energy molecule known as GTP.

“What we think happens is that the chaperone binds GTP and has a certain conformation, or shape,” Pasquini said. “When it releases the energy from GTP, it changes shape. We think that conformational change could be important for binding and releasing zinc.”

When Pasquini added GTP to the mix of zinc-loaded ZNG1 and MAP1, she finally observed MAP1 activity.

“It’s only after you add the energy molecule that you see evidence of zinc being transferred to MAP1,” she said.

Together these experiments provided the evidence that the long-suspected protein now known as ZNG1 operates as a chaperone to deliver zinc to MAP1.

The team also collaborated with scientists in the Environmental Molecular Sciences Laboratory, a DOE Office of Science user facility at Pacific Northwest National Laboratory, on larger scale “proteomics” experiments. And they worked with Estella Yee at Brookhaven Lab’s National Synchrotron Light Source II (NSLS-II), another DOE Office of Science user facility, on computational modeling studies to understand the protein complex that forms between the zinc chaperone and MAP1.

“Our in vivo and in vitro experiments were looking at just a couple of players. What proteomics allowed us to do was to see how deleting the zinc transferase gene affects all the proteins—and study the impact those players have on the rest of the cell and organism,” Blaby said.

One of the major impacts is that cells can no longer adapt to low levels of zinc.

“Cells have evolved so that when zinc concentrations get too low, a group of genes turns on to respond to this change of circumstances. But when you get rid of ZNG1, many of those genes stay turned off,” Blaby said.

“We are now building upon this foundational work completed in the fast-growing yeast model organism to understand how these proteins and their functions are conserved in bioenergy crops,” Blaby said. “This work shines a light on a previously unknown strategy that plants use to thrive when zinc is limiting in the soil. Understanding such strategies may help us devise ways to optimize crop productivity and achieve environmentally sustainable bioenergy.”

Pasquini added, “The possibility for plants to acquire resilience in low-zinc soils also means that we would be able to exploit non-arable land for growing bioenergy crops, leaving fertile soils dedicated to other agricultural purposes. Pushing plant cells to produce more ZNG1 would conceivably enable superior growth on marginal lands depleted in zinc.”

This research was supported by the DOE Office of Science (BER) as part of the Quantitative Plant Science Initiative at Brookhaven National Laboratory and by Laboratory Directed Research and Development (LDRD) funds.