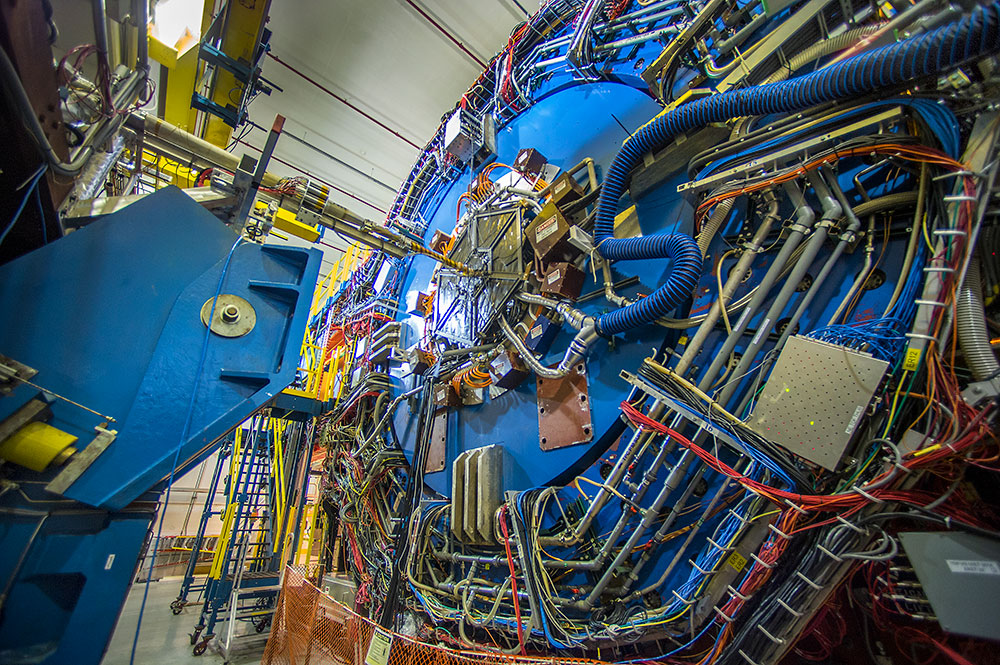 Scientists used the STAR detector at the Relativistic Heavy Ion Collider (RHIC), shown here, to track how certain jets of particles lose energy in the quark-gluon plasma (QGP) created when the nuclei of gold atoms collide in the center of the detector.

UPTON, NY—Scientists studying particle collisions at the Relativistic Heavy Ion Collider (RHIC) have revealed how certain particle-jets lose energy as they traverse the unique form of nuclear matter created in these collisions. The results, published in Physical Review C, should help them learn about key “transport properties” of this hot particle soup, known as a quark-gluon plasma (QGP).

“By looking at how jets of particles slow down as they move through the QGP, we can learn about its properties the same way studying how objects move through water can tell you something about its density and viscosity,” said Raghav Kunnawalkam Elayavalli, a postdoctoral fellow at Yale University and member of RHIC’s STAR experiment collaboration.

But there are multiple ways a jet can lose energy—or be “quenched.” So, it can be hard to tell which of those causes is creating the quenching effect.

"By looking at how jets of particles slow down as they move through the QGP, we can learn about its properties.”

With the new findings, for the first time, STAR has identified a specific population of jets for which the physicists say they can distinctively identify the mechanism: individual quarks emitting gluons as they interact with the QGP.

Theorists may now use the data to refine their calculations describing fundamental properties of the hot quark soup.

“Jets are very useful because they tell you how these quarks interact with themselves,” said Kolja Kauder, another principal author on the analysis, who is a physicist at the U.S. Department of Energy’s Brookhaven National Laboratory, where RHIC is located. “This is the essence of ‘quantum chromodynamics’—the theory describing the nuclear strong force interactions of quarks and gluons. We are learning more about that fundamental force of nature by studying how these jets get quenched.”

The strong force plays a major role in building up the structure of everything we see in the universe today. That’s because all visible matter is made of atoms with protons and neutrons at their core. Those particles, in turn, are made up of quarks, which are held together by the exchange of strong force carrier particles—the gluelike gluons.

But quarks weren’t always bound together. Scientists believe quarks and gluons roamed free very early in the universe, a mere microsecond after the Big Bang, before the primordial soup of matter’s fundamental building blocks cooled enough for protons and neutrons to form. RHIC, a U.S. Department of Energy Office of Science user facility for nuclear physics research, was built to recreate and study this quark-gluon plasma.

Collisions of heavy ions (the nuclei of atoms) at the Relativistic Heavy Ion Collider (RHIC) recreate matter as it existed just after the Big Bang nearly 14 billion years ago. The collisions "set free" the quarks and gluons that make up the protons and neutrons of the nuclei. The result is a hot soup of these fundamental particles, a quark-gluon plasma (QGP).

RHIC recreates the early-universe quark soup by steering the nuclei of heavy atoms such as gold into head-on collisions at nearly the speed of light. The energy released creates thousands of new subatomic particles, including quarks (remember energy can create mass and vice versa through the famous equation E=mc2). It also “melts” the boundaries of the individual protons and neutrons to set the internal quarks and gluons free.

Scientists have been tracking how different types of particles stream through the resulting quark-gluon plasma for more than two decades. These include collimated sprays, or jets, of particles that result from the fragmentation of a quark or gluon. The scientists have generally found that high momentum particles and jets lose energy when they traverse the blob of hot QGP. Through this new study they’ve identified details of a specific mechanism for jet quenching in one subset of jets.

This study specifically focused on jets of particles produced back-to-back (called dijets), where one jet close to the surface of the QGP blob easily escapes with lots of energy, while the recoil jet traveling a longer route in the opposite direction gets quenched by the plasma. STAR physicists tracked the energy of particles making up the “cone” of the recoil jet. Comparing that with the energy of the escaped (or “trigger”) jet tells them how much energy was lost.

“Our intuition tells us that something wider moving through the medium should lose more energy,” Kunnawalkam Elayavalli said. “If the jet is narrow, it can sort of punch through and you’d expect less energy loss than for a wider jet, which sees more of the plasma. That was the expectation.”

Think about a large swimmer moving through the water in a non-streamlined way, he suggested. You’d expect to see a wider wake moving farther from the person than the wake of a slim, streamlined swimmer. In the case of the particles, the physicists were expecting the wider “wake” produced by wider jets to push particles out beyond the limits of their detection.

“But what we found is that, with this particular subset of jets that we studied at RHIC, it doesn’t matter what the opening angle of the jet is; they all lose energy the same way.” 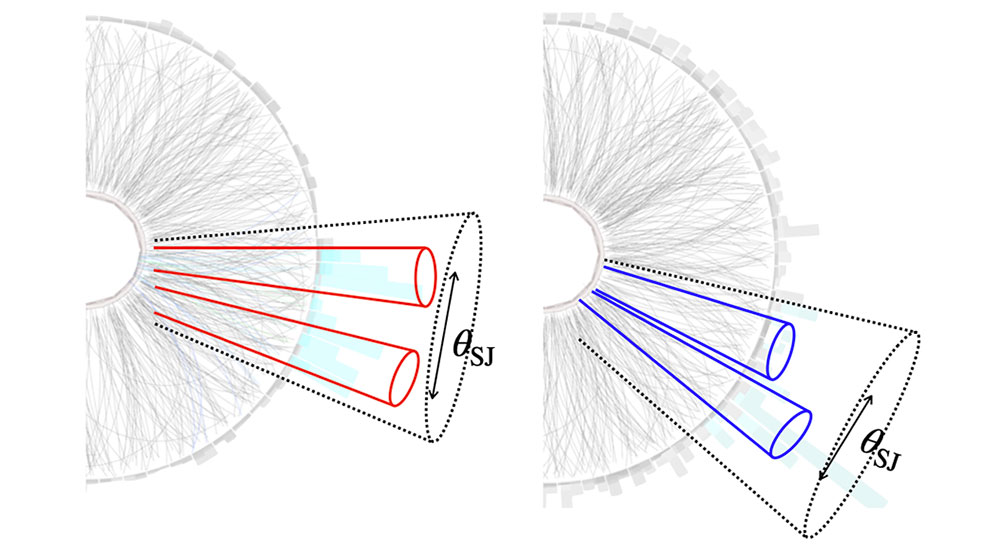 In both wide (red) and narrow (blue) jets tracked by the STAR detector, the energy of high- and low-momentum particles within the jet cone (θSJ) accounts for all the energy "lost" to quenching. This means quenching happens before the quark fragments to form the jet substructure.

“When the jets lose energy, that lost energy is converted into lower-momentum particles. You cannot just lose energy; it has to be conserved,” Brookhaven’s Kauder said. The surprise was that all the energy stayed within the cone.

The results have important implications for understanding when the quenching happens for these jets.

“Not seeing a difference between the wide and narrow jets means the mechanism of energy loss is independent of the substructure of the jet. The energy loss must have happened before the jets split—before there was an opening angle, narrow or wide,” Kunnawalkam Elayavalli said. 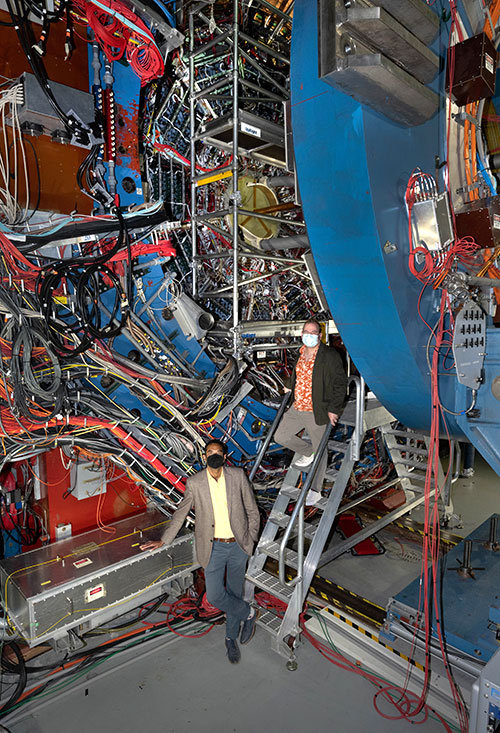 The most likely sequence of events: “Probably a single quark traversing the plasma radiated gluons (gave off energy) as it interacted with other quarks in the QGP, then it split to produce the jet substructure. The gluons turn into other lower momentum particles that stay within the cone, and those are the particles we measure,” he said.

If the energy loss happened after the jet split, each particle making up the jet substructure would have lost energy, with a greater probability that particles would spread beyond the jet cone—in other words, forming a “wake” beyond the area where the physicists could measure them.

Knowing the specific mechanism of energy loss for these jets will help theorists refine their calculations of how the energy loss relates to the QGP transport properties—properties that are somewhat analogous to the viscosity and density of water. It will also give physicists a way to understand more about the fundamental strong force interactions between quarks.

“Gaining a quantitative understanding of the properties of this plasma is paramount to studying the evolution of the early universe,” Kunnawalkam Elayavalli said, “including how that primordial soup of particles became the protons and neutrons of the nuclei of atoms that make up our world today.

“This measurement essentially starts the next era of jet physics at RHIC, which will allow us to differentially study the space-time evolution of the QGP.”

Raghav Kunnawalkam Elayavalli began this analysis as a postdoctoral fellow at Wayne State University working with Kauder (who later left Wayne State to join Brookhaven) and Wayne State physicist Joern Putschke, another principal author on the analysis. He completed the analysis during his current position at Yale/Brookhaven Lab with Yale physicist Helen Caines and Brookhaven Lab physicist Lijuan Ruan—the two co-spokespersons for the STAR Collaboration—and will begin a faculty appointment at Vanderbilt University this summer.

This research was supported by the DOE Office of Science (NP), which also supports RHIC operations, and by the U.S. National Science Foundation and a range of international agencies spelled out in the scientific paper. The STAR collaboration used computing resources in the RHIC & ATLAS Computing Facility at Brookhaven Lab; the National Energy Research Scientific Computing Center (NERSC), a DOE Office of Science user facility at Lawrence Berkeley National Laboratory; and the Open Science Grid consortium.