The reaction yields useful products from waste methane and carbon dioxide, both greenhouse gases, and may open up a path to transforming sustainable carbon chemistry 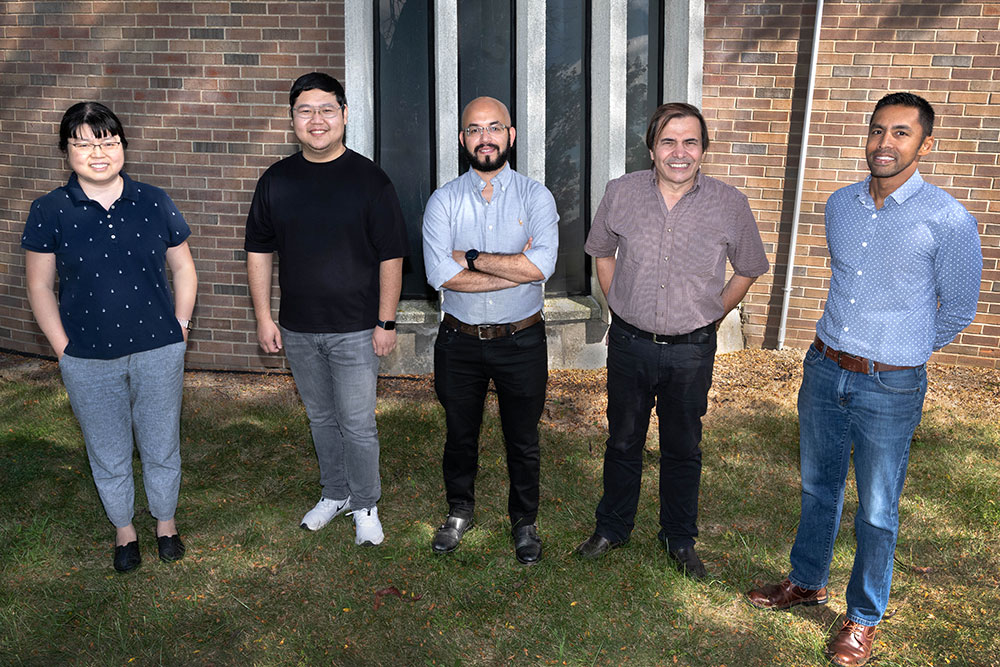 UPTON, NY—A team of researchers led by scientists from the U.S. Department of Energy’s (DOE) Brookhaven National Laboratory has discovered the mechanisms behind a very effective catalyst for methane dry reforming, a chemical reaction in which two greenhouse gases, methane and carbon dioxide, are simultaneously converted into a mixture of hydrogen molecules and carbon monoxide. This mixture is generally called synthesis gas or “syngas” because it is used for the preparation of high-value chemicals and fuels.

Methane and carbon dioxide are released into the atmosphere by several sources, including landfills and natural gas processing plants (methane is a key component of natural gas). Therefore, methane dry reforming offers a pathway for generating valuable chemicals from syngas while reducing the emission of two potent carbon-based greenhouse gases. This necessitates the use of industrially relevant catalysts that can assist with more than one reaction and, at the molecular level, have active sites that can enable complex chemistries.

The catalyst studied here is one such example. It is composed of palladium (Pd), cerium (Ce), and oxygen (O), where the Ce and O take the form of cerium oxide, CeO2. CeO2 has a molecular structure that easily incorporates clusters of palladium atoms; this interaction between the CeO2 and the palladium, which is driven by a mechanical process called “ball milling,” is essential to the catalyst’s success. 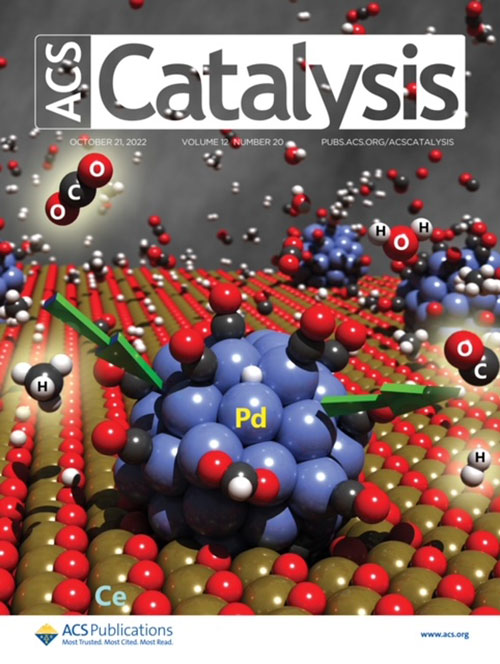 The ACS Catalysis cover, featuring a graphic of the group's work

Ball milling, also called mechano-chemical synthesis, is a dry approach to making highly active and selective catalyst powders. It eliminates the drawbacks of standard wet chemistry methods, such as solvent separation, which is expensive and energy-intensive. This key advantage has sparked a renewed interest in ball milling, which could be used to make a host of unique and highly active catalysts.

“Wet chemistry materials synthesis is often more energy-intensive from start to finish. For example, you might have to boil off water or solvent at the end, which requires a lot of energy. Ball milling completely avoids this,” said the study’s lead author, Brookhaven chemist Juan Jiménez, who received Brookhaven’s Goldhaber Distinguished Fellowship in 2021 to pursue innovative ways to utilize methane to produce valuable chemicals.

“One major advantage of mechano-chemical synthesis is its potential to be scaled up and expanded to the industrial level,” added Brookhaven chemist Sanjaya Senanayake, who led the study. “As researchers at a DOE national laboratory, we are interested in work that can help improve our country’s energy infrastructure. This reaction is one way of doing that: the conversion of greenhouse gases into useful chemicals and materials to avoid emission into the atmosphere is a major focus for carbon-negative strategies, such as DOE’s Carbon Negative Shot.”

The “Carbon-Negative Shot” is one of the six thrusts of the DOE Energy Earthshots Initiative, a broad program to address climate change by accelerating breakthroughs in sustainable clean-energy solutions.

Jiménez and his colleagues think the ball milling catalyst synthesis approach could be applied much more broadly in industry. It may even significantly change the field of “green” chemistry, which aims to design chemicals and processes that reduce or eliminate the use or generation of hazardous substances.

“This may be the beginning of a shift in how we think of sustainable chemistry,” he said.

The group’s work is published in the October 7, 2022, online edition of ACS Catalysis and is also featured on the journal’s cover.

Watching the catalyst at work 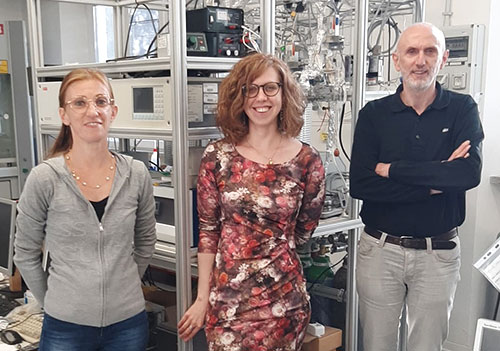 The study's collaborators from the University of Udine (Italy), from left: Sara Colussi, Maila Danielis, and Alessandro Trovarelli

The synchrotron x-ray techniques—performed “in situ,” meaning in the reaction environment and in real time—allowed the researchers to study the changing atomic structure of the catalyst as it interacted with the reacting gases. To do this, they used a device called a flow cell, which holds the catalyst sample while the methane/carbon dioxide mixture is passed over it. They then heated the cell to temperatures as high as 700 degrees Celsius (about 1300 degrees Fahrenheit), which is near the experimental limits of the in situ technique.

The results showed that the primary player in the catalysis process is the palladium, although the cerium oxide component provides a critical supporting role. The palladium atoms, clustered into nanoparticles, deposit themselves on the CeO2 surface and bind to oxygen atoms. This allows the Pd nanoparticles to be more strongly anchored to and disperse more evenly on the CeO2 surface. When the methane (CH4) interacts with the nanoparticles, it dissociates into hydrogen molecules (H2) and carbon (C). This results in a hydrogen-rich environment. Each carbon atom can then pick up an oxygen atom (becoming oxidized), turning into carbon monoxide (CO). This can happen in one of two ways. The first is by taking oxygen from the nearby CeO2. The second way is critical because it starts the dry reforming reaction: The carbon is oxidized by way of the CO2 gas, which dissociates into carbon monoxide and oxygen when it passes over the catalyst.

These findings were experimentally observed with unprecedented clarity using in situ infrared spectroscopy to follow each individual reactant molecule in action.

The researchers also found that the reaction has an unexpected intermediate product, CO bound to Pd atoms, which results from the direct oxidation of the methane. Its presence could be a benchmark that helps indicate the effectiveness of other mechano-chemical catalytic reactions. The group is exploring how to use this study as a model for re-examining the catalysis of other chemical systems and finding innovative ways to utilize the unique chemistry of mechano-chemical catalysts for more challenging reaction systems.

This international, multi-institutional collaboration includes scientists from the University of Udine (Italy), Stony Brook University, Argonne National Laboratory, and the Universitat Politécnica de Catalunya (Spain). The experimental efforts at Udine were led by Maila Danielis, one of the three recipients of the inaugural 2021 Joanna Fowler Award in the Chemical and Biological Sciences. These results were supported and confirmed by other research techniques, including electron microscopy imaging, theoretical calculations led by Brookhaven chemist Ping Liu and her student Hong Zhang, and laboratory-based x-ray studies in Brookhaven’s Chemistry Department.