Celebrating 'Tennis for Two' With A Video Game Extravaganza 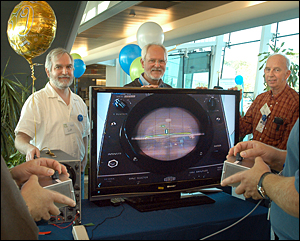 "Tennis for Two," one of the world's first video games, was introduced to the public on October 18, 1958 at a BNL annual visitors' day. Invented by BNL nuclear physicist William Higinbotham to "liven up the place" and "convey the message that our scientific endeavors have relevance in society," the game was a big hit with visitors, who stood on a long line to play it. Two players would compete to hit the "ball," a bouncing dot, over the "net," a horizontal line, which they viewed on an oscilloscope with a five-inch screen.

On October 24, BNL's Instrumentation Division and Media & Communications Office held a celebration to honor the fiftieth anniversary of Tennis for Two. At the time of its invention, the game was considered unimportant compared to the more serious work in the Instrumentation Division. Never patented, the game was dismantled about a year after its public display and, later, its original parts were discarded. No one guessed at the time that Tennis for Two would be an important piece of history - the forerunner to a multi-billion dollar industry that is still thriving today. While its recognition as the first video game has been contested, it was the first to be created just to be used for fun. 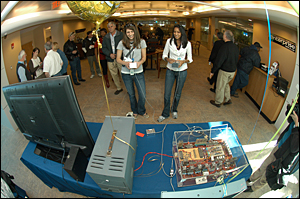 Two BNLers play Tennis for Two on the 5-inch oscilloscope; onlookers can watch the game on a larger television.

Nearly 200 people attended last week's anniversary celebration, and many of the visitors enjoyed playing a recreated version of Tennis for Two, rebuilt by the Instrumentation Division's Peter Takacs, Gene Von Achen and Paul O'Connor, with Scott Coburn, Condensed Matter Physics & Materials Science Department. In addition, more modern games were on display for people to try out, including Atari 2600, Sega Genesis, the original Nintendo (1985) and the current Nintendo Wii. Visitors were also invited to attend a tour of the Instrumentation Division to learn about the technological marvels that are created there nowadays.

"We decided to rebuild Tennis for Two about eleven years ago, in preparation for BNL's fiftieth anniversary," Takacs said. Using Higinbotham's original plans, Takacs and his colleagues rebuilt the game with vintage parts, including mechanical relays and germanium transistors that first became commercially available in the 1950s. The original 1950s model analog computer that was made from vacuum tube circuits had to be simulated using modern integrated circuit chips. 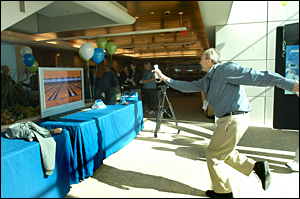 BNL's George Goode winds up for a strike while bowling on the Nintendo Wii.

"It took us about three-quarters of a year to rebuild it," Takacs added. "It was difficult to find the parts, then difficult to put them together. In contrast, it took Willy Higinbotham only two weeks to put it together and get it going."

The game held up well for about the first two hours of last week's celebration, then a spark went off in the inner workings of the game, and the horizontal line for the "court" on the screen disappeared. Takacs immediately looked at copies of the game's original plans, which were on display, interrupted a tour in Instrumentation, and with the help of colleagues Paul O'Connor, who found the necessary part - an oscillator chip - and Von Achen, who cut out the damaged chip and soldered in the new one, got the game working again within 25 minutes. 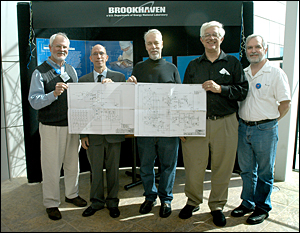 "Because it's an analog computer, I could quickly identify the part that we needed and replace it easily," Takacs said. "If one of today's video games broke down, that would not be the case. The electronics are very complicated. It would have to be sent back to the factory."

Fortunately, none of the other games broke down, and they were well used. But the game that attracted the most people was Tennis for Two, and playing it still held their interest, just as it did for BNL visitors 50 years ago.

For more information on Tennis for Two and William Higinbotham, click here.