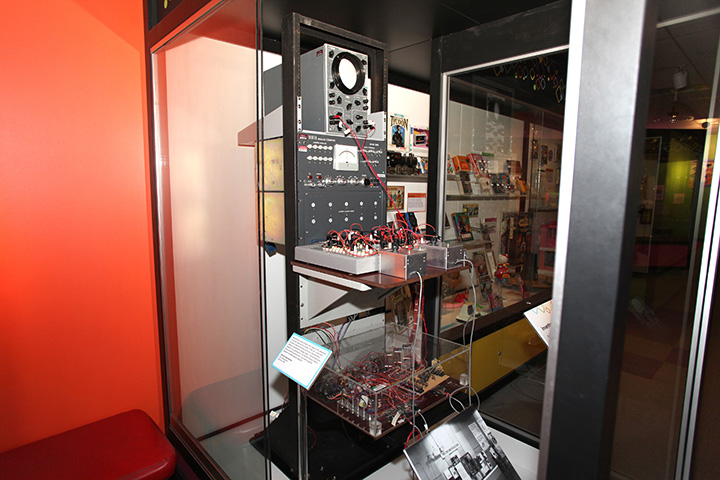 A re-creation of Willy Higinbotham's "Tennis for Two" is currently on display as part of the eGame Revolution exhibit at The Strong Museum® of Play in Rochester, New York. The Tennis for Two exhibit is expected to run through August 2017. (Photo Courtesy of The Strong®)

In 1958, Brookhaven Lab physicist William “Willy” Higinbotham came up with one of his brilliant ideas. The atoms-for-peace scientist, who wished to be known for his work on radar displays and his efforts to slow the nuclear arms race, set up an oscilloscope screen using a cathode-ray tube (similar to the black and white television tubes used at that time) that allowed a two-dimensional side view of a “tennis court” with a “bouncing” ball. It also used germanium transistors that had only become widely used in the 1950s. Players could use controllers and rotate dials to “swing” the invisible tennis racquet in an attempt to hit the simulated bouncing ball across the net. On display at Brookhaven Lab on that visitor’s day in 1958, the exhibit drew hundreds of people who waited in line for a chance to play the new electronic game. Every day since then, the game has held its place in history and is credited as leading to Pac-Man, Super Mario Brothers, and other well-known video games.

Recognizing its importance and colorful history, The Strong® Museum of Play in Rochester, New York, has included “Tennis for Two” in their permanent eGameRevolution exhibit. The Strong® is a highly interactive, collections-based museum devoted to the history and exploration of play. It is one of the largest history museums in the United States. It houses the world’s most comprehensive collection of materials related to play and is home to the International Center for the History of Electronic Games, the National Toy Hall of Fame, the World Video Game Hall of Fame, just to name a few.

“It’s no surprise to me that our re-creation of Willy’s game found its way to The Strong®,” said Peter Takacs of the Lab’s Instrumentation Division, who has spent countless hours rebuilding components of the game and researching its history in great detail. “This was more than just a game,’” he said. “It was a remarkable exhibit that connected science to society. Its place in history is well-deserved.”