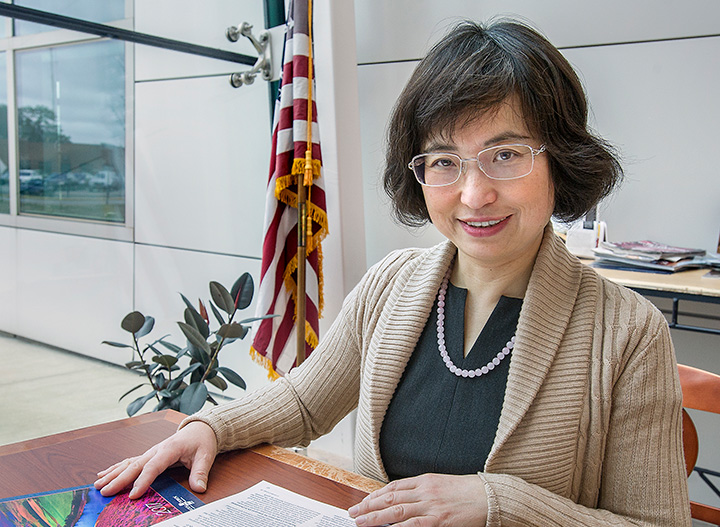 Very often there are people behind the scenes of scientific advances, quietly organizing the project’s logistics. New facilities and big collaborations require people to create schedules, manage resources, and communicate among teams. The U.S. Department of Energy’s Brookhaven National Laboratory is lucky to have Xiaofeng Guo in its ranks—a skilled project manager who coordinates projects reaching across the U.S. and around the world.

Guo, who has a Ph.D. in theoretical physics from Iowa State University, is currently deputy manager for the U.S. role in two upgrades to the ATLAS detector, one of two detectors at CERN’s Large Hadron Collider that found the Higgs boson in 2012. Brookhaven is the host laboratory for both U.S. ATLAS Phase I and High Luminosity LHC (HL-LHC) upgrade projects, which involve hundreds of millions of dollars and 46 institutions across the nation. The upgrades are complex international endeavors that will allow the detector to make use of the LHC’s ramped up particle collision rates. Guo keeps both the capital and the teams on track.

“I’m in charge of all business processes, project finance, contracts with institutions, baseline plan reports, progress reports—all aspects of business functions in the U.S. project team. It keeps me very busy,” she laughed. “In the beginning I was thinking ‘in my spare time I can still read physics papers, do my own calculations’… And now I have no spare time!”

Guo’s dual interest in physics and management developed early in her career.

“When I was an undergraduate there was a period when I actually signed up for a double major, with classes in finance and economics in addition to physics,” Guo recalled. “I’m happy to explore different things!”

Later, while teaching physics part-time at Iowa State University, Guo desired career flexibility and studied to be a Chartered Financial Analyst. She passed all required exams in just two years but decided to continue her research after receiving a grant from the National Science Foundation.

Guo joined Brookhaven Lab in 2010 to fill a need for project management in Nuclear and Particle Physics (NPP). The position offered her a way to learn new skills while staying up-to-date on the physics world.

Early in her time at Brookhaven, Guo participated in the management of the Heavy Flavor Tracker (HFT) upgrade to the STAR particle detector at the Relativistic Heavy Ion Collider (RHIC), a DOE Office of Science User Facility for nuclear physics research. The project was successfully completed  $600,000 under budget and a whole year ahead of schedule.

“This was a very good learning experience for me. I participated in all the manager meeting discussions, updated the review documents, and helped them handle some contracts. Through this process I learned all the DOE project rules,” Guo said.

While working on the HFT upgrade, Guo also helped develop successful, large group proposals for increased computational resources in high-energy physics and other fields of science. She joined the ATLAS Upgrade projects after receiving her Project Management Certification, and her physics and finance background as well as experience with large collaborations have enabled her to orchestrate complex planning efforts.

For the two phases of the U.S. ATLAS upgrade, Guo directly coordinates more than 140 scientists, engineers, and finance personnel, and oversees all business processes, including finance, contracts, and reports. And taking her job one step further, she’s developed entirely new management tools and reporting procedures to keep the multi-institutional effort synchronized.

“Dr. Guo is one of our brightest stars,” said Berndt Mueller, Associate Lab Director of NPP. “We are fortunate to have her to assist us with many challenging aspects of project development and execution in NPP. In the process of guiding the work of scores of scientists and engineers, she has single-handedly created a unique and essential role in the development of complex projects with an international context, demonstrating skills of unusual depth and breadth and the ability to apply them across a wide array of disciplines.”

Guo’s management of Phase I won great respect for the project from the high-energy physics community and the Office of Project Assessment (OPA) at the DOE’s Office of Science. The OPA invited her to participate in a panel discussion to share her expertise and help develop project management guidelines that can be used in other Office of Science projects. Guo also worked with BNL’s Project Management Center to help the lab update its own project management system description to meet DOE standards and lay down valuable groundwork for future large projects.

As the ATLAS Phase I upgrade proceeds through the final construction stage, Guo is simultaneously managing the planning stages of HL-LHC.

“We haven’t completely defined the project timeline yet, but it’s projected to go all the way to the end of 2025,” Guo said.

Like Phase I, HL-LHC will ensure ATLAS can perform well while the LHC operates at much higher collision rates so that physicists can further explore the Higgs as well as search for signs of dark matter and extra dimensions.

Although she admits to missing doing research herself, Guo is not disheartened.

“I’m still in the physics world; I’m still working with physicists,” she said. “I enjoy working and interacting with people. So I’m happy.”

Brookhaven’s work on RHIC and ATLAS is funded by the DOE Office of Science.