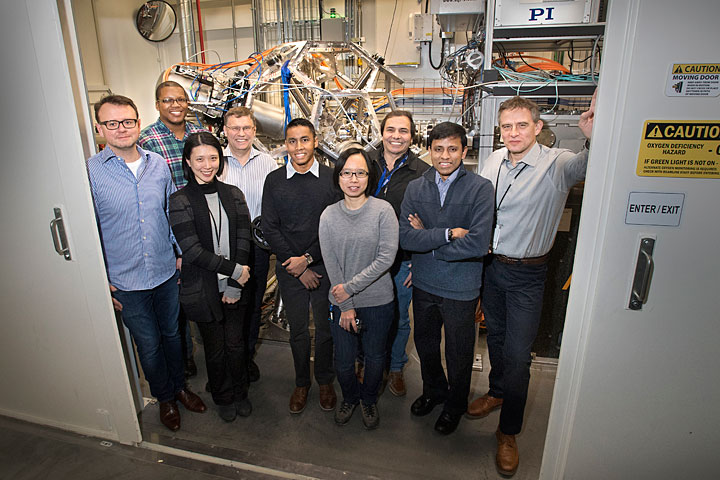 In the March 31 online edition of Synchrotron Radiation News, an article authored by a group of researchers from U.S. Department of Energy’s (DOE) Brookhaven National Laboratory and Stony Brook University describes the research opportunities and tools available (or coming soon) to catalysis scientists at Brookhaven's new state-of the-art synchrotron facility, the National Synchrotron Light Source II (NSLS-II), a DOE Office of Science User Facility. The article is featured as the journal's cover.

Catalysis is a field that is vital to many industrial processes and products, and is the heart of a multi-billion-dollar global industry. The article lays out a comprehensive, detailed picture of NSLS-II as an up-and-coming hub for research in catalysis, and encourages new and veteran catalysis scientists to take advantage of the unique tools, techniques, and capabilities that NSLS-II offers the field.

In addressing the bigger, long-term picture, the authors state that NSLS-II will “[enable] studies that will strive to answer challenging questions in catalysis and meet technological demands in the consumer/industrial world.”

“The extremely high brightness of the x-ray beams at NSLS-II directly benefit many fields of research,” said John Hill, NSLS-II Director and Deputy Associate Laboratory Director for Brookhaven's Energy and Photon Sciences Directorate. “However, it is of particular benefit for catalysis work where researchers want to look at very small signals, or to study reactions in difficult environments. This is one of the areas in which we expect NSLS-II to be a game-changer in research and we have paid close attention to meeting the needs of this community.”

The right tools for the job

As the world's most advanced synchrotron, NSLS-II is intrinsically suited to studying the chemical transformations that underlie catalysis. The facility delivers highly focused x-ray beams of varying energies, from low-energy “soft” x-rays to high-energy, deeply penetrating “hard” x-rays. This range allows researchers to be selective about the kinds of phenomena they want to study and the type of information they want to gather about those reactions.

Moreover, although it will be several years before NSLS-II is fully built out, there is already an impressive array of tools and capabilities for aiding catalysis researchers, allowing them to study chemical reactions as they occur.

Five beamlines that have been designed with the capabilities specifically for in situ and operando studies: Coherent Soft X-Ray 2 (CSX-2), Inner Shell Spectroscopy (ISS), X-Ray Powder Diffraction (XPD), Electron Spectro-Microscopy (ESM), and Sub-micron Resolution X-Ray Spectroscopy (SRX).  They are essential to catalysis studies. In combination, these beamlines can yield a more complete picture of the structure and behavior of a multitude of catalytic materials and processes.

At CSX-2, researchers can probe the core energy levels of light elements, such as carbon, nitrogen, and oxygen—the most common elements present in chemical reactants and products—as well as elemental metals or oxides, which are often active components of catalysts. Furthermore, the two complementary CSX-2 research endstations both allow scientists to create specific conditions under which to study their samples—such as particular pressure or liquid environments—but offer different analysis and data-collection methods.

The ISS beamline allows researchers to take high-quality x-ray absorption data in just seconds while studying a sample under relevant conditions. These features make it uniquely suited for catalysis experiments in reactor conditions. The beamline has two endstations; together, they offer several key options, including the ability to handle large samples and a sample exchange robot that can load multiple samples at once. A particularly attractive feature of ISS is its gas-handling system, which gives researchers easy access to catalytically relevant gases. There are also options for handling liquids, which can be delivered as vapors. The system will be available to users within the next few months.

The XPD beamline consists of two branches and three endstations in total for high-resolution structure determination using x-ray scattering. It offers many ways to accommodate specific users' needs. One endstation, for example, is designed for more elaborate, complex in situ experiments that require a long setup. XPD also provides equipment to deliver a wide range of sample environments, from a liquid helium cryostat to a quadruple furnace.

ESM, which is designed for soft x-ray studies, will fill a critical need in the catalysis community by providing the highest resolution in situ microscopy and spectroscopy in complex sample environments. At one of its two endstations, a low-energy electron microscope, combined with a technique called x-ray photoemission electron microscopy, will allow researchers to directly image surfaces down to a resolution of about 3 nanometers (nm), while also providing information on the surface chemistry, topology, and magnetic properties. This endstation will be ready for users in April.

The capabilities of SRX beamline make it suitable for studies of heterogeneous systems under operando conditions. The beamline's scanning probe analyzes local composition, yielding information on the heterogeneous elemental/chemical nature of the sample. Additionally, the sample can be mounted under ambient conditions, in-air, and can take up a large area – in the millimeter to centimeter range. And, the nature of the two sets of mirrors used at SRX to focus the beam allows researchers to quickly “dial in” the energy they need. The system built around the first set, which provides a sub-micron, high-flux beam, is now accepting user proposals; the second, which provides a sub-100 nm beam and moderate flux, is in the commissioning phase.

The opening of NSLS-II marks a new era in synchrotron-based catalysis research, acknowledging that this would not have been possible without the decades of research and development done at its predecessor, the first NSLS, which is now closed.

“This new facility builds on many years of pioneering work that was conducted at the NSLS synergistically by many scientists from academia, government labs, and industry,” they write. “Over several decades, numerous discoveries in catalysis were driven through the emergence of an arsenal of tools at the NSLS that exploited the power of emerging X-ray methods encompassing scattering, spectroscopy, and imaging.”