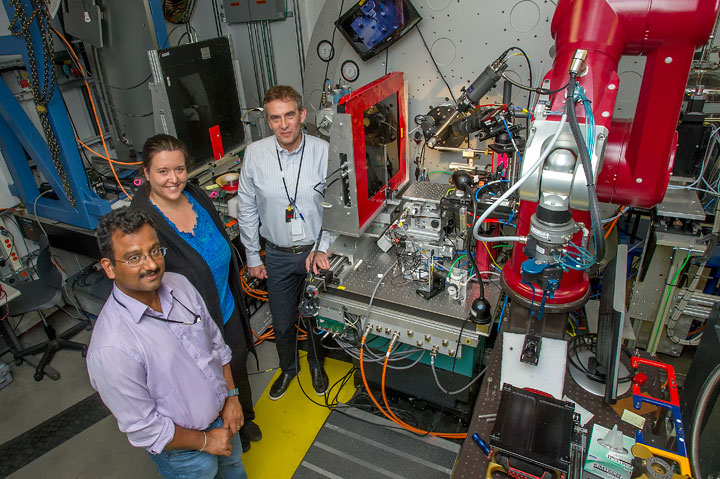 Researchers from The Hebrew University of Jerusalem, Stony Brook University, and the U.S. Department of Energy's (DOE) Brookhaven National Laboratory have discovered new effects of an important method for modulating semiconductors. The method, which works by creating open spaces or "vacancies" in a material's structure, enables scientists to tune the electronic properties of semiconductor nanocrystals (SCNCs)—semiconductor particles that are smaller than 100 nanometers. This finding will advance the development of new technologies like smart windows, which can change opaqueness on demand.

Scientists use a technique called "chemical doping" to control the electronic properties of semiconductors. In this process, chemical impurities—atoms from different materials—are added to a semiconductor in order to alter its electrical conductivity. Though it is possible to dope SCNCs, it is very difficult due to their tiny size. The amount of impurities added during chemical doping is so small that in order to dope a nanocrystal properly, no more than a few atoms can be added to the crystal. Nanocrystals also tend to expel impurities, further complicating the doping process.

Seeking to control the electronic properties of SCNCs more easily, researchers studied a technique called vacancy formation. In this method, impurities are not added to the semiconductor; instead, vacancies in its structure are formed by oxidation-reduction (redox) reactions, a type of chemical reaction where electrons are transferred between two materials. During this transfer, a type of doping occurs as missing electrons, called holes, become free to move throughout the structure of the crystal, significantly altering the electrical conductivity of the SCNC.

"We have also identified size effects in the efficiency of the vacancy formation doping reaction," said Uri Banin, a nanotechnologist from the Hebrew University of Jerusalem. "Vacancy formation is actually more efficient in larger SCNCs."

In this study, the researchers investigated a redox reaction between copper sulfide nanocrystals (the semiconductor) and iodine, a chemical introduced in order to influence the redox reaction to occur. 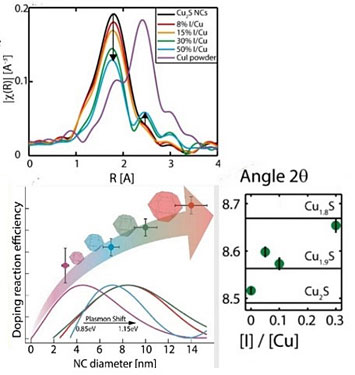 "If you reduce copper sulfide, you will pull out copper from the nanocrystal, generating vacancies and therefore holes," said Anatoly Frenkel, a chemist at Brookhaven National Laboratory holding a joint appointment with Stony Brook University, and the lead Brookhaven researcher on this study.

The researchers used the x-ray powder diffraction (XPD) beamline at the National Synchrotron Light Source II (NSLS-II)—a DOE Office of Science User Facility—to study the structure of copper sulfide during the redox reaction. By shining ultra-bright x-rays onto their samples, the researchers are able to determine the amount of copper that is pulled out during the redox reaction.

Based on their observations at NSLS-II, the team confirmed that adding more iodine to the system caused more copper to be released and more vacancies to form. This established that vacancy formation is a useful technique for tuning the electronic properties of SCNCs.

Still, the researchers needed to find out what exactly was happening to copper when it left the nanocrystal. Understanding how copper behaves after the redox reaction is crucial for implementing this technique into smart window technology.

"If copper uncontrollably disappears, we can't pull it back into the system," Frenkel said. "But suppose the copper that is taken out of the crystal is hovering around, ready to go back in. By using the reverse process, we can put it back into the system, and we can make a device that would be easy to switch from one state to the other. For example, you would be able to change the transparency of a window on demand, depending on the time of day or your mood."

To understand what was happening to copper, the researchers used x-ray absorption fine structure (XAFS) spectroscopy at the Advanced Photon Source (APS)—also a DOE Office of Science User Facility—at Argonne National Laboratory. This technique allows the researchers to study the extremely small copper complexes that x-ray diffraction cannot detect. XAFS revealed that copper was combining with iodine to form copper iodine, a positive result that indicated copper could be put back into the nanocrystal and that the researchers have full control of the electronic properties.

The researchers say the next step is to study materials in real-time during redox reactions using NSLS-II.