By Ricarda Laasch and Stephanie Kossman 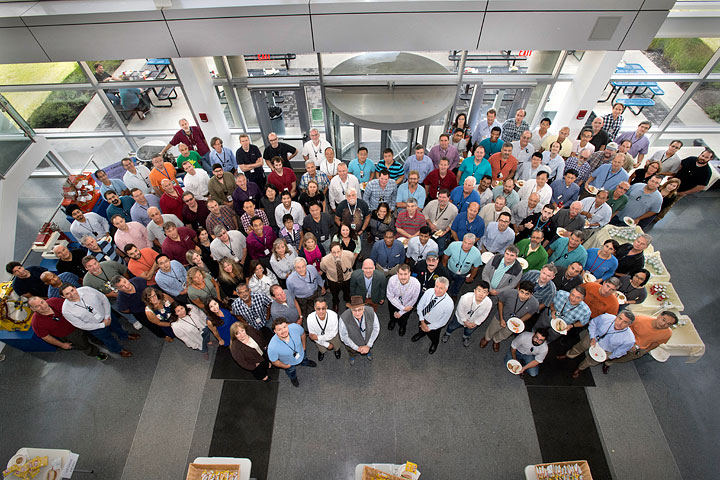 The NEXT project team at NSLS-II

NSLS-II is one of the world’s newest and most advanced synchrotron light sources, which generate light by circulating a beam of electrons. As the electrons move around a storage ring, they change direction and emit light of varying wavelengths, from the infrared range to x-rays. At multiple points around the ring, the light is directed down a beam path, called a “beamline,” to a scientific research instrument, where scientists can study materials with nanoscale resolution and exquisite sensitivity.

All five of the NEXT beamlines are world-class, and offer unique and advanced scientific capabilities to researchers at NSLS-II.

“We wanted to build excellent new beamlines that tackle new science and attract new users,” said Steve Hulbert, NEXT project manager. “Everyone involved with NEXT worked extremely hard to complete the project under budget, without any safety incidents, and two months early. Building these state-of-the-art beamlines so efficiently is a big success for us all at the Lab.” 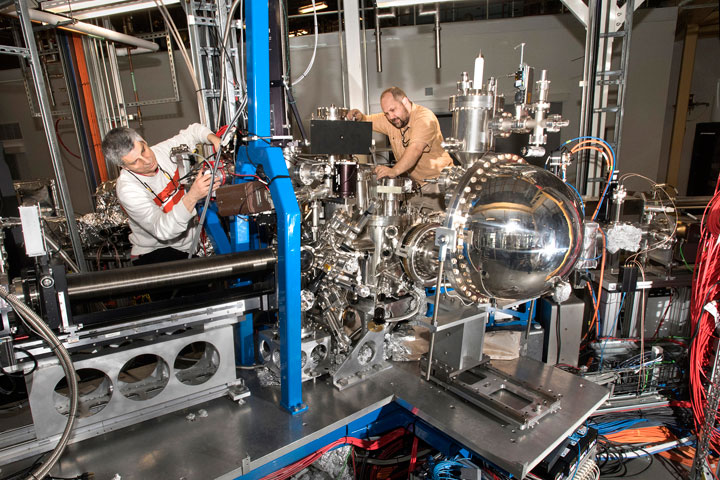 The new beamline 8-ID creates the highest photon flux of all the new beamlines. In other words, this powerful beamline generates the largest amount of photons across a number of different wavelengths. The beamline offers fast x-ray spectroscopy for the study of catalysis and chemical reactions in real-time, as well as a safe and versatile gas-handling system that enables scientists to study a wide range of gases used in catalytic reactions and material growth.

A similar gas handling system is also offered at beamline 4-ID. Both gas handling systems are completely new capabilities at NSLS-II and offer scientists a variety of new experimental conditions for their samples. Beamline 4-ID—one of two tender x-ray scattering beamlines in NEXT—can be specially tuned for the study of novel ordering phenomena, atomic structure of functional surfaces and interfaces, and growth and materials processes. One key instrument is its 6-circle diffractometer, which is capable of measuring samples in many different orientations. NSLS-II has also partnered with the University of Vermont, Stony Brook University, and Boston University on this beamline to provide a supplemental endstation, which enables scientists to conduct a second experiment at the same beamline.

Building strong partnerships with institutions from academia and industry is one of the many ways NSLS-II achieves its world-leading capabilities. Brookhaven’s Center for Functional Nanomaterials (CFN), also a DOE Office of Science User Facility, partnered with NSLS-II to enhance the capabilities of beamline 12-ID. This beamline is designed to investigate soft matter systems using small and wide-angle x-ray scattering, and is capable of investigating the structural details of self-assembled materials on the nanoscale.

NSLS-II and CFN also collaborated to upgrade beamline 21-ID, which can be used for the study of novel and artificially engineered materials using ultraviolet light and soft x-rays. The combination of the beamline’s high quality detectors and tunable, ultra-bright x-rays offer the scientists new ways to study the electronic structure of materials. 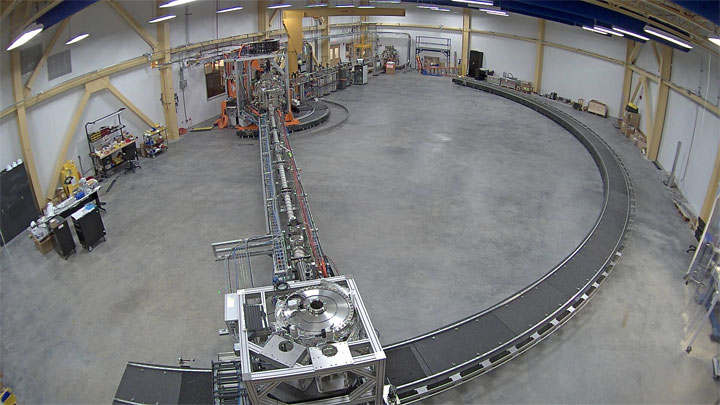 The soft x-ray resonant inelastic scattering (SIX) beamline 2-ID is the longest beamline in the NEXT project. Its endstation fills a satellite building adjacent to the NSLS-II experimental hall with its long detector arm capable of measuring electronic excitations with ultrahigh energy resolution and continuous momentum tenability.

“To maintain the brightness of our photon beam, we use nearly perfect optics to focus the beam to all the endstations. Beamline 21-ID is a good example of these specialized optics, but the most demanding optics we acquired were for the inelastic scattering beamline  2-ID,” Hulbert said. “This beamline has the best resolution in the world.”

Beamline 2-ID is the longest beamline in the NEXT project. The length of the beamline, in combination with these high quality optics, offers researchers an ultrahigh energy resolution to study the electronic structure of condensed matter and novel materials. Beamline 2-ID is the newest precision measurement tool NSLS-II offers to scientists.

In the upcoming years, NSLS-II will continue to grow and expand its capabilities, and could add at least 30 more cutting-edge beamlines for future research.