NSLS-II Welcomes New Tool for Studying the Physics of Materials 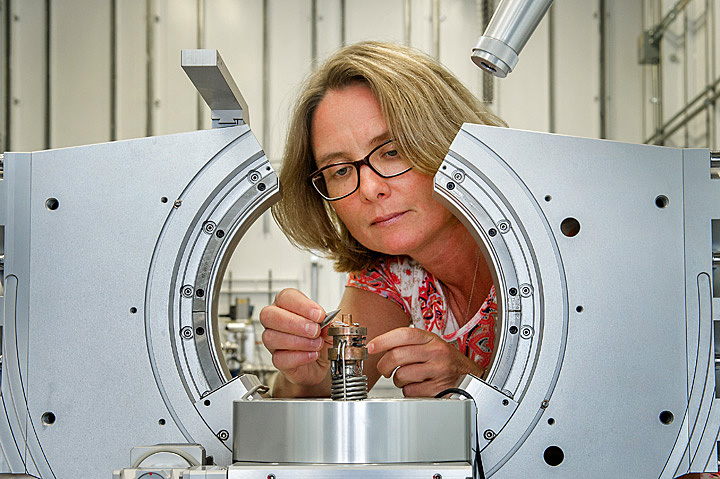 A diffractometer allows researchers to “see” the structure of a material by shooting highly focused x-rays at it and measuring how they diffract, or bounce off. According to Brookhaven physicist Christie Nelson, who worked with Huber X-Ray Diffraction Equipment to design the diffractometer, the new instrument has big advantages compared to one that operated at Brookhaven’s original light source, NSLS. Most significantly, it gives researchers additional ways to control where the beam hits the sample and how the x-rays are detected.

In all diffractometers, both the sample and x-ray detector can rotate in certain directions to let researchers control where the beam hits the sample and where they measure the x-rays that bounce off. This diffractometer, however, has a uniquely large range of motion. The sample can rotate in four directions with extremely high precision, and in two of those directions it rotates much farther than in most other instruments. With this amount of control, researchers can target the precision of the x-ray beam to within 60 millionths of a meter.

It's a huge upgrade. There's only one other like it in the world.

The instrument also has two detectors. While one allows users to quickly survey the overall structure of a sample, the other gives a zoomed-in view of the material’s subtler details. Since this diffractometer can have both detectors attached at the same time, researchers can quickly switch between these two views.

“It’s a huge upgrade. There’s only one other like it in the world,” said Nelson, referring to a similar instrument at PETRA-III, an x-ray light source in Germany.

This diffractometer can also hold a cold chamber for looking at samples over a wide range of temperatures, all the way down to two Kelvin, or -271 degrees Celsius.

“That’s crazy cold,” said Nelson—it’s just two degrees above “absolute zero,” the coldest anything can be.

This cold chamber lets researchers study materials whose properties change with temperature. A research group from the University of California, Berkeley, has already used it to study superconductors, which need intense cold to function. The diffractometer allowed them to see fundamental changes in the material’s electronic structure as the temperature decreased.

In the future, Nelson expects scientists will use the tool to examine materials at very high temperatures, under an electric or magnetic field, or in an environment with a custom atmosphere. 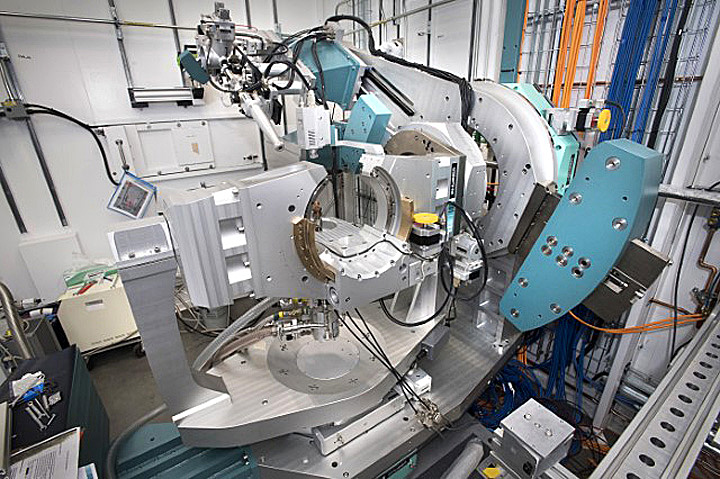 The newly acquired diffractometer before its installation at NSLS-II.

The diffractometer additionally allows researchers to study magnetism. Similar to the way polarized sunglasses only let in light oriented in a certain direction, NSLS-II produces ‘polarized’ beams of x-rays that are all lined up the same way. When these x-rays interact with magnetic areas of a sample, their orientation shifts. The diffractometer can detect these subtle changes, allowing researchers to study a material’s different magnetic characteristics.

A group from the University of Toronto used this feature to study the magnetic properties of “double perovskites.” Although these materials are structurally similar to those used in prototype solar cells, the Toronto group is most interested in their unique magnetic properties and potential applications in quantum computing and information storage.

Nelson looks forward to welcoming future research teams to use the new instrument at NSLS-II. “It’s yet another tool that enables the cutting-edge discoveries that happen here,” she said.

NSLS-II is funded by the DOE Office of Science.