A team of scientists from the U.S. Department of Energy’s Brookhaven National Laboratory and the University of Connecticut have developed a customizable nanomaterial that combines metallic strength with a foam-like ability to compress and spring back.

“We engineered materials that can store and release an unprecedented amount of mechanical energy on the nanoscale—for its weight, one of the highest ever among known high-strength engineering materials,” said Brookhaven Lab scientist and principal investigator Chang-Yong Nam. “And our technique fits into existing industrial semiconductor processes, which means the jump from the lab to practical applications should be straightforward.”

This video shows nanomechanical testing with a nanopillar compressing and releasing.

The study, published on October 19 in the journal Nano Letters, describes nanostructures spanning just a few billionths of a meter in size composed of organic and inorganic molecules. These custom-patterned structures—like the pillars explored in this study—will enable more advanced nanoelectromechanical systems (NEMS), for example in devices that require ultra-small springs, levers, or motors. NEMS technology that could potentially exploit this new material includes ultrasensitive accelerometers, multi-functional resonators, and biosynthetic artificial muscles.

“The breakthrough relied on us developing the synthesis,” Nam added. “We linked expertise in atomic layer deposition and electron beam lithography with innovative vapor-phase material infiltration to bring these new materials to life.”

The collaboration sought to enhance one specific parameter: the “modulus of resilience,” or the measure of a material’s ability to absorb mechanical energy and then release it without suffering structural damage. This requires both high mechanical strength and low stiffness—a rare combination, as those qualities usually increase simultaneously.

“Our organic-inorganic hybrid materials exhibit metal-like high strength but foam-like low stiffness,” said coauthor Keith Dusoe of the University of Connecticut, who conducted the nanomechanical testing and theoretical analysis. “This unique coupling of mechanical properties accounts for our material’s ability to store and release an extraordinarily large amount of elastic energy.”

That essential elasticity—like the flex and release of a muscle—is constrained by both the chemistry and the structure, so the scientists turned to a hybrid material including both organic and inorganic elements. 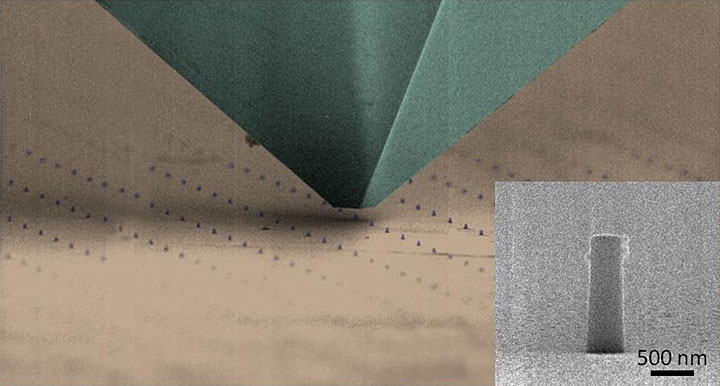 This scanning electron micrograph (SEM) image shows the nanomechanical testing tip passing over the arrays of custom-made nanopillars as it applies pressure to test elasticity and energy storage potential. The inset shows the structure of an individual hybrid nanopillar.

The process began with lithography, where a focused beam of electrons carved small pillars (300 nanometers wide and 1000 nanometers tall) into a polymer called SU-8, a light-sensitive material typically used for micrometer-scale device fabrication. The precise geometry of the lithography process laid the structural foundation for the subsequent infiltration by inorganic elements—both conducted at Brookhaven Lab’s Center for Functional Nanomaterials (CFN), a DOE Office of Science User Facility.

The team placed the nanopillar array in a vacuum chamber and introduced an aluminum precursor vapor—a process called atomic layer deposition (ALD). The precursor naturally soaks into pores in the polymer pillars, a bit like molecular concrete smoothing over cracks and fissures in a sidewalk. Subsequent exposure to water transformed the aluminum precursor into a metal oxide molecule, which strengthens the polymer matrix. The number and duration of these exposures allows researchers to tune the ultimate mechanical properties of the material.

“This infiltration process should enable the unique combination of mechanical elastic resilience with electronic and even optical properties, given the various inorganic material systems that we can infiltrate,” Nam said. “Such hybrid materials would be truly new, with never-before-seen combined properties. And crucially, we can execute this step with commercially available and scalable deposition systems.” 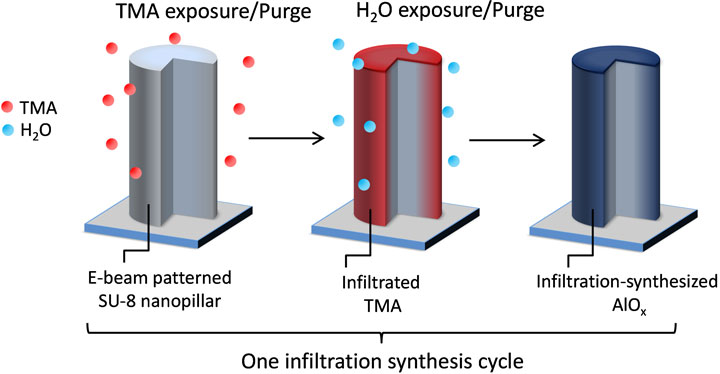 This diagram shows the breakthrough synthesis process developed for these hybrid nanomaterials. First, electron-beam lithography carves the isolated nanopillars, then an aluminum vapor (TMA) infiltrates the pores in the structures, and finally exposure to water creates the final aluminum-oxide infused material.

They tested the chemical composition and structure with transmission electron microscopy at CFN, which revealed that the spherical aluminum oxide clusters remained chemically discrete but fully integrated into the nanopillar matrix.

“This thorough mixing, and in particular the spherical shape of the metal oxide clusters, contributes to the remarkable modulus of resilience,” Dusoe said. “Without the infiltrated nanoscale metal oxide filler, the polymer pillars would be crushed under mechanical strain.”

To test that resilience, scientists at the University of Connecticut ran a nanomechanical tip across the sample, which was able to gently press down on individuals pillars—each one some 200 times thinner than a human hair. The team measured the relationship between the elastic mechanical energy, the material’s ability to store and release it, and the structural integrity.

“The high modulus of resilience and high strength are truly surprising,” said Seok-Woo Lee, the principal investigator of the University of Connecticut team. “Our hybrid material can provide great protection from mechanical impact and the superior strength on the surface layer guarantees excellent wear resistance. The infiltration technique will make a great impact in nanofabrication communities.”

The collaboration will continue to tweak the structural and chemical properties to further exploit these materials and ready them for applications.

“Infiltration synthesis is still a relatively new technique,” Nam said. “I am thrilled about its future applications in generating new functional hybrid materials and inorganic nanostructures for enhancing the performance of various sensing, energy, and environmental technologies.”