A More Luminous Future at RHIC

After several years of budgets that provided inadequate funding, members of the Relativistic Heavy Ion Collider (RHIC) and Alternating Gradient Synchrotron (AGS) user communities learned at the 2009 RHIC & AGS Users Meeting that they could focus on the future with a renewed sense of support.

More than 180 participants came to BNL for the annual meeting, which was held June 1-5. Throughout the week, attendees heard from representatives from BNL, the Department of Energy (DOE), the National Science Foundation (NSF), and other participating institutions as they spoke about the ongoing ninth running of RHIC, the current funding situation, and other issues for the user community.

The speakers, award winners, and organizers of the 2009 RHIC & AGS Users Meeting.

Following three days of workshops and an educational symposium on accelerator science, attendees gathered in Berkner Hall on June 4th and 5th for two days of plenary sessions. After the attendees were welcomed by RHIC Users Executive Committee (UEC) chair Abhay Deshpande of Stony Brook University (SBU), presenters from BNL’s Collider-Accelerator Department and the PHENIX and STAR experiments provided updates and details of Run 9, which began in early February and is scheduled to provide beam collisions at RHIC through July 3.

Words from the Director

Lab Director Sam Aronson reported the good news that the RHIC program will receive stimulus funds for accelerator and infrastructure improvements as well as detector upgrades, which will speed up access to the future RHIC-II. He also announced that next year’s proposed budget provides for 30 full weeks of operations. “If that budget survives,” Aronson said, “we’ll be in good shape in terms of finally getting back to the utilization of RHIC, which is a phenomenal facility that has suffered underutilization due to budget constraints over the past few years.”

Aronson then outlined the Lab’s 10-year strategy and its “diverse portfolio” of major activities: photon sciences; quantum-chromodynamics (QCD); energy; physics of the universe; and climate, environmental, and biosciences. He also foresaw a stronger BNL emphasis on applied research to address some of the nation’s critical problems and highlighted the Lab’s 15-year contract with New York State for lower-cost power, which will help minimize RHIC’s operation costs.

Updates from DOE and NSF

First, Henry drew attention to President Obama’s outward support of science, which includes the “lofty” goal of dedicating three percent of the nation’s Gross Domestic Product toward R&D. The new administration’s dedication to science is already apparent in the Office of Science’s Nuclear Physics FY09 budget, which increased from $434 million in FY08 to $512 million, about an 18 percent increase, Henry said. The President’s request for FY10 would boost that number by another eight percent, at the same time increasing RHIC funding by almost eight percent – from $149 million to $160 million.

“2009 is the first substantial increase we’d had in about 10 years,” Henry said. “We’re on a trajectory that is really nice. Now the question is, can we maintain that?” 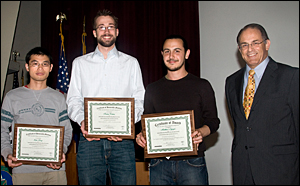 Henry also outlined where stimulus funds are being used within the Nuclear Physics program, including advanced funding for the 12 GeV upgrade of Thomas Jefferson National Laboratory’s Continuous Electron Beam Accelerator Facility (CEBAF), a neutron physics beamline at the Oak Ridge National Laboratory’s Spallation Neutron Source, enhanced Accelerator Improvement Project funding at national user facilities (including $8M at RHIC for the implementation of stochastic cooling and electron lenses), fellowships for junior researchers, and two upgrades at RHIC’s PHENIX detector: the silicon vertex detector and the forward vertex detector. These RHIC improvements, in addition to luminosity upgrades, are a “real success story for R&D,” Henry said. “Originally, this project to increase collision rates was going to be more than $100 million,” he said about the implementation of stochastic cooling, which, after much research, replaced an earlier idea called electron cooling and drastically reduced the price tag to about $10 million. “The R&D at the Lab has been an extraordinary success.”

Next, Keister told a similar “good news” story about recent funding for the NSF, which received a seven percent increase over FY08, to $5.183 billion in FY09. The FY10 President’s request would further increase funding to $7 billion, placing the NSF on a trajectory to reach $10 billion in funding by 2014, Keister said. Included in the FY09 numbers is a 0.5 percent increase in funding for projects within NSF’s Nuclear Physics Program experiment subdivision and a 4.5 percent increase in the Nuclear Physics Program theory subdivision. In addition, the experiment and theory subdivisions received $12 million in stimulus funds. The NSF has decided to use this money primarily to fund more investigators, Keister said. This will be done through the addition of standard, multi-year awards meant to avoid problems in case of possible future budget cuts.

The User Executive Committee In Action

During the Users’ Executive Committee (UEC) update meeting on Friday afternoon, Deshpande provided an overview of the UEC’s recent initiatives and accomplishments.

According to Desphande, the UEC held several open forums to discuss funding politics, quality of life issues, and careers throughout 2008 and 2009. He also spoke of his visits to Washington D.C. prior to congressional votes on several science-related bills and the Lab’s efforts to reduce the time it takes for users to access the site. 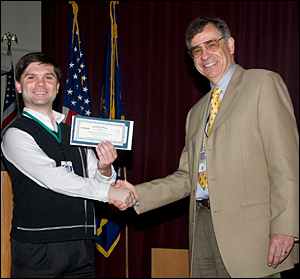 During the plenary, SBU’s Matthew Nguyen was announced as this year’s thesis award competition winner for his work, “Two Particle Correlations with Direct Photon and π^0 Triggers in 200 GeV p+p and Au+Au Collisions.” SBU’s Torsten Dahms, University of British Columbia’s Joss Ives, and the University of Science and Technology of China’s Zebo Tang received honorable mention for their theses and Oleksandr Grebenyuk of Lawrence Berkeley National Lab won the poster contest for his work, titled “Local Polarimetry with Zero Degree Calorimeter at STAR.”

The Near-Term and Long-Term Future

Prior to the conclusion of the weeklong event, Associate Laboratory Director for Nuclear and Particle Physics Steve Vigdor recognized numerous achievements made by RHIC scientists and staff in the last year and then presented the long-term strategic vision for RHIC. The department is making great progress in implementing luminosity upgrades that would enable RHIC-II science, Vigdor said, including work on the Electron Beam Ion Source (EBIS), scheduled for completion in FY10; the implementation of stochastic cooling and electron lenses, expected to be in place by 2012 and 2013, respectively; and planning for the STAR detector’s heavy flavor tracker, which received DOE’s Critical Decision 0 (CD-0) in FY09 and is hoping to receive CD-1 in the fall.

Vigdor also discussed the possibility of building an electron ion collider (EIC), either at Brookhaven (called eRHIC) or at Thomas Jefferson Lab (called ELIC). An EIC task force has been set up at Brookhaven and the first joint BNL-JLab EIC advisory committee meeting, held in February, resulted in several recommendations, including that the Labs decide which of the two labs will host the machine.

If selected, eRHIC would start producing collisions in the mid 2020’s. Plans also are in the works for a medium-energy first stage, called MeRHIC, which might be available by 2020. This would collide existing RHIC ion and proton beams with electron beams from a 4 GeV energy recovery linear accelerator, with the vast majority of the equipment to be reused subsequently for the full-energy 10–20 GeV machine.

Vigdor said that regardless of the exact path the Laboratory takes in the future, “BNL is strongly committed to maintaining RHIC’s success through another generation.”