From intern to Lab employee 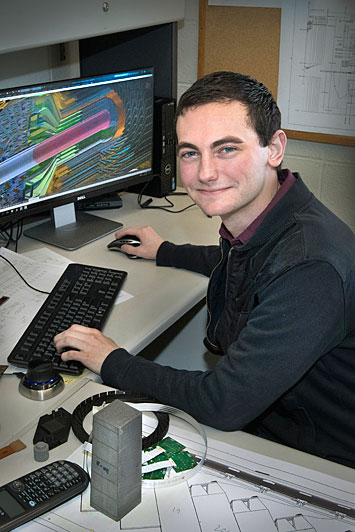 When Daniel Cacace first came to visit the U.S. Department of Energy’s (DOE) Brookhaven National Laboratory during Summer Sundays as a young boy, he already felt there was something special about the Lab that was just down the road from his family home in Shoreham.

“I was always an inquisitive kid and liked figuring things out,” said Cacace, who also visited the Lab as a participant in the bridge and maglev contests.

Fast forward to 2014 and Cacace spent his summer working as an intern in the Lab’s Environmental Science Department. At the age of 20, he was developing plans and design documentation for a mobile aerosol observing system.

The following summer, Cacace returned to Brookhaven via the Lab’s Office of Educational Programs. He was a participant in the Science Undergraduate Laboratory Internship (SULI) program funded by the U.S. Department of Energy as part of its STEM workforce development mission. That is when Cacace met his mentor Don Lynch, an engineer working on the sPHENIX project. sPHENIX is an upgrade to the existing PHENIX detector at Brookhaven’s Relativistic Heavy Ion Collider (RHIC), a DOE Office of Science user facility for nuclear physics research.

“Dan is a smart and hard-working young man. He hit the ground running as soon as he joined our group in sPHENIX,” said Lynch. “He did such a good job his first summer as an intern that we invited him back the following year.”

In 2016, Cacace returned to the Lab as a graduating senior participant in the SULI program.

“He is knowledgeable on subsystems and mechanical design. He was an extraordinary intern and has been an outstanding asset to the sPHENIX group. We’re happy to have him on our team now as a full-time Lab employee,” said Lynch.

As a full-time Lab employee, Cacace is designing subsystems for the sPHENIX detector, including hadronic calorimeters, intermediate silicone strip trackers, and electromagnetic calorimeters. Each of these subsystems will detect and track particles produced in collisions at RHIC, and allow nuclear physicists to explore details of the quark-gluon plasma created in these collisions.

“I am so happy to have found a job at the Lab,” said Cacace. “It’s exciting to be even one small part of a big project like sPHENIX. This is exactly where I want to be. I am grateful for the opportunity to do such meaningful work that I believe may change our world.”

Full Circle: From Mentee to Mentor

Cacace said that he has learned a lot from his mentors, particularly Lynch, who regularly volunteers for educational program contests and has been a long-time mentor.

“The least I can do is give back by volunteering to be a mentor this summer and motivate new engineers,” Cacace said. “I’m looking forward to that experience and to hopefully follow in the footsteps of my mentors who have led by example.”

When Cacace isn’t busy designing subsystems, he spends time on the beach, kayaking on the north shore of Long Island, and tinkering with 3D printing projects. “Ok, perhaps I do a little video gaming, too,” he said with a smile.