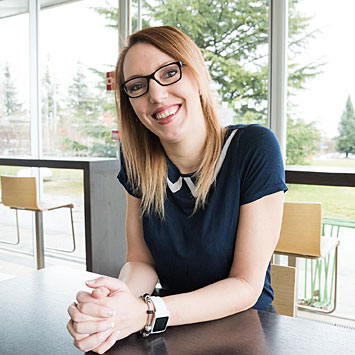 Claire Lee, a Brookhaven Lab particle physicist who works on the ATLAS experiment at the Large Hadron Collider at CERN. (Credit: CERN)

Particle physicist Claire Lee ­­­­­­­­is no stranger to the spotlight. Lee’s performance background and comfort on stage are certainly advantages when it comes to communicating science in front of large audiences. She’s given astronomy lectures, sure, but she’s also performed stand-up comedy routines with fellow researchers. Lee said she’s learned to use her acting, public speaking, and communication skills to convey her excitement for scientific research.

“I’m the type of person who enjoys being on a stage in front of people,” explained Lee. “I’ve always enjoyed giving talks about physics.”

Lee, who is from South Africa, is a postdoctoral research associate at the U.S. Department of Energy’s Brookhaven National Laboratory. She works on the ATLAS experiment, one of seven particle detector experiments analyzing data from collisions of particles such as protons and lead ions at the Large Hadron Collider (LHC) in Europe. The goals of ATLAS are to provide a better understanding of the basic forces that shape the universe and to discover insights into possible “new physics,” including extra dimensions of space and the nature of dark matter.

Lee’s research on the basic forces of the universe and her approach to non-traditional science communication led her to star in a video (below) created by US LHC in anticipation of the release of the 2017 “Star Wars: The Last Jedi” movie. The video aimed to explain “The Force” in the context of the four fundamental forces of nature.

Watch this US LHC video featuring Brookhaven physicist Claire Lee as a Jedi Master explaining "The Force" in the context of the four forces. (Credit: US LHC)

“It’s not every day you get to dress up as a Jedi,” Lee laughed. “I was sitting in a big ATLAS meeting with my braided hair.”

Lee learned about the force of attraction between an actor and her audience in high school while taking drama classes alongside the science staples of math, biology, and physics. She also gained public speaking experience in college when she joined a local astronomy society, giving occasional talks until people started requesting her lectures on a more regular basis.

While working on her master’s degree in nuclear physics at the University of the Witwatersrand, Lee attended a national physics conference where she met Brookhaven physicist Ketevi Assamagan. After discussing the ATLAS experiment with Assamagan, Lee visited CERN. At the time, South Africa was not involved with the experiment, but South African physicists advanced the effort to become part of the project over the course of the next two years and became an official member of ATLAS in 2010.

While earning her doctorate at the University of Johannesburg, Lee was awarded a joint research position with South Africa and Taiwan, allowing her to relocate to CERN and work directly on the ATLAS experiment. There, she became involved with FameLab, one of the world’s largest science communication competitions in which contestants have just three minutes to explain a scientific concept to a general audience. Judges assess the contestants on the content, clarity, and charisma of their scientific talks. 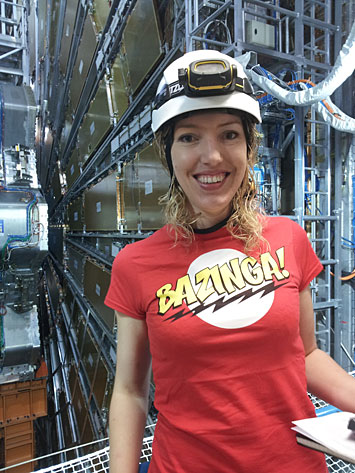 In 2013, Lee was among the top ten FameLab finalists, seven of whom worked at CERN at the time. As a reward for reaching the last round, the finalists spent a weekend in Zurich, Switzerland, at a communications master class. Upon returning to CERN, the seven finalists organized and performed a standup comedy show for their colleagues.

“All of us—mostly scientists—were complete amateurs when it came to comedy. It was a lot of fun,” said Lee. “We ran that show for two years, which was really cool.”

Today, Lee continues to work on ATLAS and helps run one of the experiment’s calorimeters—devices used to measure the energy of the particles that come out of the LHC collisions. She also studies simulations that will help physicists prepare for the LHC high-luminosity upgrade, which will dramatically increase the rate of particle collisions. Lee focuses on studies examining the various methods and expected results of upgrading the detector.

She hopes to continue her studies of the electroweak interaction—or the interaction of two of the four known fundamental forces of nature: electromagnetism and the weak interaction.

Lee believes that most people share this natural curiosity about the universe. That’s part of what motivates her to communicate this interest and excitement for science to the public, often using unconventional methods. For instance, when she gave a TED Talk in Austria, she used Legos to help her audience understand the smallest building blocks of the universe and the physics behind the Large Hadron Collider.

Brookhaven Lab physicist Claire Lee helps her audience understand the smallest building blocks of the universe during a TED Talk she gave in Austria in 2015. (Courtesy: Claire Lee)

“What’s exciting is just trying to understand the universe at its most basic level,” Lee said. “In general, the public is really interested in this sort of thing. This curiosity is a very core part of humanity.”

She also believes that scientists should accept responsibility for relaying their research.

For researchers, the key to communicating science is to remain completely open and accessible, she explained. Such openness, she said, can help combat fake news, fear mongering, and misconceptions about science.

Participating in communications and outreach efforts also gives scientists from different backgrounds the chance to act as role models, which can help diverse audiences potentially see themselves as scientists.

“Role models can be very important,” said Lee. “Because if you can’t visualize yourself in a certain position, then it’s going to be extremely hard for you to actually have the motivation to take the steps to reach that position. I think that’s why a lot of people end up somewhere else.”

Of course, there are many different approaches to science communication. No two scientists have the same skillsets, Lee acknowledged. But she encourages all scientists to play to their individual strengths in their communication efforts.

“People are different, and not everyone wants to dress up like a Jedi or go on stage,” Lee said, “but I encourage all scientists to spread the word about their work, why it’s exciting, and why it matters.”

Brookhaven’s role in the LHC is supported by the DOE Office of Science.