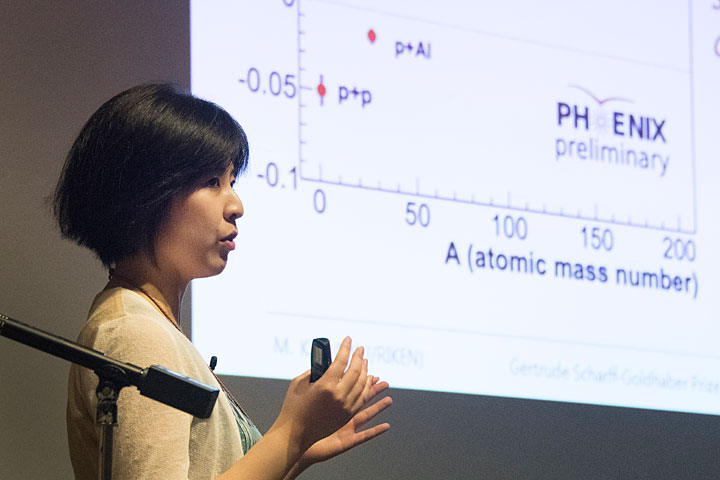 Brookhaven Women in Science (BWIS) awarded the 2018 Gertrude Scharff-Goldhaber Prize to Minjung Kim, a graduate student at Seoul National University, at a ceremony held on July 17. Each year BWIS awards this $1,000 prize to a female graduate student conducting physics research at the U.S. Department of Energy’s (DOE) Brookhaven National Laboratory and/or attending Stony Brook University. Kim received the prize for her thesis work on the mechanisms behind producing neutrons in high-energy particle collisions.

Funded by Brookhaven Science Associates, the award was established in 1992 to honor the late nuclear physicist Gertrude Scharff-Goldhaber, who contributed to scientists’ understanding of nuclear fission and the structure of atomic nuclei. In 1950, Scharff-Goldhaber became the first female Ph.D. physicist appointed to the Brookhaven Lab staff—she was also a founding member of BWIS in 1979. Goldhaber’s son, Fred, who attended the prize ceremony, said that his mother overcame considerable odds, battling persecution as a Jew in Nazi Germany to earn her Ph.D. and later relocating to the U.S. to pursue her research in a male-dominated field.

Along with scientists at Brookhaven Lab and Japan’s RIKEN laboratory, Kim studies how neutrons are produced in high-energy particle collisions while measuring the polarization, or spin direction, of colliding protons at the Relativistic Heavy Ion Collider (RHIC)—a DOE Office of Science User Facility for nuclear physics research. Typically, neutrons produced when a spinning proton collides with another proton come out with a rightward-skew preference, Kim explained. But when a spinning proton collides with a much larger nucleus—for example, a gold nucleus—the neutrons’ directional preference switches to the left. She compared this to a hypothetical game of billiards in which a cue ball spins to the right if it strikes the target billiard ball but to the left if it strikes something larger like a bowling ball—a truly surprising situation.

Kim was the first to notice this unexpected phenomenon. The RHIC scientists ultimately concluded that the neutrons’ directional preferences depend on the species of the nucleus, which is contrary to previous predictions. Kim explained that she is still investigating the surprising results behind these neutron production mechanisms.

“This prize gives me the motivation to continue my research and keep improving,” Kim said. “I’m very honored and humbled to receive this award and to be part of this legacy.”

Kim joins a long line of accomplished female physicists who followed in Scharff-Goldhaber’s footsteps. Nearly three-quarters of all former prize recipients have careers in academia and more than half have tenure-track positions, said Marc-André Pleier, chair of the BWIS Scharff-Goldhaber Prize selection committee.

“These prize winners have done exceedingly well in the past,” Pleier said. “These successful, young rising stars in science act as role models for other young women.”

BWIS President Wen Hu agreed. “This prize is very encouraging for young women at the beginning of their scientific careers,” she said. “We want to see more women in STEM [science, technology, engineering, and math], and with this prize, BWIS has the opportunity to encourage women to enter and stay in the field.”

Kim added that it’s critical for female scientists to show young women that success in the field is possible. She said that during high school, many young women might simply give up on science because they are not given the support or reassurance that they need.

“Prizes like this one are important for motivating female students,” Kim said. “There are so many women doing well in physics, and it’s important to show that.”

Kim, who grew up in Chuncheon, Korea, has been interested in physics ever since she read a book about special relativity and nuclear physics during middle school. Pursuing her passion for science, she attended Kangwon Science High School in Wonju and then completed a B.A. in physics and a B.A. in math at Seoul National University, where she then enrolled as a Ph.D. student. Kim currently conducts research in experimental nuclear physics as a RIKEN International Program Associate under the advisement of Kiyoshi Tanida. She plans to defend her thesis next semester.