UPTON, NY—Imagine playing a game of billiards, putting a bit of counter-clockwise spin on the cue ball and watching it deflect to the right as it strikes its target ball. With luck, or skill, the target ball sinks into the corner pocket while the rightward-deflected cue ball narrowly misses a side-pocket scratch. Now imagine your counter-clockwise spinning cue ball striking a bowling ball instead, and deflecting even more strongly—but to the left—when it strikes the larger mass.

That’s similar to the shocking situation scientists found themselves in when analyzing results of spinning protons striking different sized atomic nuclei at the Relativistic Heavy Ion Collider (RHIC)—a U.S. Department of Energy (DOE) Office of Science User Facility for nuclear physics research at DOE’s Brookhaven National Laboratory. Neutrons produced when a spinning proton collides with another proton come out with a slight rightward-skew preference. But when the spinning proton collides with a much larger gold nucleus, the neutrons’ directional preference becomes larger and switches to the left. 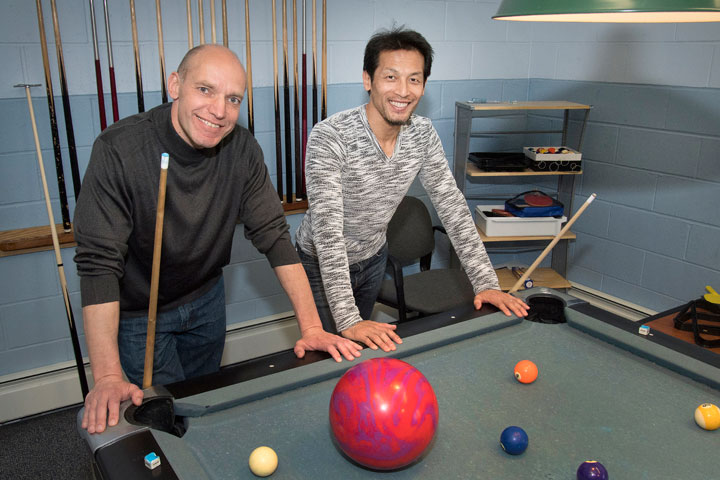 “What we observed was totally amazing,” said Brookhaven physicist Alexander Bazilevsky, a deputy spokesperson for the PHENIX collaboration at RHIC, which is reporting these results in a new paper just published in Physical Review Letters. “Our findings may mean that the mechanisms producing particles along the direction in which the spinning proton is traveling may be very different in proton-proton collisions compared with proton-nucleus collisions.”

What we observed was totally amazing!

Understanding different particle production mechanisms could have big implications for interpreting other high-energy particle collisions, including the interactions of ultra-high-energy cosmic rays with particles in the Earth’s atmosphere, Bazilevsky said.

Spin physicists first observed the tendency of more neutrons to emerge slightly to the right in proton-proton interactions in 2001-2002, during RHIC’s first polarized proton experiments. RHIC, which has been operating since 2000, is the only collider in the world with the ability to precisely control the polarization, or spin direction, of colliding protons, so this was new territory at the time. It took some time for theoretical physicists to explain the result. But the theory they developed, published in 2011, gave scientists no reason to expect such a strong directional preference when protons were colliding with larger nuclei, let alone a complete flip in the direction of that preference. 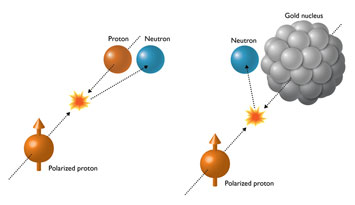 Neutrons produced when a spin-aligned (polarized) proton collides with another proton come out with a slight rightward-skew preference. But when the polarized proton collides with a much larger gold nucleus, the neutrons' directional preference becomes larger and switches to the left. These surprising results imply that the mechanisms producing particles along the beam direction may be very different in these two types of collisions.

“We anticipated something similar to the proton-proton effect, because we couldn't think of any reasons why the asymmetry could be different,” said Itaru Nakagawa, a physicist from Japan’s RIKEN laboratory, who served as PHENIX’s deputy run coordinator for spin measurements in 2015. “Can you imagine why a bowling ball would scatter a cue ball in the opposite direction compared with a target billiard ball?”

2015 was the year RHIC first collided polarized protons with gold nuclei at high energy, the first such collisions anywhere in the world. Minjung Kim—a graduate student at Seoul National University and the RIKEN-BNL Research Center at Brookhaven Lab—first noticed the surprisingly dramatic skew of the neutrons—and the fact that the directional preference was opposite to that seen in proton-proton collisions. Bazilevsky worked with her on data analysis and detector simulations to confirm the effect and make sure it was not an artifact from the detector or something to do with the adjustment of the beams. Then, Nakagawa worked closely with the accelerator physicists on a series of experiments to repeat the measurements under even more precisely controlled conditions. 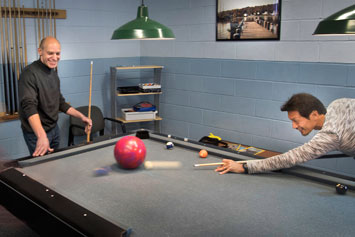 "Can you imagine why a bowling ball would scatter a cue ball in the opposite direction compared with a target billiard ball?" asked RIKEN physicist Itaru Nakagawa.

“This was truly a collaborative effort between experimentalists and accelerator physicists who could tune such a huge and complicated accelerator facility on the fly to meet our experimental needs,” Bazilevsky said, expressing gratitude for those efforts and admiration for the versatility and flexibility of RHIC.

The new measurements, which also included results from collisions of protons with intermediate-sized aluminum ions, showed the effect was real and that it changed with the size of the nucleus.

To understand the findings, the scientists had to look more closely at the processes and forces affecting the scattering particles.

“In the particle world, things are much more complicated than the simple case of (spinning) billiard balls colliding,” Bazilevsky said. “There are a number of different processes involved in particle scattering, and these processes themselves can interact or interfere with one another.” 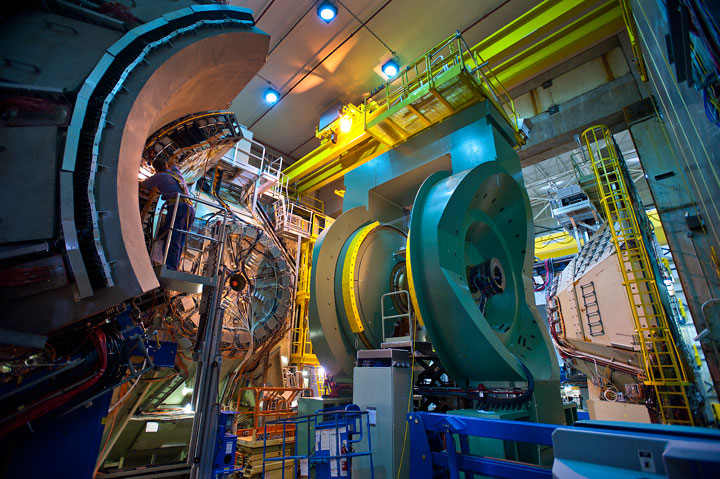 The PHENIX detector at the Relativistic Heavy Ion Collider (RHIC).

“The measured asymmetry is the sum of these interactions or interferences of different processes,” said Kim.

Nakagawa, who led the theoretical interpretation of the experimental data, elaborated on the different mechanisms.

The basic idea is that, in the case of large nuclei such as gold, which have a very large positive electric charge, electromagnetic interactions play a much more important role in particle production than they do in the case when two small, equally charged protons collide.

“In the collisions of protons with protons, the effect of electric charge is negligibly small,” Nakagawa said. In that case, the asymmetry is driven by interactions governed by the strong nuclear force—as the theory developed back in 2011 correctly described. But as the size, and therefore charge, of the nucleus increases, the electromagnetic force takes on a larger role and, at a certain point, flips the directional preference for neutron production.

The scientists will continue to analyze the 2015 data in different ways to see how the effect depends on other variables, such as the momentum of the particles in various directions. They’ll also look at how preferences of particles other than neutrons are affected, and work with theorists to better understand their results.

Another idea would be to execute a new series of experiments colliding polarized protons with other kinds of nuclei not yet measured.

“If we observe exactly the asymmetry we predict based on the electromagnetic interaction, then this becomes very strong evidence to support our hypothesis,” Nakagawa said.

In addition to providing a unique way to understand different particle production mechanisms, this new result adds to the puzzling story of what causes the transverse spin asymmetry in the first place—an open question for physicists since the 1970s. These and other results from RHIC’s polarized proton collisions will eventually contribute to solving this question.