The Computational Science Initiative is building its staff, capabilities, and programs in this emerging research area expected to revolutionize science and other fields 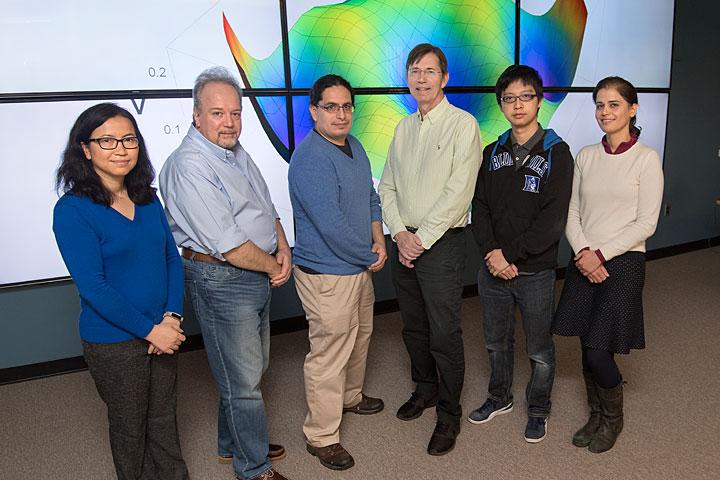 An emerging and exciting research field known as quantum information science (QIS) is ramping up in the Computational Science Initiative (CSI) at the U.S. Department of Energy’s (DOE) Brookhaven National Laboratory.

“Because of our extraordinary data management, analysis, and distribution requirements at Brookhaven Lab, we are always on the look out for new computational technologies that will enable us to continue to provide leading services,” said CSI Director Kerstin Kleese van Dam. “Quantum computing and networking are among these promising technologies, and we want to make sure we are at the forefront of this exciting new research and development.”

From classical to quantum computing

The computers we use today store and process information in the form of binary digits (bits) that encode a value of zero or one. The values represent two different states, such as off or on, true or false, and yes or no.

A schematic illustrating the difference between a bit (left) and qubit (right). A bit can be at either of the two poles of the imaginary sphere, while a qubit can be at any point within the volume of the sphere. Credit: IBM.

By contrast, quantum computers use quantum bits, or qubits, that can exist as a zero and one at the same time. This newer form of computing takes advantage of the strange way that matter behaves at atomic and subatomic scales. In this quantum world, atoms and subatomic particles appear to exist in multiple states or places at the same time (quantum superposition) and can correlate their behavior across large distances (quantum entanglement). Because of these quantum mechanical phenomena, quantum computers can store much more information, perform calculations significantly faster, and use less energy than classical computers.

At Brookhaven Lab, CSI staff are evaluating and designing QIS systems and developing the system-level support and algorithms needed to fully exploit the new QIS architectures.

Launched in 2016, IBM Q is a cloud platform that provides companies, universities, and research labs around the world with the ability to perform quantum computations online without having direct access to a quantum computer. Credit: IBM.

“CSI has access to several online test systems, including the IBM Q quantum computer, and is actively using these systems for its research,” said Kleese van Dam.

In addition, CSI has been building relationships with leading experts in the field from various institutions, including the Massachusetts Institute of Technology (MIT), Princeton University, Harvard University, Tufts University, Stony Brook University, and the University of Toronto. Several of these experts now have joint appointments with Brookhaven, including MIT mechanical engineering and physics professor Seth Lloyd and Tufts associate physics professor Peter Love. 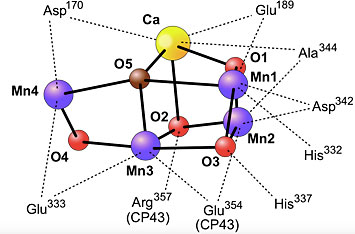 Proposed structure of the oxygen-evolving, or water-splitting, center of Photosystem II, a protein complex that executes the initial photosynthesis reaction. The center contains a cluster of manganese (Mn) ions, a calcium (Ca) ion, oxygen (O) atoms, and coordinating amino acids.

Through a separate collaboration, Brookhaven Lab and Harvard University are developing quantum-based models of biomimetic photosynthesis. Chemical processes that replicate and optimize photosynthesis—the process by which plants convert solar energy into chemical energy—could be used to produce clean and sustainable fuels and other chemicals.

“The natural protein co-factors that catalyze photosynthetic reactions involve multiple transition-metal atoms that exhibit strongly correlated electron behavior,” said CSI application architect and team member Hubertus van Dam. “An accurate description of this correlated behavior requires far more terms from different electron distributions than can ever be calculated on a conventional computer. Quantum computers enable the use of quantum matter to simulate the quantum behavior of these electrons much more efficiently.”

CSI has also created the Northeast Quantum Systems Center (NEQsys), a partnership between Harvard, MIT, Princeton, Raytheon, Stony Brook, University of Toronto, Tufts, and Yale. By leveraging the wealth of quantum expertise at leading universities and in industry, this collaboration seeks to impact a broad range of areas—for example, theoretical and experimental materials science and condensed matter physics, devices and system software, and algorithms and computational applications.

“This cross-cutting research effort will impact the entire quantum ecosystem,” explained Kleese van Dam. “CSI is providing knowledge integration across the hardware and software stack to impact work being conducted across the institutions.”