The following news release announcing the winners of the 2018 CyberForce Competition was issued by the U.S. Department of Energy (DOE) on Dec. 2. Brookhaven National Laboratory was one of seven DOE national labs that hosted college teams participating in the competition. Of the 66 participating teams, five came to Brookhaven Lab: Columbia University, New York University, Suffolk Community College, the United States Military Academy at West Point, and the University of Maryland, Baltimore County (UMBC). The first-place local winner at Brookhaven was UMBC. 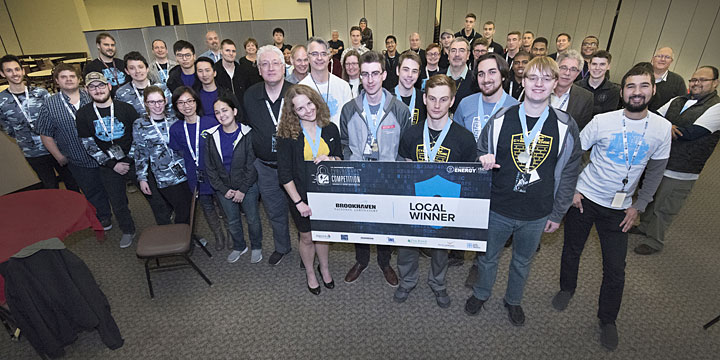 A team from the University of Maryland, Baltimore County (front center), was named the Brookhaven Lab local winner of the 2018 CyberForce Competition hosted on Dec. 1 by the U.S. Department of Energy.

WASHINGTON, D.C.—The U.S. Department of Energy (DOE) has announced University of Central Florida from Orlando, Florida as the national winner of DOE’s 2018 CyberForce Competition™. Sponsored by DOE’s Office of Cybersecurity, Energy Security, and Emergency Response (CESER), the CyberForce Competition is DOE’s fourth cyber defense competition designed to develop the next generation of cybersecurity professionals to help defend and bolster our nation’s critical energy infrastructure and ensure our energy security.

“The energy infrastructure we depend upon as a Nation is under the constant threat of cyberattacks,” said U.S. Secretary of Energy Rick Perry in a video broadcast to competitors across DOE’s national laboratories. “As the Sector-Specific Agency for cybersecurity in the energy sector, guarding against those threats is my highest priority, and this competition is becoming a key element in developing our next generation of cyber warriors.”

The CyberForce Competition challenged college and university students with defending a simulated oil transportation network, a power delivery system, and a high-performance computing system against attacks by experts at the National Labs, the private sector, and the National Guard. The challenge was augmented by anomalies and constraints designed to replicate those commonly found in real world systems.

“Developing the next generation of cybersecurity experts is a critical part of our mission within CESER," said Assistant Secretary for CESER Karen S. Evans. “The CyberForce Competition provides the opportunity for us to engage our future defenders and let them know we not only support, but also commend, their interest in a field that is critical to our national security.”

Winners of the 2018 CyberForce Competition include: